The last week has, once again, flown past. Today, accompanied by Tim who is coming for a holiday, I will be returning to Cyprus. I'm looking forward to seeing the family again and spending a few more weeks with my grandchildren, having all my descendants under one roof! But I'm really NOT looking forward to the heat, humidity and sheer exhaustion that overtakes me during the summer months. Apparently last month was the hottest July for the past thirty years in Cyprus. I am, rather selfishly, very relieved to have missed the last ten days of it.

However, I can't move on, blogwise, without mentioning a delightful restaurant where I was taken on my last Saturday in Alcester. It wasn't particularly close to the house, and in the opposite direction from a large computer shop we had been visiting in the morning, looking at laptops.  Indeed, if we had not known it was there, we would probably never have driven up the small road where it was located, nor necessarily even have spotted the rather modest-looking sign on the outside, letting us know that it was The Broom Tavern: 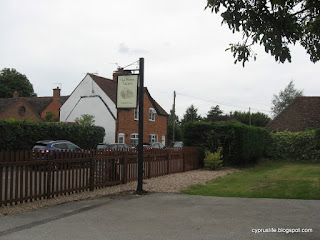 There was a small car park, but it wasn't immediately obvious where we were supposed to go. The house looked old; apparently it was originally a farmhouse in the 16th century. 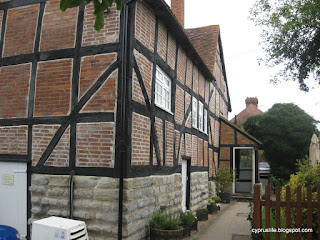 Inside the decor is attractive, with a very pleasant atmosphere. 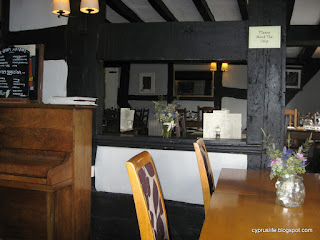 The menu isn't huge, but with a wide variety of options including some for vegetarians; they seem to be quite flexible, too. I'm not vegetarian, though I lean strongly in that direction; I learned a few months ago that I am a 'flexitarian' - one who mostly eats plant-based foods, but also a bit of poultry or fish when offered it by other people. Since I'm married to a confirmed meat-eater, and Cyprus culture really isn't  good at understanding vegetarianism (let alone veganism) I've opted for this, at least for now.

Anyway... one of the menu options was vegetarian chili with various side dishes, so that's what I opted for.  This photo, unfortunately, doesn't really show how stunning the presentation was when it arrived laid out on a wooden platter.  One of the black metal dishes contained rice, the other an excellent veggie chili. There were tortilla chips (clearly made from tortillas rather than bought in), guacamole, sour cream, tomato salsa, grated cheese, and salad. 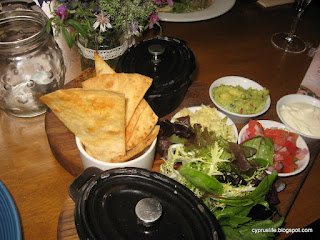 I didn't think I would manage more than half of it, but in the event, other than about half the rice, I ate it all. It was delicious.

My father, who is not vegetarian but highly intolerant of garlic, and whose appetite fluctuates somewhat, asked for a baked potato with baked beans and grated cheese.  That was also beautifully presented but the photo doesn't show it at its best: 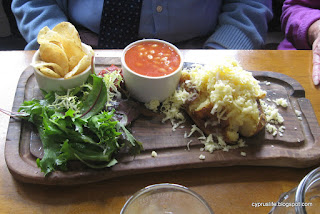 After such a large first course I wouldn't have opted for dessert at all, but my father very much likes desserts, and chose a fruity sorbet one - pineapple and melon were certainly involved, and he said it was delicious: 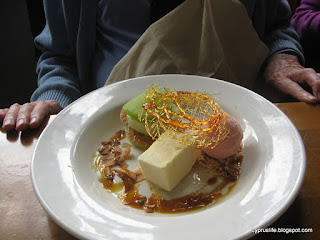 Lorraine chose a strawberry panacotta dessert; I might have gone for that, but the dish description mentioned balsamic vinegar, and that sounded rather odd.  It was also beautifully presented, and she said it was extremely good: 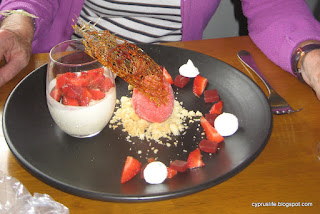 I decided, since they were having desserts, I would have the basic ice cream. Three scoops, they told me, with various choices.  I opted for two chocolate and one salted caramel.  I expected three scoops in a small dish, as one might expect in Cyprus. Instead, I was presented with this: 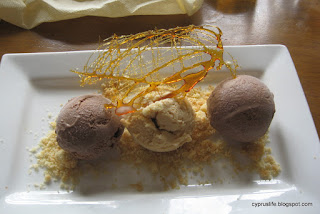 The odd-looking squiggles on the top of each of the desserts was a kind of crystalline spun sugar. A sort of hardened, flat candy floss, I suppose.  The chocolate ice cream was good, the salted caramel out of this world... I should perhaps have had two of that. It never occurred to me that anything could be better than chocolate.

Replete from this amazing meal, we took a short walk in the afternoon... 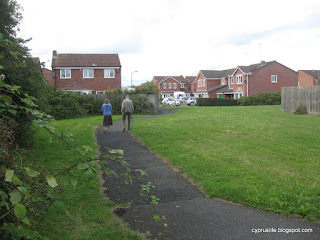 ...which included some blackberrying.  July seems rather early to me for blackberries, but there were lots on the local bushes, with plenty more to come.  Hard to see in the small version of this photo, but anyone interested in knowing what blackberries look like, just click the image and a larger one should appear. 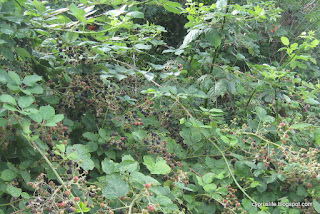 Sunday was a relaxed day. We went to a church service at St Nicholas' Church, then home for a roast lunch followed by apple and blackberry crumble. In the afternoon we played our fourth game of Settlers of Catan in which I really hoped I wouldn't win. In the first game, earlier in the week, I won rather too resoundingly. The second was much closer, and I only won because I picked up a victory point. I don't remember the details of the third, but I won again. I had tried a different starting strategy in each.

For the fourth game, I didn't have particularly good starting places, and decided to play the 'harbour' strategy. It worked all too well, but when I was approaching twelve points we decided I'd keep playing, opting out, so to speak, of the possibility of winning.  Eventually they both reached eleven points... and Lorraine eventually reached twelve and was declared victor: 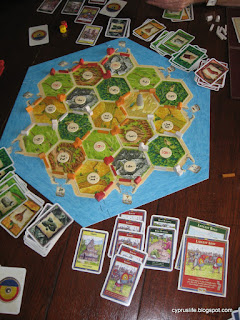 We then counted my points and I was slightly embarrassed to find that I had managed to acquire eighteen...

On Monday morning I made the train journey down to Surrey to stay a few days with Tim. It's a journey of about three-and-a-half hours by train, with three changes including a brief ride on the London Underground. I am always a bit anxious about the Underground as I haven't used it much and don't understand it... but all went well and I arrived safely at the station close to Tim's flat. What amazed me most was that the entire trip (three trains and one Underground), since I booked it in advance, cost me the grand total of £11.

In the evening, we played a game of Cities and Knights, and Tim creamed: sixteen points to my eight.

On the Tuesday we took further trains down to Sussex to spend the day with Richard's mother. It was the first day since my arrival when the sun had shone almost all the time, so we spent some time sitting outside, admiring her garden: 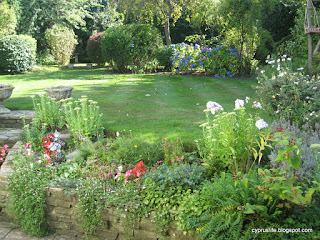 On the Wednesday it rained, off and on. I caught yet more trains, this time to Woking, to spend a few hours with my friend Anne, who is, as far as I can tell, my longest-standing friend. We met when I was seven and our family moved to Walton-on-Thames, as we were in the same class at school. We spent two years at Ambleside Avenue First School before moving to the larger Mayfield Middle School when we were nine.

After a year there, our family moved to Birmingham, and not long afterwards Anne's family also moved. We had agreed to stay in touch, and although our parents didn't expect us to, we wrote letters - pages and pages, sometimes - very regularly, at first, then gradually easing off to just Christmas and birthday greetings. Anne came to our wedding ten years after we parted, and at the time we said we ought to get together every ten years, but that hasn't happened. So it's over 37 years since we had actually met!

We talked endlessly, catching each other up on the past few decades' worth of news about family and friends. Then Anne drove me back to Tim's making a considerable detour through Walton-on-Thames where we went past the sites our our old schools (Ambleside Avenue is now a primary school, with rather different buildings; Mayfield no longer exists at all).

I had only the vaguest memories; my family only lived in Walton for three years, but I did vaguely remember the road where we used to live, and that our house was just around the corner from another school friend. I knew the address, so as we briefly slowed down, was able to snap this picture out of the car window. I'm pretty sure it's the right place, though I wouldn't have been able to pick it out if I hadn't known the house number: 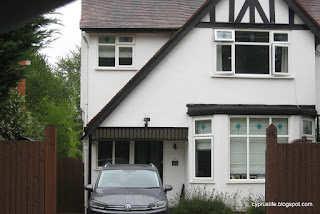 On Friday - yesterday - Tim showed me round the grounds of the school where he teaches, then we walked into Epsom, a nearby reasonably-sized town with a good set of high street shops. I particularly wanted to go to Lakeland, to buy some of my favourite breadmaking yeast, and one or two other things. I also went to several rather upmarket charity shops and was delighted to find yet more children's picture books that were not previously part of our collection.

In the evening, Tim treated me to Indian takeaway food, and then we had another Cities and Knights game. This time I did at least reach ten points before he won. 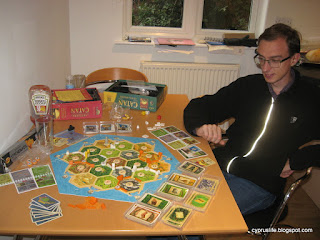 After that we sorted out a lot of paper recycling, printed our boarding passes, and even did most of our packing.

This morning we've cleaned and tidied everywhere, turned my bed back into a sofa, emptied all the rubbish... and were completely ready to go over two hours before we need to leave. This is a bit disturbing for both of us, so I decided to write a blog post, and Tim has popped out to buy a few essentials that he will need as soon as he returns.

You seem to have has a good time visiting family and frienmds. I love those sorts of holidays.