So long, farewell... as the family depart from Cyprus

Today, we said our sad goodbyes to our older son and his family, who have been here, staying in our guest flat, for almost three months. They're on their way to Canada for a week, to catch up with relatives, and then to Central America.

But I should back-track nearly three weeks. I returned home after a couple of weeks away, bringing Tim with me. It was wonderful to have an extra pair of hands.. and on the first Sunday he cooked most of our lunch, meaning I was relaxed enough to take a photo of our entire family - or, at least, all our descendants - together, probably for the last time in a couple of years. 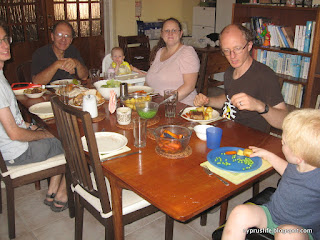 Tim loves to cook, and while he was here he made some of his classic one-bowl brownies, and some double chocolate chip cookies... he also made a batch of naan bread, assisted ably by David who loves helping in the kitchen.  There was a slight misunderstanding in that David thought they were making banana bread, but he liked it anyway. 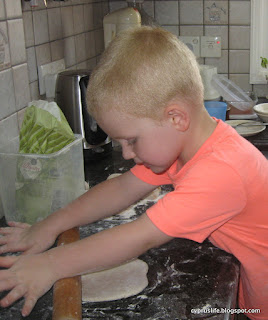 It's said that children really don't need many toys; that they play with new things for a few days, and then the enthusiasm wears off. David does love his little trains, and figurines from Postman Pat and other favourite stories, but he also spends a lot of time playing pretend games with whatever items he finds, inspired by his tremendous imagination. Here he is with my beanbag, which he first decided was a Santa sack, then a sleigh, and - in this photo - it became reindeer pulling a sleigh: 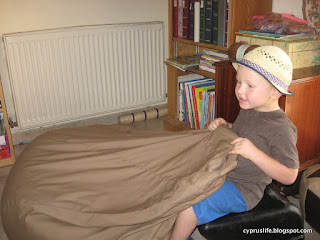 The cushions in our living room have been used, by turn, as sacks of corn, presents to be unwrapped, sticks for a barbecue, bread for sandwiches... and probably much more besides.

More recently David's been playing at going to Canada, so the beanbag became an aeroplane seat. I was amused when he produced a backpack that he'd found, and told me it was his 'hang luggage'. When I asked what he'd put in it, he looked at me with a 'duh!' expression, and said, 'Books!'

About a week ago, he suddenly announced that he wanted to wear a jumper. We were somewhat bemused - the temperature outside has been at least 32C in the shade for the last couple of months, and it wasn't much cooler in the house. But Becky thought it a good opportunity to let him try on the Postman Pat jumper I had made him for his birthday. I was worried it would be too small by now, but happily it fit him with some room to spare: 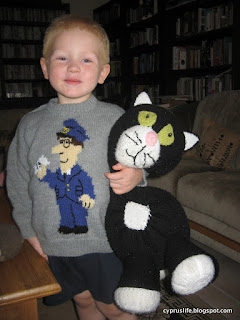 Esther, meanwhile, has mastered the art of crawling, and pulling herself up to standing, and she's started cruising around furniture too. 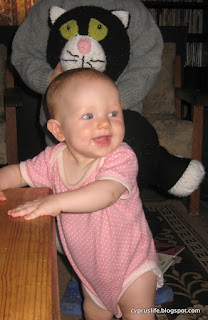 Before I left, attempts were made at potty-training David. Current wisdom is that around three is the right time to start for boys, if they haven't already shown interest. Daniel explained that modern nappies are so absorbent and comfortable that there's almost no motivation for most toddlers and young children to give them up, so parents very often have to persuade their children to go through a 'training' period, with 'toilet times' and stickers and all kinds of other motivational ideas.

While I was away, after a few false starts, they embarked on a full nappy-free week. David spent a lot of time sitting on one or other of the loos, with one of his parents reading to him.  (Richard asked if the choice of book in our upstairs bathroom was deliberate.... ) 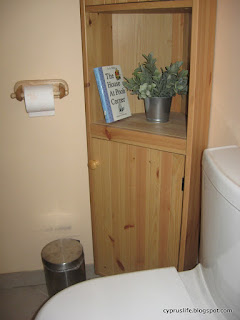 After what was, I gather, rather a traumatic week for all concerned, David had mostly got the idea and was beginning to ask to go. There were some accidents, but happily they've reduced significantly in the past couple of weeks.

The problem with August is that almost everything shuts down. In June David was able to go to some drama sessions, and the local toddler group.  In July, there was less and less going on... by August, almost nothing at all. He had really outgrown the Early Learning Centre Tuesday afternoon sessions, which didn't change much from week to week, and the indoor soft play places are too noisy and busy for more than the occasional visit.

In addition it was far too hot to be outside during most of the day, making the side yard less appealing. Sometimes in late afternoon David played outside, and a few times went to the park, plus Fridays to the beach with friends... but mostly we were confined to the inside, with air conditioning. Not easy for a lively child who wants to run around.

As with so many difficult periods of life, it sometimes felt confining and almost endless at the time, but looking back, the time has flown past. Suddenly it was their last Friday evening: 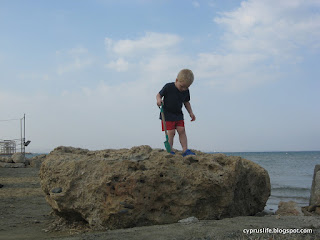 We played a last Cities and Knights game, all together, sitting outside: 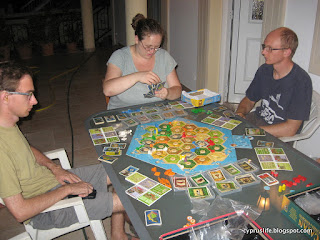 There was a last Tuesday morning. Most of my friend Sheila's children are away at a youth camp, but E (four years older than David) came over, and they spent the time making paper cakes and other goodies, and asking us to order things to eat and drink, which they then delivered on trays or cushions: 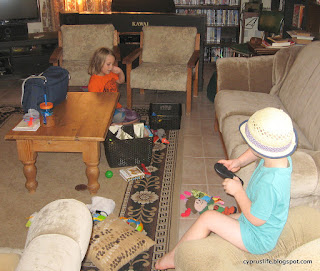 I continued reading to David for at least an hour every day; I collected the books I'd read aloud on one day, not long ago, and was quite surprised to find there were twelve: 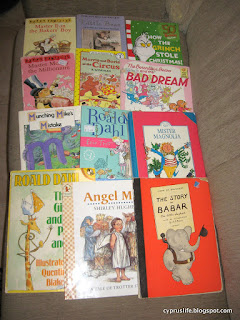 While most are quite short, a couple (the Roald Dahl ones) take over half an hour each to read.

On Wednesday morning, we all went to Richard's favourite ice cream place, and David had his favourite so-called 'Facebook' ice cream one more time: 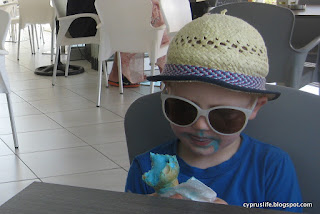 I shouldn't have gone, really. It was so hot out that I didn't feel well for about an hour after getting home again. In the afternoon we took Tim to the airport, to return to the UK.

Then this afternoon, it was the turn of the rest of the family.  They managed to get all their belongings into three large cases and one lighter one (plus hand luggage). Sheila helped with transport. Check-in was quick, so Richard and I didn't stay long at the airport. 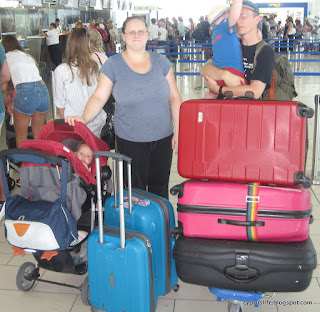 I'm pleased that they're on their way to the ship where they've wanted to return for some time, and that the details eventually worked out. I'm delighted they're able to spend a week seeing some of Becky's family en route. I've loved getting to know the children better, seeing them develop and pass milestones, enjoying David's wonderful sense of curiosity and imagination and hunger for stories.

Tomorrow we'll get the guest flat back to its usual state (one of the beds was dismantled in David's room, and the cot needs to be put away) and work out where to store the sand pit and toys.  On Saturday I hope to catch up with my book reviews blog, on which I'm about three weeks behind. On Monday I'll resume scanning negatives, and writing, and website updating.

Meanwhile, the house feels very quiet. I haven't done anything constructive since returning from the airport six or seven hours ago. I've shed a few tears, tidied away a few things, vegged out at the computer. I'm going to miss them all very much.

What a wonderful time you had!! I so enjoy hearing about your lovely family.