Yesterday, we bought a new freezer.

But before I write about that, I will temporarily jump back in time, eleven and a quarter years. We also bought a freezer when we moved to this house in the summer of 2006. We decided, then, to have a large upright freezer. It was an unbranded one; we bought it from a showroom called Dalco that wasn't far from here. It was good value, and the freezer seemed enormous. But we soon filled it up.

Its only problem was that it frosted up regularly. I took a photo (probably for this blog...) the first time I de-frosted it, about a year after we bought it: 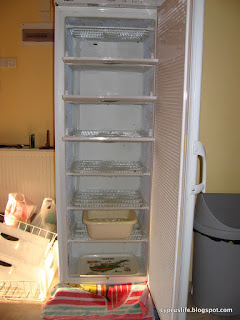 In a rush of nostalgia, I went through my photos looking for snaps of it, but there were very few. I suppose freezers aren't very photogenic.  The first one I found showing it in its place, at the end of our kitchen, was when we bought this useful Ikea table in 2008 and we put it next to the freezer: 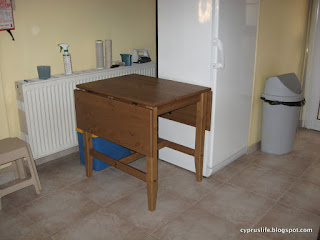 This shows the context a little better, with our greatly-missed cat Sophia testing out the new table: 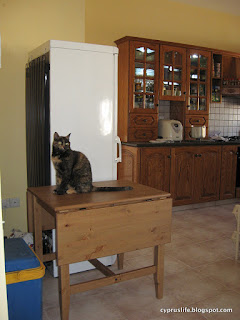 And there the freezer stayed, keeping lots of produce cold, needing little care other than de-frosting about once a year. I bought crates of fruit or tomatoes from the local fruit stall, lightly stewed and froze them. Healthier and a great deal less expensive than the canned equivalent.

I bought pitta bread on offer to go in the freezer, bags of frozen raspberries (since fresh ones are not available here), frozen puff pastry, and the occasional tub of ice cream. We kept a shelf for meat (mostly chicken) which we bought perhaps once every other month, and a shelf for vegetables - some ready-frozen ones such as peas or spinach, as well as my home-frozen tomatoes.  I kept one shelf for flour, beans and lentils; not that they need to be frozen, but food moths can be a problem in Cyprus, so I would always put new packs in the freezer until needed. And one shelf was dedicated to stock, made from meat bones or vegetables, and leftover portions of soups, which I make in the winter.

Here's another photo, from 2009. The table is still there, the bin evidently sat next to the freezer. The fridge is in the foreground; it has a freezer at the top as well, but I tend to use that for open bags of vegetables, and individual portions of meals left over from slow cooking. 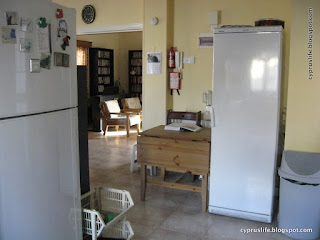 We never used the radiator that's pictured behind the freezer. At least, we didn't ever turn it on. We used it as a shelf for random boxes, or old batteries, or whatever needed a temporary space. And the area behind the freezer gradually filled up with plastic bags to re-use, and things to recycle... and it got messier and messier. 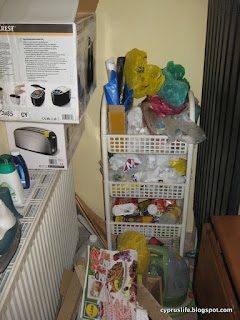 It wasn't just cluttered, it was a horrible and rather embarrassing mess. We decided that we needed something tidier that would hold all the plastic bags and recycling, now that Cyprus has a good recycling scheme.  We eventually found a chest of drawers in the Ikea children's department, and it was ideal. We put it behind the freezer, where it fitted perfectly, and (once I had filled it) that space started to look a great deal tidier: 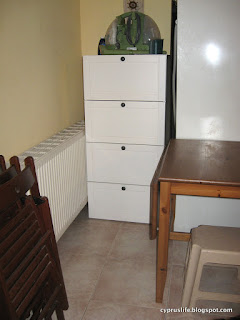 A couple of years later, when we acquired more bookcases, I decided to put one in the kitchen with recipe books and the potatoes and onions, right next to the freezer... which was looking a little battered and rusty by now. But still, for the most part, working well. 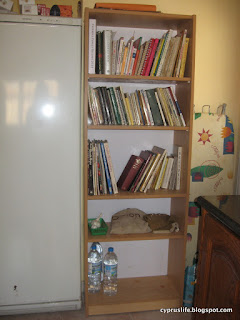 There was a glitch when I turned it on after a defrosting session, and nothing happened. But I hit it, and it sprang into life. Then the handle broke off... but Richard fixed that with some extra strong glue. Several of the shelf fronts had also broken off, not helped by the way it iced up so easily.  But it kept working, and was extremely useful during the past summer when the family were staying, even though it got left slightly open one night and iced up very badly. So I had to do a major de-frost shortly afterwards.

While some appliances seem to last for decades (our fridge freezer must be approaching fifteen years old) we realised that our tall freezer was nearing the end of its days. A week ago I noticed (thankfully) that it had gone silent, and the temperature gauge was showing almost zero. I hit it, and it started making a noise and grew gradually colder, but not down to its expected temperature.

We finished the last of the ice cream, and I moved the most critical things to the freezer at the top of the fridge. We talked about it, and realised that a new, more energy-efficient freezer would probably pay for itself over about three or four years, in electricity saving. Possibly even sooner.  We also decided that we didn't want to hang on until the old one stopped working entirely. We could lose a great deal of food if we didn't notice in time, and I was starting to feel quite stressed, continually glancing at the temperature, not wanting to open it in case it warmed up too much.

So on Friday morning, after checking the relevant website, we went to the local George Theodorou white goods shop. It's where we usually buy electrical goods now. They offer good value, they deliver at no extra cost, and on the rare occasions we've had to ask them to mend something, they have been efficient and not over-priced. We didn't even check any other shops, though I glanced at some of the regular junk mail that appears in our mail box, and realised that at other shops, prices were higher.

The freezer I had seen online was the one that the owner suggested. It's smaller than our other one, but there are only two of us at home most of the time. It doesn't have a temperature sensor, and the warning lights are inside the door, which seems a tad pointless, but we didn't think we'd find anything better. Most importantly, it's 'frost-free', which means that it won't ice up. No more de-frosting!

So we ordered it, and they said they would deliver later that morning.

I turned off the old freezer, then transferred the contents - it was about two-thirds full - to two biggish picnic cool-boxes and the fridge.  I just had time to clean the gunk that had accumulated underneath the freezer when the doorbell rang - our new freezer was being delivered. The men put it in place, and checked it... then took the old one away.

Then it occurred to me that it would make a lot more space, and look tidier, if we moved the freezer almost against the non-functional radiator, with the drawer unit next to it. I don't know why we never thought of that before. The bookcase now sticks out rather awkwardly, but the space is much better used: 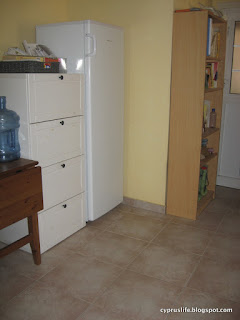 Modern freezers can be turned on at once, and we were told to wait a couple of hours before putting anything in.  So early in the afternoon I packed everything into the new one.

Well, most things. It doesn't look that much smaller than the old one, but it only has six shelves rather than seven. They're quite deep, but the walls are so well insulated that there's rather a lot less space in each one. So I had to re-organise somewhat, and just managed, with a lot of things still in the freezer over the fridge. It's more efficient having it full, and I need to be more careful about what to freeze - I discovered, for instance, that I had more than twelve 500g tubs of cooked tomatoes, and at least six of lightly stewed peaches.