Signs of Autumn in Cyprus

Once again, Summer in Cyprus is gradually coming to an end. To me, this is a great relief. By about mid-September the humidity had reduced to mostly bearable levels, but we were still using air conditioning during the daytime, if we had computers on, and for an hour or so after going to bed.

At the end of September daytime temperatures were still in the low thirties. Now, just a couple of weeks later, the daytime highs are in the 26-29 range. That's still very warm, and it's sunny, most of the time. But the house stays a couple of degrees cooler, and windows, cracked open or covered with mosquito netting, catch the breezes nicely.

We went to the local plant shop and bought some petunias and other bedding plants. It was perhaps a tad early; they don't do well in heat. But most of them have survived, providing some extra colour on our balcony and front patio. 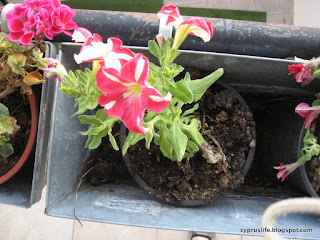 We had lunch with visiting friends last Sunday, and then suggested going for a walk. They had never been to the Pharos beach, which used to be a favourite walk of ours. I was interested to know how it looked; some months ago, the walk along the top was closed to visitors, with considerable construction going on.

In the Summer, I don't go outside, if I can help it, between the hours of about 9.00am and 5.00pm. But this was barely three o'clock, and not too hot. It was quite cloudy, although I grabbed a sun hat anyway.

As we were driving, it started to rain. It was only for a few minutes; we haven't yet had any heavy rain since the Summer, but it was perhaps the third shower since the end of September. As the sun came out through the clouds, a lovely rainbow appeared: 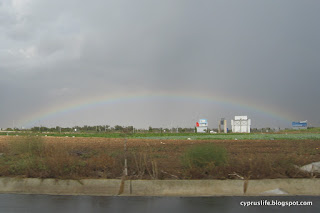 By the time we reached the lighthouse, the rain had stopped and the skies were blue again. The walk above the beach was paved, but the beach itself still looked deserted, with wild plants looking dry and brown after the summer. 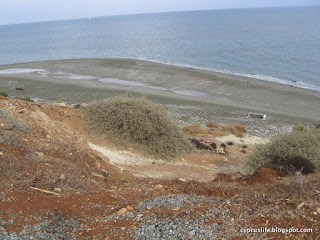 I kept in the shade as much as possible, but it was a refreshing walk despite being in the sunshine in the middle of the afternoon.

During the Summer, we sleep with just a cotton sheet over us. By the end of September we had moved to just a duvet cover. A few nights ago, we were feeling quite chilly, so I got out our thin duvet. I laid it across the cover, thinking it might be too warm, but it was very pleasant. Today, when I changed the sheets, I put the thin duvet in a cover.  It will probably only be a couple of weeks or so until we need the medium thickness duvet.

In the mornings, through the summer, I throw on the previous day's tee shirt and a pair of shorts that have seen better days. Then, after doing whatever cleaning or cooking I am doing, I shower and get dressed a little more respectably.  However, this week I have moved from old shorts to my sweatshirt trousers for the mornings.  I haven't got any sweatshirts out yet, but am quite looking forward to doing so.

This morning I made another batch of granola, and some ketchup. I cut up fruit for a fruit salad, and made a cake, as we're going out to a barbecue this evening. I cleaned the house, too, as well as making the bed and doing some laundry.  A few weeks ago I would have been quite daunted by all this. As I wrote in a previous post, just three weeks ago, when I was doing a lot in the kitchen on a Saturday, I had to keep escaping to my air conditioned study for a break. Today I finished everything in the kitchen by about one o'clock.

I love the onset of Autumn in Cyprus; sadly it's usually quite a short season. Within another month we'll probably be starting to feel distinctly cold....