Another brief digression from writing about life in Cyprus. With the slight connection that these books are all ones that I have in our collection (well over 3000 in all) and any local Cyprus friends are welcome to come and borrow books from me.

According to GoodReads and LibraryThing (where I upload ratings and brief reviews of everything I read) I have completed another twenty books. So that's eighty this year, so far, and I am on track - just about - to finish a hundred before the end of the year.

Once again, I'll divide the books into categories and begin with the Christian non-fiction. My aim is to read at least two of this category every month; this time I only managed three in all (I finished the fourth this morning, making my 81st book of the year). 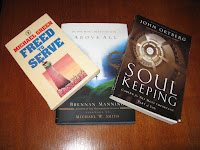 I began this period with a 1980s classic, 'Freed to Serve' by Michael Green. The author was quite a forward thinker, assessing what he saw as the way forward, if the church was to survive into the 21st century. Although it's not a long book, I found it quite heavy-going and only read a few pages each day. Quite thought-provoking, however.

Next I chose 'Soul Keeping' by John Ortberg. The writing is clear, and well-presented, with interesting, often self-deprecating anecdotes. I don’t know that I found any great new insights, but I found it encouraging and helpful in beginning to get a glimpse of what our souls are. Definitely recommended if you’re interested in this topic.

Then I read 'Above All' by Brennan Manning. The focus of the book is the well-known song of the same title. This was written as a devotional study of the words, and the theology behind them. Inspiring and encouraging, with a few personal anecdotes and much to ponder. A beautifully made book which would make a lovely gift, but very short. Highly recommended.

I usually aim to read about four novels per month, although it doesn't always work out that way. In addition to the eight listed here from the last couple of months, or so, I also read the teenage fiction listed in a separate section below, interspersed between them.

The first one in this period was 'When I Was Invisible' by Dorothy Koomson. About two girls with similar names, who have been friends since they were eight. A little confusing at first, but the tension builds up as things become clearer. Shocking in places, yet with an underlying theme about the importance of truth and loyalty. Highly recommended.

After such an emotive book, I wanted something light to follow. It was not difficult to choose an Adrian Plass from my books-to-reread-soon shelf, and I thoroughly enjoyed re-acquainting myself with 'The Theatrical Tapes of Leonard Thynn'. This book is third in the series that begins with ‘The Sacred Diary of Adrian Plass, age 37 ¾’. Despite having read it at least twice before, I found myself smiling several times, even chuckling aloud. Very highly recommended.

I next chose 'Laurie and Claire' by Kathleen Rowntree. Unsurprisingly, this is about two close friends of those names, who grow up together. It was sixteen years since I had last read this, and I remembered it as a very enjoyable read. I found it slightly sordid in places this time, and wasn't too keen on Claire. But it was very well-written.

For another light-hearted read, I opted next for 'Jeeves and the Feudal Spirit' by PG Wodehouse. I love Wodehouse's gentle satire. Literary references abound, and Bertie’s general ignorance would be irritating if it weren’t for his generosity and kindness. Very enjoyable.

Next I picked up 'Starting Over' by Robin Pilcher. An unusual setting: a farmer called Liz is trying to decide whether to allow an American firm to take over her land, and turn it into a golf course. The early chapters are a tad confusing with a lot of different characters, and there was maybe too much description in places. But all in all, I liked this very much. I had read it fifteen years ago, but had entirely forgotten what happened.

After that I chose 'Scandalous Risks' by Susan Howatch. I last read this in 2001, and it was probably my least favourite of the excellent Starbridge series about ministers in the Church of England in the 20th century. It's very well written, gripping and believable, but rather sordid and depressing in places, too.

I don't have many unread books on my shelves at present, but there are still a few. One of them was 'Clouds among the Stars' by Victoria Clayton. A brilliant opening sentence followed by some rather depressing and unpleasant chapters, covering issues not usually included in light fiction. It follows the lives of a big and bohemian family, narrated by the 22-year-old middle daughter. However, the writing is good, and it picks up after the first third; so much so that I could barely put it down by the end. I didn't think it was as good as others by this author, but still worth reading.

I followed that with another new book: 'The Secrets of Happiness' by Lucy Diamond. It's about two very different step-sisters who have never been close. But they're thrown together by a dramatic incident in the first chapter. Rather informal writing, with some excellent characterisation, even if some of the minor characters are a tad caricatured. My main grip is the excessive amount of bad language, which I found quite disturbing. Other than that, though, I thought it an excellent read.

Interspersed with novels intended for adults, I like to re-visit some of my childhood and teenage favourite. They are ideal for reading over just two or three evenings, when I want something well-written but very light. Along with re-reading my favourite novels, I'm re-reading my collections by favourite children's authors too.

An easy choice was 'Jane and the Chalet School' by Elinor M. Brent-Dyer. This series is some of my most important comfort reading, and this one is the 51st in the original Chalet School series. By the time I reach the end of the series, I will probably be ready to start from the beginning again. Most of this book is standard Chalet School fare with moments of high drama. But it didn't feel 'samey'. I liked it very much, and thought it covered some new ground. Only of interest to fans of mid-20th century schoolgirl fiction, however.

A couple of weeks ago I finished re-reading (for probably the sixth or seven time)'Good Wives' by Louisa May Alcott. It's a wonderful book, written as the direct sequel to 'Little Women'. It begins three years later as Meg March embarks on married life. Some humour, and a very sad, though inevitable chapter towards the end. Some moralising author intrusion, typical for the period, but even that is written a little tongue-in-cheek. Highly recommended for anyone who has read 'Little Women'.

More recently I re-read 'When the Siren Wailed' by Noel Streatfeild. This is an excellent story about some London children who were evacuated just before World War II. Realistic, showing the deprivation and fears of families in the war, and very well written. Highly recommended for anyone interested in this topic, adults or older children.

Once again, I'm including 'chapter' books I read aloud for the first time to my three-year-old grandson, who was here with his family until almost the end of August.

I was a bit surprised when this book arrived in my lap with a request to read it, but my grandson was very taken with Dick King-Smith's 'Mr Ape'. I read it at least three times to him, and others in the family read it aloud as well. It's the story of an elderly man who lives on his own, and gradually starts to keep more and more animals in his large stately home. Good writing, with an enjoyable pace and quite an exciting climax.

We then moved on to 'The Hiccups at No 13' by Gyles Brandreth. I must have picked this up at a charity shop somewhere, and had not previously read it. It's the story of 9-year-old Hamlet Brown, whose family are all actors. And Hamlet gets a bad attack of hiccups... It's quite amusing, and I think I enjoyed it as much as my grandson did, at least the first time I read it aloud.

I then decided we would embark on 'Sophie's Adventures' by Dick King-Smith, the collection containing the first three books in the series: 'Sophie's Snail', 'Sophie's Tom' and 'Sophie Hits Six'. They're about a small but determined girl who wants to be a lady farmer when she grows up. I have read these aloud to other children, though they are usually rather older than three, and I enjoy them every time. Great characterisation and plenty of humour. There's even some low-key educational information about farms. Very highly recommended.

Then I was persuaded to read 'Esio Trot' by Roald Dahl. I had enjoyed the Dahl books I read aloud in the previous period, and this is also intended for younger children. It's the story of an elderly man who lives in a flat and falls in love with the lady on the floor below him. However her passion is tortoises... the plot is ridiculous, in typical Dahl style. There are delightful line drawings by Quentin Blake every few pages, but the story involves deception and the mis-treatment of tortoises. Perhaps I’m over-thinking it, but I really didn’t like this story much, and wouldn’t recommend it.

And just in case it seems odd to be reading books of this kind to a child of three, I should add that we also read him large quantities of pictures books intended for younger children, including most of the ones shown here, among others. Dr Seuss, Shirley Hughes, Beatrix Potter, Mick Inkpen... and many more. I love children's books! 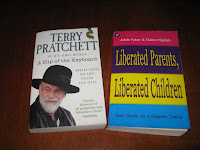 I try to read one or two other non-fiction books each month. I didn't manage to complete any writing books in this period, but I did finish a couple of other books that don't fit in any of the above categories.

The first is 'A Slip of the Keyboard' by Terry Pratchett. This is a collection of his speeches, book introductions, and other short non-fiction pieces produced over many years. Inevitably there's a lot of repetition as he didn't say new things every time he gave a speech or wrote an article. It took me ages to get into the book, and I found the final section (after his diagnosis with Alzheimer's Disease) rather depressing. But all in all, I was glad I read it, to gain a few more insights into his life.

I think picked up 'Liberated Parents, Liberated Children', by Adele Faber and Elaine Mazlish, a book I'd bought second-hand at some point. I've read and very much appreciated some of their other books about communicating, particularly with children. This one is written in semi-fictional form, describing family situations and their resolution (or not...) after using some of the techniques the authors espouse. My sons are now adults, but some of the suggestions are appropriate when dealing with any communication breakdown, or apparent deadlock in a disagreement. I finished it in just a few days, and would recommend it very highly.

I set my target to read 50 books a year, and this time managed to surpass it, biut not by much. Most years I manage about 30-40 books, so your 100 seems way beyond my reach.