Winter and Christmas preparation in Cyprus

I have evidently been neglecting this blog recently. I've been busy with various things, and somehow blogging has slipped off my radar. My last post was early November, when I was writing about October. Since then, winter (such as it is in Cyprus) has appeared, and Christmas will be here very soon. So here's a brief summary of the past six weeks or so:

The temperature always takes a downward turn around the second week of November. So around that time I got out our two cat beds. I made one of them, a few years ago, and we bought the other one. To my surprise, the cats decided to sleep in them.  However, Alex, who is really quite a large cat, squashes into the smaller bed: 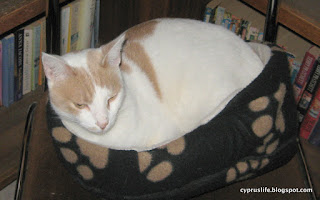 While Lady Jane, his petite sister, spreads out comfortably in the larger bed: 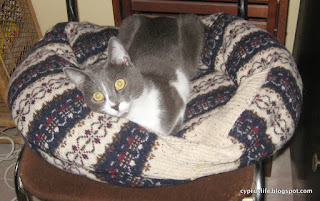 On November 20th, we went into the large and somewhat random shop Kleima. I forget what we were looking for, but we spotted some large poinsettia plants at just €4.99.  We usually pay more than that for much smaller ones.  It felt much too early for a plant we consider to be a Christmas decoration.  And I was dubious about buying it from Kleima; the shop isn't known for great quality. But somehow we decided to buy one anyway.  The pot was a little small, so I re-potted the plant: 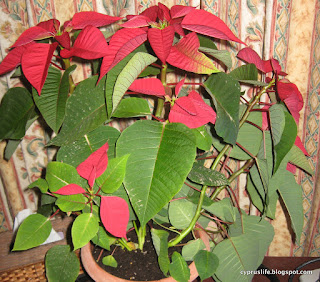 In the process, a couple of the stems fell out. They didn't break off, or anything; they were stems that had apparently been pushed into the soil to bulk the plant out a bit. I trimmed them and put them in water.  Over the next few days, I noticed other stems starting to droop... and on gentle pulling, found that they, too, were just loose stems.

However, the actual plant, while considerably less voluptuous than it originally appeared, has survived well and is looking good.

Our closest friends here had been away for over two months, so although winter was approaching I hadn't done any early morning walks in October or November. But they returned at last, and I woke early enough to see a sunrise on November 25th: 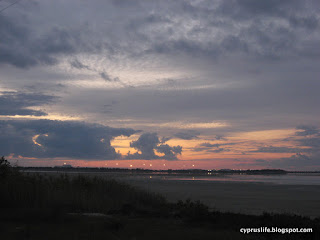 A few days later, it was my turn to travel, though I was only away for a week.  My flight was quite early, though after sunrise; as I looked out of the plane window I spotted part of a rainbow: 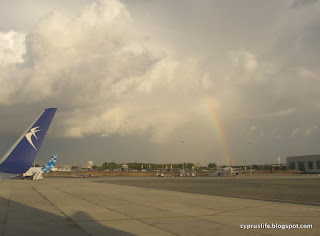 My trip was to the UK, in order to help my father celebrate a special birthday.  While there, visiting a garden centre, we saw this display of mechanical toys: 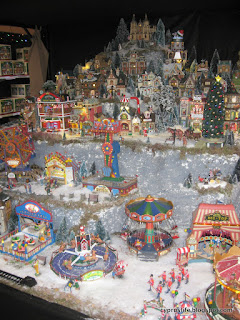 They were delightful to watch, but then we saw the boxes. Each one cost at least £30, some of them more, and one alone would be rather dull. They're not toys, and they're the kind of thing one would only get out at Christmas. They were a great display for the garden centre, but I did wonder who might buy one!

At the weekend there was a family party, with twenty of us in all, and a magnificent cake made by my father's wife: 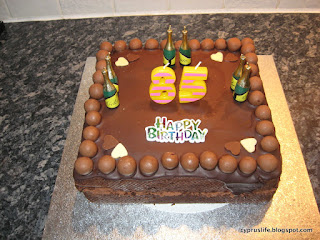 Since I was seeing my siblings and their spouses, with whom we still exchange gifts at birthdays and Christmas, I did all my Christmas shopping online before I flew out. I then wrapped everything, and distributed appropriately.  I also wrote all the Christmas cards for UK friends and relatives, and got our newsletters printed and posted too.  I even made this year's Christmas puddings and mincemeat before my brief trip.  I don't think I have ever been so organised, and it was a good feeling.

A week after my return to Cyprus, the Christmas season was well underway.  The Larnaka Christian Writers' group had our annual Christmas potluck lunch with lots of good food and enjoyable company: 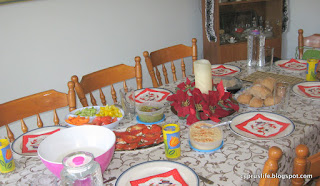 Among other things, I took along some of my first batch of mince pies.

Then, the following day, Sheila's daughters helped me to decorate our Christmas tree, something which has become an annual tradition: 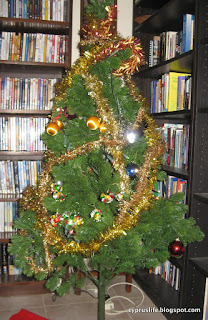 A couple of days after that, Richard and I celebrated the 40th anniversary of our first date.  We had a take-away lunch, had some professional photos taken, and saw some of the lights of Larnaka: 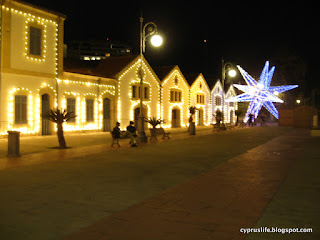 In the evening we went out to eat, and then - along with many other people - took photos of this rather strange giant bauble at the end of the small pier: 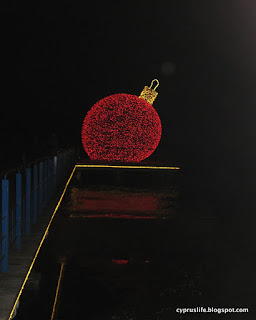 At the weekend, I hung up last year's Christmas cards, something else I do each year since so many don't arrive until January. And I sewed up another shepherd I had knitted for our Nativity scene: 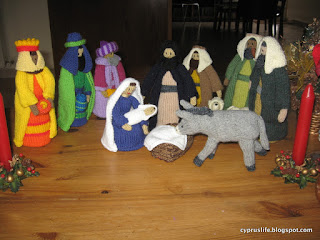 I made the first of this season's lemonade on Saturday, after buying a crate of thirty lemons for a couple of euros. On Sunday I made the second batch of mince pies, and some veggie 'sausage' rolls for freezing.  On Monday I made some gingerbread and chocolate chip cake.  I also opened up and made up the sofa bed in Tim's room, which made Jane very happy: 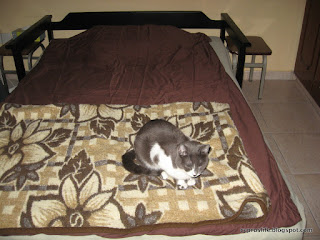 Tim arrived last night and she was even happier. He has always been her human of preference.

The house is not as warm as we'd like because one of our central heating pumps needs to be replaced. We've bought the new pump, but the central heating engineer recommended by the shop hasn't come to fit it, though he said he would do so yesterday evening or this morning. However it's not particularly cold out, so an extra jacket is sufficient, at least at present.

I hope to write another blog post on Christmas Eve, as I tend to each year, and will then make a 'resolution' to write at least one post per week in 2018.
Posted by Sue at 21:23

In South Africa poinsettias are usually a Pentecost decoration, with their reminder of tongues of fire.