We were invited, for the first time, to a Greek Orthodox Christening service, on Sunday. Like Anglicans, babies are baptized in the Greek Orthodox Church, although it usually seems to be when they are around six months old. It's much more of a big ceremony; in the Anglican Church, at least our traditions, dedications and baptisms of infants take place during regular morning services, to show that they are a part of the church family. The ceremony takes perhaps ten minutes. In the Greek Orthodox Church, however, the ceremony lasts an hour - and that without any congregational singing, nor even a sermon. So it's done as a special service, usually at 11am after the ordinary service has finished.

We'd been invited by text, to St Lazarus Church at 11am, with various reminders. We weren't sure what to wear, but decided that smart trousers for Richard would be better than jeans, and I thought that, since it was reasonably warm, I should dig out one of my skirts and a pair of sandals.

Thus arrayed, we arrived at St Lazarus Church at almost exactly 11am. We realised that most things don't start on time in Cyprus, but expected to see a few folk we knew... 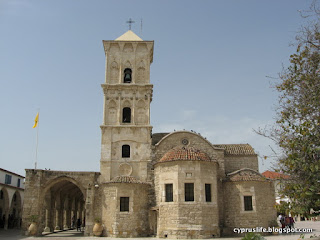 People were just coming out. We saw someone we knew... but he wasn't connected with the christening. He said it had been a longer service than usual as the Bishop was there.

So we wandered about, peeping into the church every so often. It's quite a tourist attraction so there were visitors going in, looking around, and going out again.

Eventually we walked up the road to our friends' house, and Richard found them still there. Apparently the Christening was at 12, not 11... somewhere he had missed a text message.

So we went down to Alexander's on the sea-front, and had some coffee. At least, Richard did. I had my first frappé of the year. Very pleasant it was, too.

Then we headed back to St Lazarus, and got there about 11.50. This time the Christening party were there, so we went inside. Did we have to sit separately, we wondered? Apparently not. Were we allowed to take photos? Yes, no problem.

At 11.55 the service started. There were only about 15 people present including the family... but it was all quite informal. Other guests arrived around noon, or even later. By the time it ended, there were probably 30 or 35 people there.

The whole thing was in Greek - probably Ancient Greek, so we didn't expect to understand it. The mother isn't supposed to touch the baby at all; instead she's held by her godmother. The priest was reading something from a book, presumably some kind of liturgy. 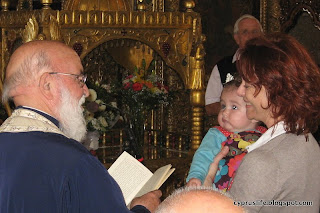 At one point, the godmother had to give some responses - and I even caught a few words. They sounded similar to the promises made by Anglican godparents, although they were repeated three times rather than just once. 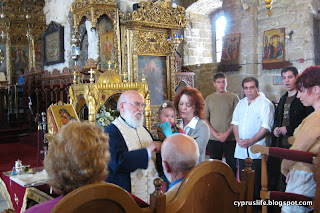 Up to this point, it all seemed fairly familiar despite being in a very ornate building in a language we didn't understand. Everyone was happy, and the baby was doing well.

Then she was taken away from the main area, and her clothes removed. Was she going to change into a special christening outfit...? No. Instead, the priest anointed her with some special oil. She was not impressed. She started crying... and the only person who was able to hold her was her godmother. Apparently, once this part of the ceremony begins, if her parents touch her she becomes unclean and the whole thing would have to start all over again. So they just had to watch and listen while their little one became more and more distressed. I'm not sure I could have gone through with it if it had been one of mine.

After the oil, the baby was immersed three times in water. She went in right up to her neck, and water was then splashed all over her head so that she was, basically, fully immersed. By this time she was screaming continually... and this is not a baby who usually cries much at all. 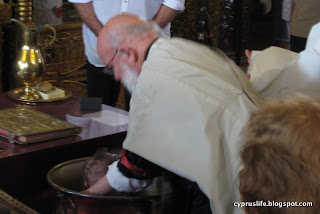 She was then dried, and while we couldn't see everything that was going on, I think there was more oil put on her, and more liturgy said. Then the priest cut off some of her curls. We asked afterwards why that was, and nobody knew. She was dressed in a pretty (but not very comfortable looking) Christening gown and hat, and gradually calmed down in her godmother's arms, although she started crying again whenever she caught sight of the priest. I'm sure he's a very nice man - he seemed friendly, and apparently apologised to the baby's father... but said it all had to be done properly.

Towards the end, a young lad carrying a candle accompanied the godmother and baby as they walked around the table while the priest swung some incense and said more liturgy. They stopped several times in different places; I've no idea what the significance was. 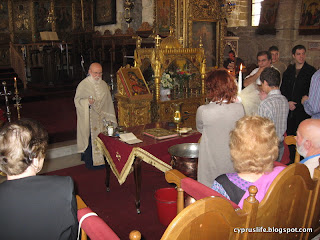 The whole thing took about an hour. It was an interesting experience for us, traumatic for the baby, and devastating for the baby's mother!

However, the baby was then taken home for a feed and a nap, after which she recovered fairly quickly, and the rest of us were given a sumptuous spread, prepared by some of the baby's relatives.

The sun shone, and it was pleasantly warm. Richard was getting over a nasty cough and I was getting over an unpleasant sinus infection, but we both felt much better as we sat and chatted with people we knew, and enjoyed the excellent food.

We left about 3pm, and when I got home it was chilly enough that I changed into jeans, socks and trainers pretty quickly!
Posted by Sue at 15:51

Nice post. I think you have been a bit unfair by only mentioning the sumptuous spread in a line or two. After all this is the reason most Cypriots are there for :)

In the Orthodox Church traditionally, the baptism is during the liturgy (that's how my girls were done), but in modern times, families want it separate. The hair is the baby's first offering to God. My children were baptized at 3-4 months, which U.S. Greeks thought was early. I prefer that so the head is stable, but the child is young enough not to scream while being submerged. My second one didn't cry at all. The first oil is concecrating the baby (plus some other meanings). The second oil is chrismation (akin to Anglican confirmation). As far as the parents not touching the baby or risk staring over again, that's nonsense and probably just misunderstanding and superstition. The baby also should have received communion. There is also the baby being dedicated behind the altar, but traditionally, that's only boys.

Yes, christenings here can lead to traumatised babies and mothers -- I've photogrpahed quite a few, including a twins'... If the abby knows the godmother and the priest, things can go pretty smoothly, but we had one here recently (Cypriot father, Bulgarian aetheist mother -- doing it for husband, resident in the States) who came to get the baby done in Ye Olde Home Village... There were Ructions! Both from the baby and the mother who had no idea what was coming and ended up storming out of the church demanding a divorce! (I think they sorted it out in the end, but Salamiou (the village) had wagging tongues for quite a while!

Will get the book to you later this week.

The fiorst part consists of four exorcisms. Before we can turn to Chrisdt, we have to be loosed from the power of the devil (see I John 5:19).

Then the candidates (and their sponsors) face west, say three times that they reject the devil, all his pomps and all his pride, and breathe and spit on him.

Then they turn to face east (literally convert) and accept Christ as king and God, and bow down before them, and say the creed.

Then the priest blesses the water, and the candidates are anlointed with the oil og gladnerss, though babies, you noticed, are not usually ver glad at that point, though adults usually respond differently. Then comes the baptism, by triuple immersion. Then chrismation (anointing various parts of the body and the prierst says "The seal of the gift of the Holy Spirit". It is, as anaonymous pointed out, the equivalent of confirmation.

Then the newliy baptised put on clean white garments (in Anglican services that is called chrysom), and they are tonsured, that is, theur hair is cut in the sign of the cross, to show that they belong to Christ -- first tithe, if you like. And then girls are taken three times round the table and boys are taken three times round the altar by the priest, to show that they are servants of Christ.