Flamingoes by the Salt Lake... and a few older board games

After a fairly dry and mild end to last year, and indeed beginning of January, the weather turned colder about ten days ago. We had some torrential rain - when it decides to rain here, it doesn't usually drizzle gently. It pours... I don't know if it's helped the reservoirs, which once again are much lower than they ought to be, but it's certainly helped the ground and the wild flowers locally.

On Tuesday morning, I grabbed my camera as I set off to walk with my friend Sheila; it had stopped raining so I knew it would be muddy, and hoped we might see a few flamingoes on the Salt Lake. The sun was shining and there were puddles every few metres, which we mostly managed to avoid: 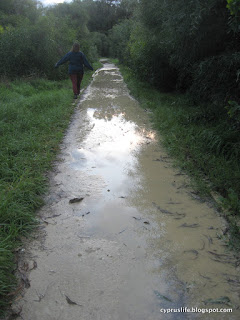 Some years, the Salt Lake is quite full by this time of year, but even after a couple of days of extensive rain, there's still a lot of 'beach' showing: 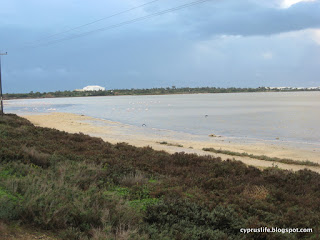 We quickly saw flamingoes, although in this picture they just look like pink dots: 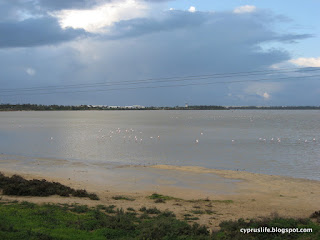 Here they are a little closer - there are thousands of them! 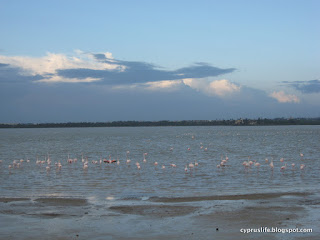 As we neared the Airport Road, we walked down onto the sandy area near the lake, and saw these baby flamingoes, still white rather than pink.  If you look carefully, you'll see a long row of pink ones in the background too: 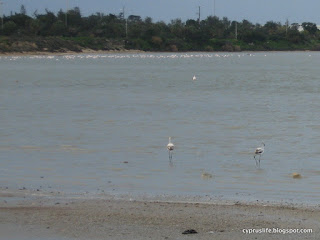 We managed to get closer than I've ever been before without disturbing the birds: 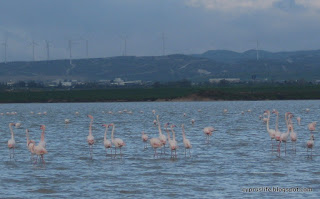 However, although they didn't display any alarm, they did start walking away. And as we were trying to get closer still, as stealthily as possible, we were startled by a shout to keep away by someone with a large camera, perhaps a journalist or other professional, who was trying to photograph them from the road. 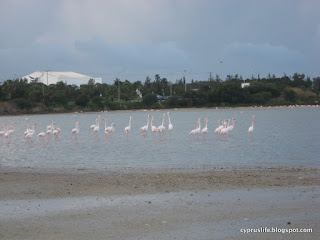 As we returned, we saw odd markings on the sand - evidently flamingo footprints! 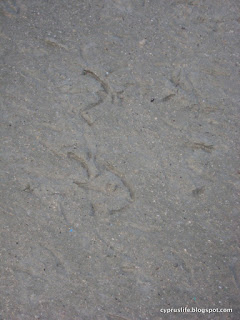 We finished the walk, then sat and chatted for a few minutes on our garden swing, as we usually do. Then Sheila departed as two of her daughters had to get to their piano lessons, and I sorted out our breakfasts. Around ten o'clock Sheila's daughter K arrived with some knitting which had gone slightly wrong; so I helped her un-knit a few stitches and set her on the right path.

Shortly afterwards Sheila arrived with her two youngest daughters, after their piano lessons, and they decided to spend a couple of hours building and playing imaginary games with Lego.  K started reading one of my Chalet School books... so I suggested Sheila and I play some of my older two-person board games, which I recently brought up from our guest flat. I had planned to teach them to her daughters but they were all otherwise occupied.

We started with Quandary, a game which apparently originated in the early 1970s. I remember playing this regularly with a close school friend when she was at our house in my mid-teens.  It's a simple game to learn, but quite complex to think ahead. We played three rounds, all of them fairly quick: 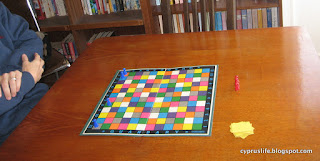 I then opened Octago, a game which I don't ever remember playing.  Apparently it came out in the mid 1980s, so either it belonged to one of my sons, or - more likely - we bought it at the Thrift Shop when we moved to Cyprus. It's a game a bit like draughts/checkers, with the variation that pieces can turn rather than (or in addition to) moving.

It was quite a good game, though neither of us really worked out any strategies. I won in the end, but it took me a lot longer than it should have done to capture the final piece. 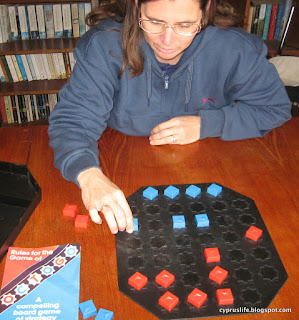 I then got out Kensington, a game which apparently didn't come out until 1979. I had thought it was earlier than that. It's very efficiently packed, in what appears to be a record sleeve (for those who remember records...).  I don't remember being particularly good at it - and, indeed, after initial frustrations as neither of us were getting anywhere, Sheila won rather resoundingly... 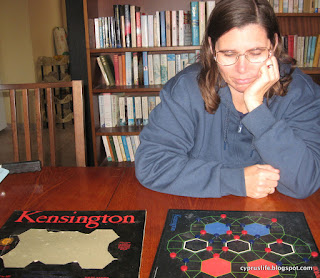 We were interested to note that Octogo claims to be for ages six and older, Kensington for ages seven to 107, and Quandary for ages ten plus.  We thought that Quandary was probably the easiest of the games to understand, and the one most likely to be enjoyed by Sheila's daughters at some point.  I would have rated it 7+.  Octogo, we thought, was a bit more complex and easier to make mistakes; probably fine for a game-playing child of seven, but I'd have rated it as 8+.  As for Kensington, it's quite a long game and difficult to get anywhere.  I wouldn't really recommend that for anyone under the age of ten.
Posted by Sue at 18:15