A fortnight in January in Cyprus

I decided I would write a blog post each Saturday this year. I managed it once.  I'm not sure what happened last Saturday, but evidently I didn't write anything. I haven't taken many photos this month, either. Rather a contrast to last Summer, when the family were staying and I took several photos on almost every day.  One of the things I've been doing is creating our 2017 photobook on the Photobox site, a few pages at a time. I've reached the end of June, which has almost as many pages as the first five months put together.

Nearly two weeks ago, we had our friend Jacob and his employee Mike back for a few days to do some more repair work on the house. They painted balcony railings, and the spiral staircase we have outside our house, and they 'spritzed' some of the back wall. They made a cover for one of our water tanks, which was - for some strange reason - missing its cover, and they worked with Richard to encase all our external wires in trunking. One of the cables had almost perished in the sun; it should have been encased a long time ago.

We've continued playing board games regularly with our friends, and on Tuesday this week revived an old habit - we played Settlers-by-Facetime with our son Tim, who now lives in the UK.  It took a while to get everything set up and working as we hadn't done this for some years; I think the setup took as long as the game. But it worked well, and was great to have a three-player game, and chat, even if he's two thousand miles away. 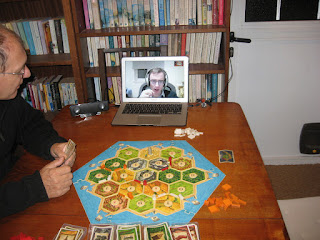 On Thursday, we woke to grey skies. Sheila and I went for our walk, although the trail was somewhat muddy and there were a few spots of rain. Within about half an hour of getting home, it started to pour.  Thankfully I had brought in the laundry I did the previous day. In Cyprus, when it does rain, it can be torrential.  There were high winds and hours of rain; the sun came out briefly a couple of times, but mostly the sky was grey. We had a few drips of water through the roof, but mostly it was fine. We had to use our electric water heater to get hot water for showers, as there was no solar heating at all. And it was cold. It had been a mild winter so far, but the house felt very chilly.

Yesterday Richard did the annual UK tax returns. It's not a task he relishes, though I do the bookkeeping through the year so it isn't too hard to get the figures we need to enter. He was quite frustrated by the whole process, as the UK government website seemed to be extremely slow. However, he finished eventually, and in celebration I made his fifteenth cake (out of sixty) for his 60th birthday year. It was a simple microwave chocolate mug cake with Bournville chocolate squares pushed into it; a little dry, but the melted chocolate helped: 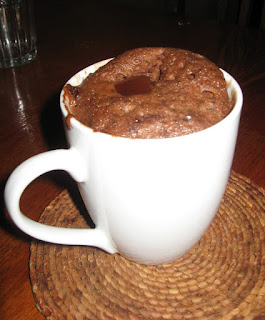 It filled the large mug we bought for this purpose, and made two good sized portions: 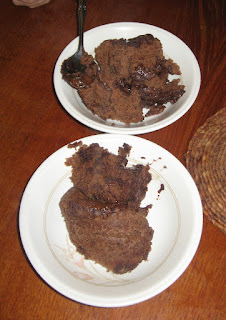 In the afternoon, the entire Internet seemed to slow down. I don't usually notice when it's a bit slower than usual, but I was trying to print the statements from our two bank accounts and credit card, and I couldn't get some of them to load at all. No problem with the Cyprus bank, but the UK one, which is usually very quick, was unbelievably slow.

Richard, meanwhile, was trying to download some videos for work, which he had to edit. He was already somewhat frustrated as the work computer had broken down twice in the past couple of weeks. The first time he took it to Nicosia and they cleaned something; the second time, they took it to the Apple dealer, who said it had a hardware fault and they would replace it free of charge... which is fine, but meant Richard was without his main editing computer for several days. So he hooked up his laptop to the system, which wasn't entirely satisfactory... and then the Internet appeared to grind to a halt.

He phoned our Internet provider, and they said that two major cables that connect Cyprus with the rest of the world had been cut.  This news article confirms it. The authorities don't seem to know why... but by this morning, thankfully, it seemed to be much better.
Posted by Sue at 19:36