Overuse of plastic in Cyprus

At the end of the catch-up post I wrote last week, I mentioned that Cyprus was supposed to be reducing the amount of plastic used. It's such a problem here that I think this topic is worthy of a post in its own right.  Plastic bottles and some cartons are recycled here; I just put out our last month's worth of paper and 'PMD' (plastic, metals, drinks) recycling, before starting this post, and was struck by the irony that we have to place our items in designated non-recyclable plastic bags.... 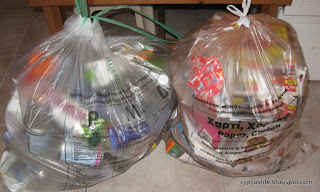 Whatever people think of the problems of global warming and wherever they stand politically, I don't think there's any doubt that we humans use far too much unnecessary plastic. A lot of it ends up in the sea, and causes serious damage to marine life. If you haven't seen the stories (and some horrific images) then a quick online search for 'marine life plastic' (or similar) should set the scene.

One issue which recently hit the news is the over-use of plastic straws. When we were in the UK recently I looked for paper straws, which I remember from my childhood, but could not find them. There are some available at vast price online, but mostly intended for parties, with bright patterns and colours.  They did not appeal. I've seen re-usable straws made of metal or silicon, but am a tad dubious about the difficulties of washing them sufficiently between uses.

We don't use straws in the winter, but in the summer I make frappés rather than hot coffees after lunch, and we like to drink them through straws.  I was wondering if we could learn to drink them without straws at all, when I came across an article online about a restaurant which had started using straws made of pasta.  When we were in Metro I checked what was available - we don't cook pasta, other than wholegrain spaghetti and the occasional lasagne, so I had not previously looked - and found that long macaroni was available. It was even on special offer.  Sealed in plastic, of course... but still, we thought it worth trying.

The weather has been hot, so we've been drinking frappés for the past couple of weeks now, and have become quite accustomed to these longer-than-usual but very effective straws:

We can't decide if there's a slight taste to them or not. It's not a problem, anyway, and even though we have to throw them away after each use (we tried rinsing them out but they cracked and couldn't be used again) they are biodegradable.  If a family who eats this kind of pasta used them, they could probably rinse them out and store them in the freezer until there were sufficient to cook for a meal, and that would be even more efficient.

One of the biggest uses of plastic used to be the flimsy carrier bags given away by supermarkets. I say 'used to be...' because in most of Europe there are now charges for carrier bags; customers are encouraged to bring their own, either stronger re-usable plastic ones, or those made of cloth.  I recall a bit of negative muttering about it when this was first introduced in the UK, but most people are reasonable, and if nothing else could see that it costs something to produce each plastic bag.

In Cyprus, however, we tend to lag behind most of mainland Europe.  At the end of 2010 when Lidl supermarkets first came to the island, they were unusual in not giving away free carrier bags. We were not in the habit of taking our own at the time, and found this a bit irritating, but realised it was reasonable. We bought some of their heavy-duty carriers, and once or twice bought the inexpensive ones. We only went there rarely, at first, anyway.

Almost a year ago, Cyprus was warned that it should do something about the immense amount of plastic wastage. We read that a 5 cent charge on carriers would be imposed from 1st July 2018, and that in January supermarkets could introduce a 2 cent charge, to help customers become used to the idea. We decided to make more of an effort, so it's now become a habit to take cloth bags with us either to supermarkets or the local fruit shop.

I don't know what can be done about the small produce bags which are used in the fruitarias.  Here's a typical few euros' worth of fruit and veg: 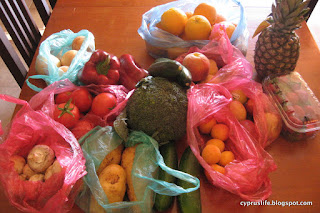 I don't put everything in produce bags, but when buying - for instance - apples or oranges, it's important to use either the pink, green or blue bags because they're a code for the cashiers, to establish which aisle they're from. I use a lot of 'pink bag' produce, in the reduced section of the shop.  Even if that were not a problem, it would be impossible for them to weigh everything separately if I simply piled my selection into a trolley without bagging items separately.

However, even reducing the main carrier bags should make a difference.  We assumed that when the shops opened after the New Year break, they would have a two cent charge for carriers. But January came and went, and carrier bags were given away just as they had been before. Cashiers no longer started putting things in carriers automatically, or not so readily - but perhaps that's because they got used to us, and some of our friends, taking our own bags.

In the UK, prior to the introduction of the charge for plastic bags, a lot of the supermarkets ran promotions on 'bags for life', and cloth bags with logos. We haven't seen any of those here, until - as mentioned in the previous post - we saw an advert in Metro for trolley bags.  They seem to fit any large trolley and we think they're a great idea. So here's another photo of them in use: 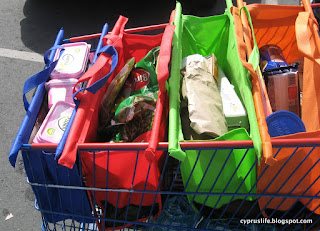 Cutting down on plastic is a slow process. Each family who adopts a cloth bag or non-plastic straw may feel as if it makes no difference; but, as is oft-repeated, the ocean is made up of tiny drops of water.

If anyone has other recommendations for cutting down on unnecessary plastic, feel free to leave a comment.
Posted by Sue at 16:04

I hate all these plastic bags supermarkets use and since I'm not the one doing the shopping I end up with a huge amount of them almost every day! I can't wait for a ban of their use. I think the charge won't stop people from using them as before. It feels like the local supermarket would put everything in a separate bag if it could. Unfortunately I can't give any good advice on reducing their use.