After the frustrations of our first couple of days of family holiday, we settled down to a - mostly - relaxing break together. It's the first time all seven of us have been together for about a year, so it's been wonderful spending lots of time with our grandchildren.

Today we check out and return to the area close to Panama City. Tim is going to spend a week on the Logos Hope; Richard and I will stay in a much smaller guesthouse nearby for a few days, then begin our journey home (including a brief stay in Costa Rica).

To get the negatives out of the day first: Tim's luggage still hasn't appeared, which has meant he's had to spend at least half an hour each day on the phone to American Airlines, and at least a couple of hours trying to find suitable clothes (which should eventually be refunded by his insurance). Esther hasn't been sleeping well, meaning that Daniel and Becky have had very broken nights, and in the past couple of days Daniel has had a bad sinus-ish cold.

However, overall it's been an excellent break. When looking for a suitable place to say, Richard had several criteria: he wanted it to be in a safe place, child-friendly with at least four bedrooms. he hoped for some outdoor space for the children to run around, and - if possible - a beach nearby. He found all those things in our Air BnB villa in Coronado Playa. 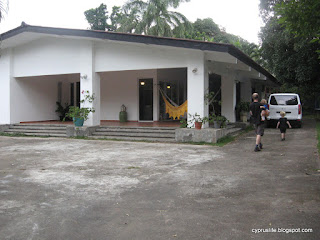 The whole village is in a closed area; to get in, we have to stop at a booth and explain where we're going. It's not particularly secure - usually Richard just says we're going to a friend's house, which he was told to say - but is protection against some danger. Not that it's a particularly dangerous country, but petty theft is fairly common, and this is quite a wealthy area. The owner of this villa lives in one of the cities, and this is her family holiday home. This appears to be the case for many of the owners of properties in the neighbourhood; they're mostly empty at present, although the weekend saw quite an increase in people locally.

The villa itself has a high fence around, with padlocked gates at the front. There's a caretaker who lives in a little house on site, and three large (though extremely friendly) dogs which live outside and bark at any hint of activity nearby during the night. 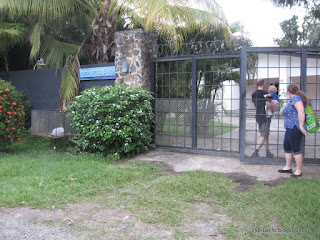 For me, one of the best things about a holiday is not having to cook or even think too much about food. Becky and Tim both enjoy cooking and planning meals, but we had decided to eat out a few times anyway, to save time and to experience some of the local cuisine. Not that we managed the latter. While there are some inexpensive 'fonda' restaurants (roughly what we would call tavernas in Cyprus) they're not child-friendly, and mostly only have outside eating areas near the street. Many only offer breakfast and lunch.

We've eaten twice at the closest child-friendly restaurant, an Italian one. 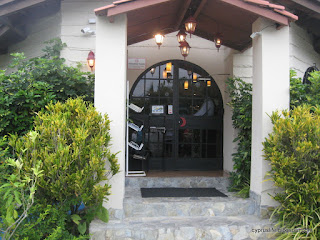 There are plenty of vegetarian options, although rather limited in dairy-free items at first glance. But they were happy to make a cheese-free pizza for Tim and were excellent with the children. There was a high chair for Esther, pictures and crayons offered almost immediately to both, and their food was ready before ours.

One lunch-time, after finding a department store that sold clothes suitable for Tim, we decided to have lunch at what looked like a fast-food non-chain place. There wasn't much that was dairy-free, but I had an excellent vegetarian lasagne, and once again there were pizzas, though not as high quality as at the Italian restaurant. 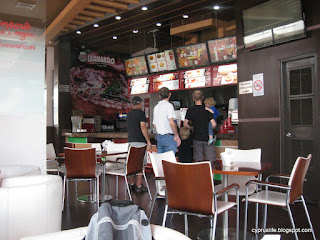 Mostly we've eaten at the villa: Becky organised fajitas for the first evening that Tim was with us, after picking up ingredients at a large supermarket in the afternoon. One evening Tim made some curries, which we ate with Arabic bread (available here, though naan doesn't seem to be). One evening we had a barbecue: 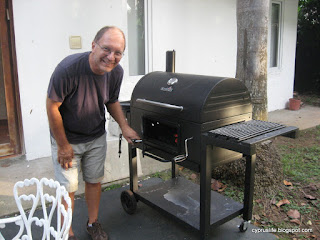 We ate outside, and asked the caretaker to join us. But there were a lot of mosquitoes around, and this rather high-class barbecue didn't produce any smoke to drive them away. So the rest of the time we ate indoors.  We had cold lunches - or evening meals, when we ate out at lunch-time - with bread and cheese and eggs and salad, and whatever random bits were left from other meals.

Yesterday we ate out again, this time at a Tex-Mex place called CBC which seems to be an international chain. 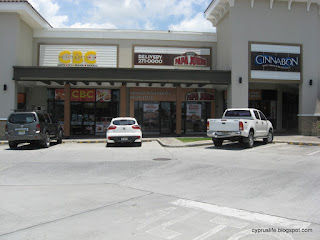 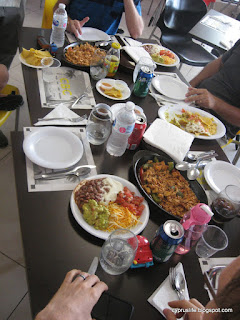 Becky managed very well communicating in Spanish as we tried to make our order, but when it was done, hoping it was correct, a friendly American guy (apparently the owner) appeared and ensured everything was correct, as well as chatting to us all and being extremely helpful.

So much for meals... though I mustn't forget the excellent ice creams, to which Tim treated us all on a couple of afternoons. The closest place, not far from the CBC restaurant, was called 'gelarto'. We found the spelling rather odd, as if it were a nod to British pronounciation. But hardly a problem. 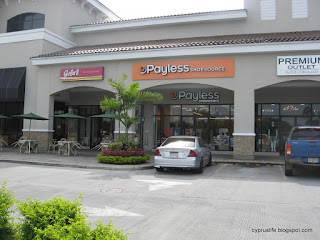 There were many choices, including some sorbets which Richard and Tim could eat. I tried a Belgian chocolate cone the first time, and it was so good I had the same the second time.

David did very well with his cones (chocolate brownie the first time, mint choc chip the second) but Esther, who tends to eat quite slowly, had to have some help. Here's a standard toddler-eating-ice-cream photo... 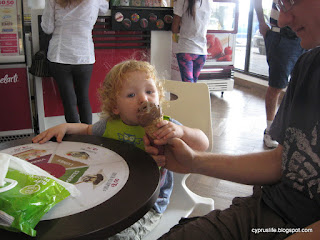 There was the added bonus of a shoe shop next door, where I was able to find some very comfortable flip-flops for indoor wear, and also some soft, light walking shoes. Esther, who likes shoes very much, thought it a wonderful shop.

Shopping inevitably took up more time than we had hoped, as we had to try and explore various supermarkets to find such essentials as bread, fruit, toilet paper and so on. We had to buy containers of drinking water too, as the tap water isn't good for drinking (though fine for brushing teeth and washing fruit). And Tim had to find suitable shirts and underwear, as his luggage continues to be missing.

The beach is about 500 metres from where we are staying, an easy walk down a country-type lane and a short alleyway. The sand is black in places, something new to us, and rather messy when walking on it! We've been a couple of times when the tide was quite high, and yesterday Richard and Tim took David to make a castle when the tide was much lower. There's no shade, so it's not a place to stay for more than a hour or so, and I haven't been other than in the early evening.

When we (or some of us) have been, one of the dogs usually accompanies us. 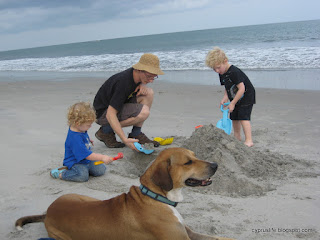 One late morning, when Daniel, Becky and Tim took the children to the beach, Esther's hat blew away and was swallowed in the sea; the waves were quite strong and there was no sign of it. On the off-chance that it appeared at high tide, we went for a walk the following day, and found some rocks to sit on a little way down the beach, while David hunted for shells. 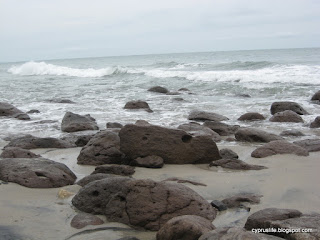 The hat didn't turn up, however.

We had thought about making some day trips a bit further afield, but none of us really wanted to spend an hour or more in the car, and then another hour or more back. The only real attraction locally other than the beach is a golf course, and as none of us play golf, we haven't explored that.

But it hasn't been a problem. The children have played outside for at least half an hour or so each day (other than one day when it rained). It's been hot and quite humid, so it hasn't been possible to spend as much time outdoors as we had hoped. But David and Esther have had fun in the tree house, or on the trampoline, or running around with the dogs. Esther was very nervous of the dogs at first; as Daniel commented, she's seen more crocodiles than dogs in the past year. But now she's much happier around them. 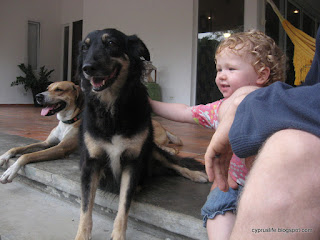 We've read lots of stories to them; Esther immediately accepted Tim as one of the family, and David loves the way he reads, so he's been a popular choice: 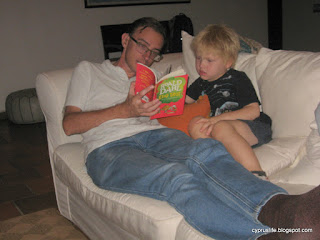 and we've played some games with David.... 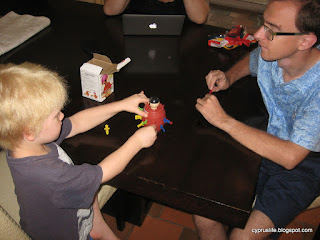 He has reached the age where he likes simple board games, and is also beginning to be able to play games intended for slightly older children, such as Uno.

Becky brought a selection of toy cars/trains, and building blocks, and activity books and it's been great just to hang out and enjoy spending time together, rather than rushing around doing things or seeing places of interest (which probably wouldn't interest the children).

Both children are usually in bed and asleep by around 7.30pm, sometimes earlier. So we(or some of us) have played board games every evening. Becky brought Above and Below (confusingly in a Settlers expansion box), Ticket to Ride (even more confusingly, in a Carcasonne box) [with the game boards separately], and, most importantly, Settlers of Catan. We've played that four times in all; it's still our default favourite game, one we never really tire of.

Last night, our final night in the villa, all five of us played. 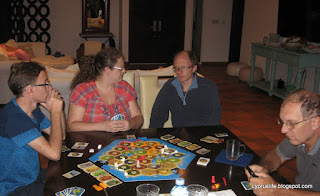 Daniel won in the end but it was a high-scoring game where any of us could have won. Almost all the cities were built and we used up just about every building spot.

This morning we're tidying up and packing in preparation for leaving about noon. As we have no idea what wi-fi access we'll get in the next week, I've hurried to finish this so I can post it before we leave.

Lovely blog; a bit too much on food, but lovely photos. Loved that one of Esther with dog especially. Such a pity the Airlines have been so inefficient with Tim's luggage.