Out of Cyprus Summer 2018: A couple of frustrating days

The family break was due to begin on Sunday 5th August.  Our few days in Panama after going through the Canal followed much the same pattern as the previous days. We had hoped to get the bus into Panama City one afternoon, only to learn that the buses weren't running to schedule. As there were various commitments on board, we couldn't sit around for up to an hour each direction waiting.

The initial plan for the Sunday was that Richard, Daniel and David would get a taxi from the Logos Hope to the international airport at 8.30am, arriving around 9.15-9.30, depending on traffic. Richard had booked a ten-seater car via Avis, the company we almost always use for car rentals as they are usually good value (when insurance etc is taken into account) and reliable. He has 'Avis preferred' status which, at least in the UK, means very quick service and we often get upgraded.

They hoped to get the car by around 10.00, and be back on the ship by 11.00. We thought it might take half an hour or so to load our luggage, as the car park is a five-minute walk from the ship, and then planned to have lunch on the ship around 11.45, and set off for our holiday AirBnB villa by around 12.30.  It's in a tourist town called Coronado, about an hour's drive from the Logos Hope. We thought Esther would sleep in the car, and that we would arrive by around 1.30.

Our other son Tim was due to arrive at Panama Airport at 8.30pm although we knew his connections at Tampa and Miami (in the US) were quite tight so were prepared for a call telling us he was delayed. Assuming he was on time, Richard would need to leave the holiday villa by about 6.30pm to allow for traffic, and I planned to go with him although we didn't expect to be back at the villa until at least 11.00pm. It was going to be a lot of driving for one day, but we then expected to have six days to relax together as a family.

So much for the best-laid plans.

On Saturday evening the four of us were sitting in Daniel and Becky's cabin after the children were asleep, and someone suddenly remembered that our passports were still at the purser's office. So Becky went to see if it was still open, and was told that we would not be able to get them until 1.00pm on Sunday.  Not necessarily a problem, as we could delay our departure by half an hour, so long as Richard didn't need to have his passport in order to rent the car.  We checked the paperwork and it didn't mention needing a passport, so we hoped for the best.

The taxi arrived at the right time, and Richard, Daniel and David were ready to go. Becky, Esther and I had a more leisurely breakfast, then I finished our packing and she sorted out some toys and a few other things to take on our break. We did have a moment's anxiety when a friend commented that passports are often needed in order to buy things in Panama. She said that they want to be sure that we're there legally, and have to see the visa stamp.

At 10.00am Becky had a message from Richard on her phone. He had been told that he absolutely needed his passport, and, worse, that there was no 10-seater car available.

Becky said she would go and see a friend who worked in the purser's office, and see if she could beg them to find our passports earlier than one o'clock. We asked Richard if we could simply send a photo of the visa to his phone, and he responded that they didn't need the visa, just the passport. I reminded him that he had a copy of it on his phone... so he showed that and thankfully they accepted it.

However this didn't solve the problem of the lack of an available ten-seater car.  Richard had to be quite assertive, as they didn't offer solutions easily - he was not impressed. Eventually they said there was a seven-seater car at one of their other local Avis centres. But although we're only seven people, there's almost no room for luggage in these smaller cars.

So they came to an agreement: they would drive Richard, Daniel and David to the other centre and let them have the seven-seater for the day.  In the evening, when Richard had to return to the airport to collect Tim, they would have the ten-seater available. So it wouldn't be too much of a problem to call into the Logos Hope to collect extra luggage that we could not fit in the seven-seater. Except that either Daniel or Becky would have to go with him, to get access.

It was after noon when they returned with the seven-seater car, but Becky had managed to acquire all our passports from her helpful friend.  We ate lunch on the ship, then finally departed, with about half of our luggage, around 1.20pm. 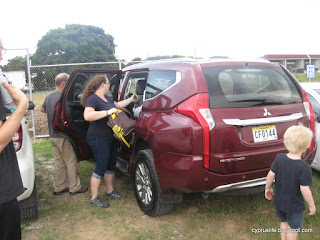 Esther, in a borrowed car seat, fell asleep pretty quickly.  The drive was longer than an hour; but Richard took it carefully, and there wasn't too much traffic. It was about 2.45 when we finally arrived at our Air BnB villa, booked for a week. We were greeted by John, the friendly caretaker, who doesn't speak a word of English. This looked like being a further frustration as he showed us around the place, and explained various things. Becky's Spanish is good enough for basic conversations, but doesn't really extend to explanations about padlocks and other safety features.

However, due to modern technology they were able to use translation tools on their phones.  John spoke Spanish into his phone, and it came up in English. Richard spoke English and it turne it into Spanish. Not quite a babel-fish, but not far off!

David knew there was a tree-house in the garden of our villa, but thought a tree-house was something like the hole that Owl lives in, in the Hundred Acre Wood, in the Winnie-the-Pooh books. He was thrilled with the reality: 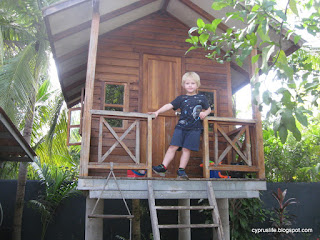 The villa is a large bungalow. There's a huge living room/dining room/kitchen which runs the full length, and four comfortable bedrooms. Three have double beds, and one has three sets of bunk-beds and is clearly intended for children.  All were made up for us. There are four bathrooms including two ensuites, with lots of towels, and there's a securely fenced garden. John lives in a little house in the corner of the garden, and there are three large, extremely friendly outdoor dogs.

However we quickly realised that we had to go shopping, not just for food for the following day, but for basics such as washing-up liquid.

Meanwhile Richard was messaging to and from Tim concerning the next major frustration of the day. Tim's transatlantic flight was delayed by 45 minutes, but the passengers had been told that since over forty of them were due to take the Tampa-Miami flight, the plane would wait for them. They had to collect their luggage, despite it being booked to go through, as this was their first entry to the US. Tim had an Estia, and had filled in lots of information on the plane, but he got asked many more questions and had to fill in more paperwork... and time was running out.

He located his suitcase on the carousel at Tampa, and his instinct was to keep hold of it as he didn't think he was going to make it onto the flight despite the reassurances. But an official told him to load it onto the carousel, so he did.

Then he didn't get on the flight after all. Nor did several other passengers from the same flight. As far as he can tell, US citizens got on the Tampa-Miami flight, foreigners did not.

American Airlines were quite helpful at this point, booking them on the next available flight (early the following morning), and providing food and a hotel. But whereas the other passengers' luggage re-appeared, Tim's didn't.  He spent about five hours in the airport, very hungry and tired, hoping his suitcase would emerge - and was eventually told it had gone on the flight to Miami.

He was not pleased.

Meanwhile, Richard managed (eventually) to contact Avis at Panama Airport, although it took a long time to get through to them - a minor frustration, in the scheme of things.  He really didn't want to drive all the way to the airport to collect the ten-seater that evening if he then had to go back again the following day. But there was a helpful person at Avis who said that the car was there, and it was fine for him to collect it at lunch-time the following day. 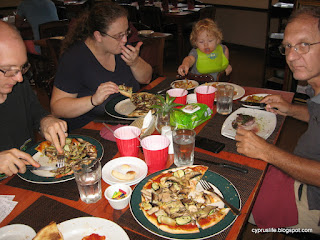 There was a small supermarket over the street, so we went there afterwards and picked up a few groceries.

Esther was a bit unsettled - she doesn't seem to like change, very much, and didn't sleep at all well, and we had some trouble with the hot water, but those were just minor frustrations the following morning.

Since there was still luggage to be collected from the Logos Hope, Becky volunteered to go with Richard on the drive to the airport, leaving about 9.30am. Tim, we gathered from further messages during the morning, arrived safely in Miama after an early flight, but there was no sign of his luggage. So he hoped it had been sent on to Panama. His final flight was about half an hour late, du to arrive at 1.00pm.

I stayed with Daniel and the children and we had a mostly relaxing day. David and Esther played outside and dug in the dirt... 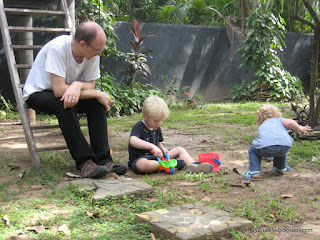 It was hot, and a bit humid but nowhere near as bad as Cyprus is currently.  We got rather bitten, presumably by mosquitoes or similar, and they were itchy... another minor frustration. But we found some white vinegar in the fridge and that's pretty good as an insect bite soother.

Shortly after lunch Daniel's phone received an update from Richard, and also from Tim.  The first good news was that Tim had finally arrived at Panama Airport.  The second piece of good news was that Richard had collected the ten-seater van.

But the final frustration was that Tim's luggage had not arrived. He spoke to a helpful official at the airport, who said that, according to the system, his suitcase had never left Tampa.  They asked him to phone the following morning, and said that they would phone John the caretaker to get directions for delivering it. Which sounded hopeful...

However, to jump ahead three days, for a moment, the luggage still hasn't arrived. Tim has had to buy some new clothes, the cost of which will be covered by his travel insurance, but it's still annoying and time-consuming.  But about half of his suitcase contained presents for the family - over a kilogram of Marmite, some chocolate, some rooibos tea ('robot tea', as David calls it), some late birthday presents for David, an even later Christmas present for Daniel, and a power adapter they need. It also had some books Richard had ordered for people on the ship.

So we're still hoping and praying it might be found... Tim is in daily conversation with American Airlines, but apparently they won't do anything further if it's not found within five days. They don't even seem to think it's all that unusual.  This seems quite shocking to us, used as we are to European standards (or the even more efficient Asian airlines).

However, it's great to be together as a family again, despite this ongoing frustration, and Esther having a hard time sleeping.  I hope to write another post in the next few days with some of the highlights of this holiday.
Posted by Sue at 21:56