The last post I wrote, at the start of March, was about the very wet winter we've had in Cyprus. The rain continued, off and on, through the month, and most of April too. The weather only startied to warm up towards the end of the month.

Time has passed by rapidly, and I haven't written anything on this blog for too long....


We had quite a few visitors in our guest flat during March and April. They included long-standing friends, a former colleague with his family, and some folk we know less well, with some of their relatives. It's good to have the separate apartment: we can spend a good amount of time with close friends or family members. But for those who want space for themselves, or whom we don't know well, can do their own thing entirely separately.

At the end of April Richard was able to take a bit of time off to spend with some friends we've known for a long time who came to stay for a week. They mostly wanted to walk in Larnaka, or play board games with us, or just hang out and chat. But one day we went for a drive and explored a couple of beaches.

Because we live here, we're not very adventurous about where we go. I have been to very few beaches other than those locally.  Richard suggested we drive to Fig Tree Bay, somewhere I had heard of, and which is a popular tourist resort a little beyond Ayia Napa. It took about an hour to get there in the car; it did indeed look quite touristy when we arrived. 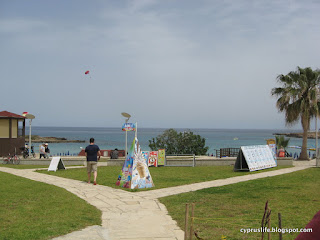 Apparently it's usually very crowded in the summer, but although the day was sunny it wasn't particularly warm. Well... not to those of us acclimatised to Cyprus weather. Our friends were wearing tee-shirts and shorts, and there were hardy folk sunbathing in swimsuits or bikinis. But we were still in our not-quite-winter clothes: 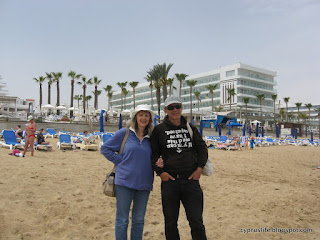 We strolled a kilometre or so along the beach, and found a little cafe for lunch.  By then the sun was quite strong, so after eating I waited in the shade while Richard and our friends walked a bit further, and then when they came back we had our first frappés of the season. 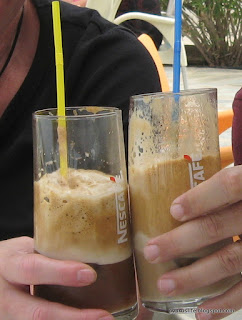 Other visiting friends had spoken enthusiastically about Agia Thekla beach, so we decided to visit that on our way back to Larnaka. It's another one I had never been to, and was quite a contrast to Fig Tree Bay.  The part which Richard was familiar with was mostly unspoilt, and entirely empty: 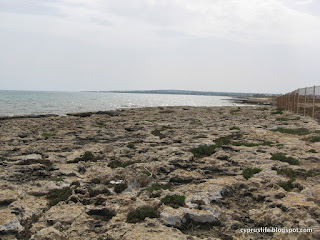 There were no sun-beds or umbrellas, no cafes, no toilet blocks. We did see a taverna nearby but it was closed.

In the distance we saw a huge hotel, under construction, no doubt intended to attract tourists. But hopefully they'll leave part of this beach alone, for those who prefer a more natural environment.
Posted by Sue at 18:08