An Extremely Wet Winter in Cyprus

At the end of October, I wrote about the first real rain of the season in Larnaka. It's always an occasion to mark in a country where drought is fairly frequent, and where there's virtually no rain for at least five months of the year.

In the winter of 2017-18, there were very few rainy days. The weather was mostly mild, and the nights not too chilly at all. We only used our extra-thick (13 tog) duvet for a few weeks, and I didn't get out my wheat bag at all.

The past few months have been a tremendous contrast. In November, it rained regularly. It was mostly at night, with sunshine in the daytime, which seemed like quite a good arrangement.  By December 1st, the Salt Lake was looking decidedly fuller, and the flamingoes were clearly in evidence. 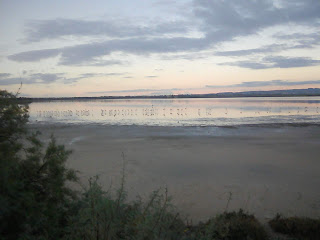 December was even wetter, and it started raining in the daytime too. By January we had become used to regular rain. By mid-February, the island was looking greener than I could ever recall it being - and we've lived here for more than 21 years now.

It has been colder, too. We have used our double thickness duvet for nearly two months now, and heat up our wheat bag every night. Some early mornings it's been 8-10 degrees Celsius.  A couple of days ago it was only 5 degrees.

The water in the Salt Lake was higher than it had been for years: 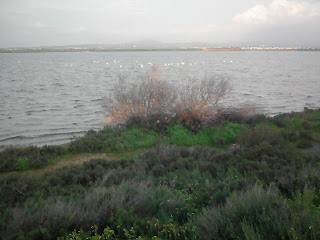 Here's some of the greenery we saw at the side of the trail, mid-February: 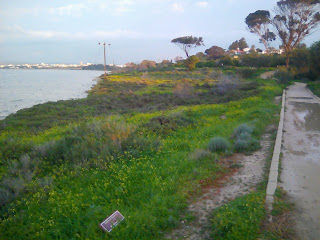 A couple of days later - on another cloudy morning - I looked over a different part of the park; it was so green that it didn't look like Cyprus at all: 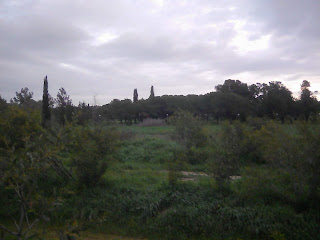 This morning we walked to the Airport Road end of the trail again - we've done so more often recently - and there was very little 'beach'.  The water was higher than I can recall it ever being before. 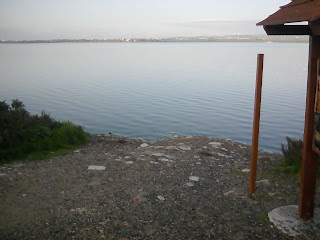 Today I saw an article saying that the past five months have been the second wettest period since 1901 (when, I assume, they started keeping records). 620mm (62cm, or just over two feet) doesn't sound like a whole lot, but is apparently 165% of the average annual rainfall for Cyprus.

I looked up the UK annual rainfall for the sake of comparison. The UK is typically considered a very wet country. Apparently Birmingham, where we used to live, has only 680mm rain per year.  London has just 592mm.  Cyprus in the past five months has been significantly wetter.

Last Summer the Water Board sent out dire warnings about restricted use of hose pipes, and on-the-spot fines for people seen washing their cars or patios using hoses. Of course people continued doing these things, mostly early in the morning or late at night, or on Sundays, when the police would not be around to report or fine them.  And we were still encouraged to use hoses on plants.

Now the reservoirs are fuller than they have been for a long time, with some of the dams overflowing.

I don't think there will be a hose pipe restriction in Cyprus this year!