I have always liked photographs. As long back as I can remember, anyway. I was given my first camera when I was seven. I took photos on holidays with my little Instamatic. At some point I was given my grandfather's old 35mm camera.

In my teens, I took photos at school; I embarrassed friends by taking photos at parties. I was absolutely thrilled with the gift of a negative album and half a dozen photo albums when I was about fourteen. I organised and annotated some of my pictures; I stored my negatives carefully, with dates, names and places.

I suppose it's because I'm not at all a visual person that I like looking at photos. I can't picture anything clearly in my head, with my eyes closed. So I rely on photos to remind me of scenes in the past, and people I have known. My parents had a darkroom in the house I grew up in, and I loved seeing the pictures emerging after developing the films, and then processing the images.

In the early 1980s, colour films dropped in price, and it was possible to send films to be processed, at a cost that was rather less than that of buying new chemicals for the darkroom. I was newly married, at university and then out at work, with a house that needed a lot of repair work and redecoration. So I appreciated the saving in time, too. I was much less disciplined about organising negatives - they came in nice little sleeves anyway - but I bought new slip-in albums and kept more-or-less up-to-date with the photos.

In 2005, we moved from analogue film to digital photos. But I still ordered prints. It was more economical and far more efficient - I could take as many photos as I wanted, choose the best ones, and order just those.  I didn't get them locally; I uploaded them to one of the online photo processing places; originally Kodak Gallery (which closed some years ago), and then the excellent Photobox site.

The number of albums kept growing. It was proving more difficult to find suitable new albums, however.  And I was running out of space: 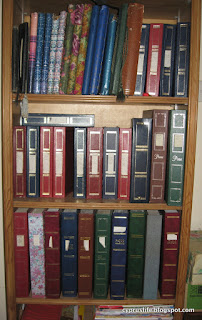 Back in 2010, I had managed to make a digital 'photobook' at Kodak Gallery online. It was our thirtieth wedding anniversary, and I wanted to make a memento. I scanned some of my favourite photos over the years, which I uploaded, then the site took me through the steps of creating a hardback book.  There were several different formats offered for each page - I could place just a single picture, or four, or nine... I experimented with the options, and we were very pleased with the eventual result: 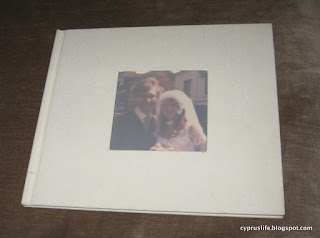 I had wondered, more than once, about making more photobooks.  The Photobox site offered them, but they seemed extremely expensive.  However, they regularly sent me emails of special offers:  50% off everything on the site;  60% off photobooks;  extra pages free with photobooks; - I never knew what was coming next, but tried to take advantage of special offers with the prints I was ordering.

Early in 2016 I calculated the cost of making a regular photo album with prints ordered from Photobox.  I had discovered somewhere in Cyprus that sold photo albums holding 300 prints, which would - just about - take about a year's worth of pictures.  The album cost about €20.  300 photos at about ten pence each cost around £30.  Total: not far off £50.  The special offer reduced-price Photobooks, with up to 100 pages, cost about £40.  I could put in more photos - each page can take at least six photos - and I knew they would take up much less space than regular albums.

I decided to try it with our 2016 photographs. I finished my last analogue album, ensuring it ended at the end of 2015. And over the year, I sorted and uploaded to Photobox one month's photos at a time, then very much enjoyed playing around with the online system to create the photobook. I realised I didn't just need to use the pre-defined templates. I could add extra photos, place extra text, and change the size or shape of the pictures.  There were different backgrounds available, and also some extra illustrations I could add.

Many of my online friends were creating 'bullet journals' at the time; hand-crafted beautiful books containing memorabilia of their day-to-day lives, along with photos and hand-written text.  I am so un-artistic that I could not do that kind of thing; but making an online album fulfilled a similar function.  Early in 2017 I ordered my 2016 album, and was very pleased with it.  There were, inevitably, lots of pictures of my grandson: 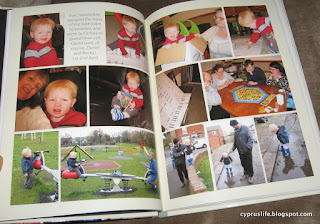 I liked being able to include several similar images.  And at times I placed far more than six on one page: 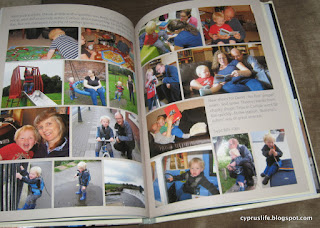 Inevitably there were a few typos in the text, and I had not been consistent with the font size or colour. But I was so pleased with it that I've kept making the current photos into photobooks: 2017 and 2018 are complete, and 2019 is in process; I'm up to the end of June so far.

Having established that photobooks are good value, great quality, and - best of all - replaceable, should any disaster strike the ones we have - I started thinking about making them with older photos.  My first album, from the 1960s, has photos falling out; we don't have an album at all from Richard's childhood.  But I had some scanned copies of negatives of photos from both sides of our family, and decided to start with the year Richard was born.

I quickly realised that I didn't have all the available photos. So this project was going to have to pause until I could get hold of them to copy.

Meanwhile, our 1980 professional wedding album was looking considerably the worse for wear: 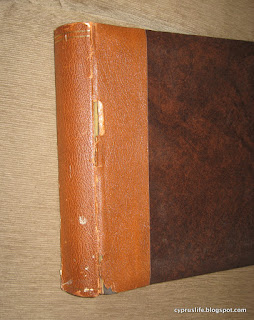 The photos inside fall out if we're not careful, and some of them are starting to fade.  We only selected about eight of them, but there were about fifty or sixty taken by the photographer, and more by my father and my father-in-law.  We had photographed the 'proof' album with all the professional photos (which my parents-in-law had bought), and I had scanned my father's negatives, and also some slides we had taken on our honeymoon.

So I decided to skip forward to 1980.  I first made us a new wedding/honeymoon album: 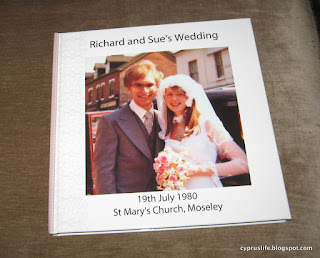 I even scanned copies of the wedding service booklet and hymn sheet to include: 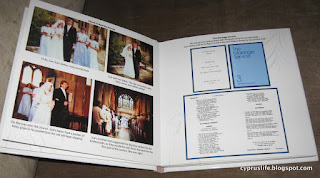 And then I made the decision to create photobooks of ALL our photos - the analogue albums only ever contained a selection of the better ones, and some of them are very faded now.

So I got going on chronological albums, making one that covered the years from 1980-1983, and one that covered 1984-1985.  I've been reminded about my grandparents' golden wedding, my grandfather's 80th birthday, and some holidays we had in the Middle East, where my parents were living.

I was particularly looking forward to the next few, as they include our sons as babies.  I ordered 1986-1987 about a month ago: 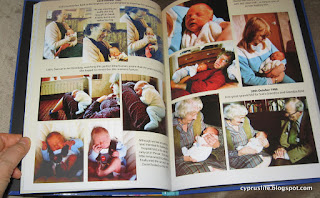 Daniel had four grandparents and five great-grandparents still living when he was born, so I have loved seeing photos of them together.  I've also included pictures of Richard's work at the time - photos which never made it into our former albums.

I've been working on the next two albums as well, and they're just about ready to order; I'm hoping for a good special offer in the next few weeks.  There's no hurry - once created, they stay in my Photobox 'creations' collection, along with the ones I have ordered.

The bookcase in the photo above is about 60cm wide.  The middle shelf contains twelve books, which just about fit, covering something like 18 years of our married life.  The lower shelf contains ten slightly bigger books, covering ten years of our life.  Digital photography leads to more photos being taken, and as I get older I like more photos anyway. Particularly of our grandchildren.

By contrast, here are our first eight photobooks. The two on the left are the special anniversary and wedding ones. The remaining six, covering ten years (1980-1987 and 2016-2018) take up just eight centimetres of shelf space: 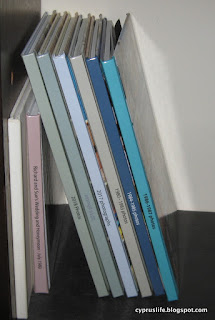 It's said that one knows how good a company is by the way they deal with things that go wrong. I had to test that out a couple of months ago, when I ordered two photobooks at the same time. When the parcel arrived, it contained one of the ones I had ordered, and one that was nothing to do with me - on the front was a photo of someone I did not recognise, and some text in one of the Scandinavian languages.

I clicked 'help' on the Photobox site, and was greeted by an online 'chat' box. I explained the problem to an extremely helpful assistant, who apologised profusely and said that just occasionally something goes wrong with the printing, and an order gets missed out. She ordered a replacement album to be sent to me, and asked me to return the one that wasn't mine, and to send them a copy of the postage receipt. I did so, and the amount was refunded to my Photobox account within a day.  I was very impressed with how quickly it was handled.

I would highly recommend Photobox to anyone interested in trying this kind of thing. If you do, make sure to get on their mailing list so they send you regular special offers.
Posted by Sue at 21:31