As Facebook keeps reminding me, there are several years where I have spent most of August in the UK, and returned to Cyprus early in September.  August remains my least favourite month in Cyprus: the heat and humidity are excessive, and many activities and businesses close down for two weeks or longer.

Not that local activities are particularly relevant now our children are grown up, living and working in the UK. But it does mean that a lot of people tend to travel during August. So it happened again this year: I was away for nearly five weeks, in cooler climes which I like so much better at this time of year. More significantly I spent some quality time with the family.

I flew back to Cyprus on September 3rd.  It hasn't been too humid since my return, and it hasn't been excessively hot. Daytime highs (in the shade) have been around 30-33C, and the nighttimes down to a much more pleasant 22-24C.  We're still using air conditioning when computers are on, and for a couple of hours in the bedroom at night to reduce humidity. I'm not walking anywhere between about 9.00am and 8.00pm. I'm not liking the fact that it's still hot for me, but I have to acknowledge that it's vastly preferable to August.

Last week I agreed to start walking early in the morning with my friend Sheila, again.  We stopped mid-June when it started feeling unpleasantly warm, but usually resume some time in September. I remembered to take my camera for the first walk.  The ground cover was mostly brown, after over three months without rain: 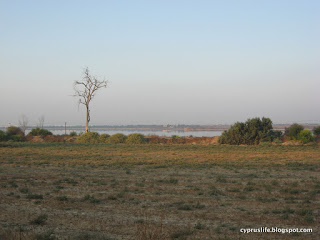 But, as can probably be seen in the thin strip of blue in the middle of the photo, there is still quite a bit of water in the Salt Lake.  Some years it has dried up completely; some years there's just a little water by the end of Summer.  But this year - where we had a lot of rain in the winter and spring, far more than normal - it has as much water now as it sometimes has by the end of the winter.

Here's a cropped picture which shows more clearly how much water there is: 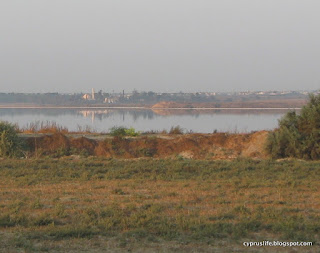 There even seem to be some flamingoes, although they were so far away that none of my photos show them.

We walked to the Airport Road end of the trail.  Three months ago the water was almost up to the trail, so it's gone down a fair bit:  there's dried salt on the sand, although it probably isn't obvious from the photo: 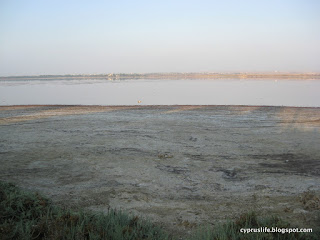 I kept looking at the forecast, hoping it might cool down a degree or two. But the long-range forecast continued to show 31-32 degrees in the daytime, 21-23 overnight.

So it was a bit of a surprise to see a lot of cloud in the sky yesterday morning, and by about noon the clouds were grey and quite threatening. It was extremely humid, too; I turned on the air conditioning in the kitchen where I was cooking our Sunday lunch as I felt so sticky; the air was heavy, and I wondered if there would be thunder over the mountains.

It was even more of a surprise when it started to rain. It slowed down after about half a minute, which is normal for the first rain of the season.  It usually brings lots of dust from the trees and rooftops, and makes the atmosphere even more humid.

But then the rain started up again. It must have rained solidly - quite heavily at times - for almost an hour.  There was some hail, and the kind of torrential rain which is very unusual this early in the season: 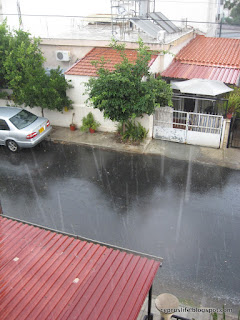 Our roof leaked over the stairs, as it does in heavy rain; local friends reported, on Facebook, that their roofs leaked too. And there was apparently some flooding in parts of Larnaka.

By about 3.00pm the rain had stopped, and the sun came out later.  The evening was a little cooler, but today the temperature is back to 31C.  The forecast doesn't show any significant reduction of temperatures for the next ten days - but then the forecast didn't predict over an hour of rain yesterday.
Posted by Sue at 17:42