We went to church in the morning. I had a feeling it might be the last time for a while.  St Helena's is small enough that it was able to hold a service. Perhaps thirty people were there. We had to use hand sanitiser before being given our service sheet and hymn book, but people were sitting together.  No physical contact, we were told, during the 'peace'.  No wine for communion, just wafers. And the servers would use extra sanitiser before distribution.

People were mostly fairly relaxed, none of them seeming too worried about the pandemic. Cyprus has 26 cases so far;  quite high in per-head terms (the population is about 1.2 million) but most are external, caught at the airport. But none, as far as we know, in Larnaka.  So far, anyway. Even so, the streets were quieter than usual, and the Municipal playground eerily quiet. Usually it's packed with lively, fast-moving children on a Sunday morning.

In the late afternoon the President gave a speech.  It's going to be far more difficult for anyone to get into Cyprus, as they will have to produce health certificates, and go into compulsory 14-day quarantine, at a government location. Only Cypriots, legal residents and essential businesspeople will be allowed in.  This will continue until at least April 30th.

All department stores, restaurants, cinemas etc must close tomorrow at 6pm, for at least two weeks, maybe longer.  Churches are encouraged to close their doors until at least April 10th. People are recommended to self-isolate, although going for walks or driving is still permitted, unlike in some parts of mainland Europe.

A lot of people in Cyprus (and the UK) have been asking about home education, either short-term or longer-term, so I decided to make the Kindle version of my book free for the next five days (Amazon won't allow any longer) and at the minimum possible price thereafter.

I got in touch with some friends who were due to stay in our guest flat for most of April, asking if they knew about the new regulations.  They had just been told that their flight was cancelled.  Perhaps they'll come later in the year; we've pencilled in some dates.

I sat at my computer for a lot of the afternoon, compulsively checking and re-checking news sites, and vegging out with Facebook.  As well as writing my previous blog post with a general update right before the start of the lock-down.

I went out to the froutaria and Achna Discount mini-market at 7.00am, wanting to make sure we had a little extra cat food, and one or two other items where we would soon be running low. I noted that there was plenty of toilet paper on the shelves in Achna Discount, although some of the other shelves looked a little less well-stocked than usual.  There aren't usually many people shopping at that time,  so there was no restriction on numbers.

Our van was due to have its clutch replaced so Richard drove it to the local garage at 8.30, only to be told that he should bring it back in two weeks' time.  The owner wasn't there.  It's not urgent; it's the van he uses when running PA for events, but there aren't going to be any events in the foreseeable future.

Richard works from home; he had some online meetings in the morning, and did some work as usual. I put links on Facebook and my home education website to encourage people to download the free edition of my book, and wrote some email. And checked the news sites compulsively...

I was sent an email from the St Helena's administrator, letting me know that the church would be closing Sunday services and all other events for the time being, in line with the Orthodox Church recommendations.  She asked me to update the church website, which I have been maintaining for many years.

I tried to keep life as normal as possible. I did some laundry, and pottered in the kitchen.  In the afternoon some friends who live in Limassol called in for coffee, after dropping a relative at the airport. It's probably one of the last flights out of Cyprus for a while.  They stayed until the flight had taken off, just in case there was a problem. It was nice to catch up with friends whom we hadn't seen for a while, but very odd not to greet them with hugs, and to sit on opposite sides of the room as we chatted.  Social distancing, it's called.

I don't usually go out much on a Monday but somehow we both felt slight cabin fever by the evening, so after we had eaten we went out for a walk, down to the sea-front.  It was quite shocking to see the place so quiet, with hardly anyone out and about.  Restaurants were not just closed, they had tables and chairs stacked away. 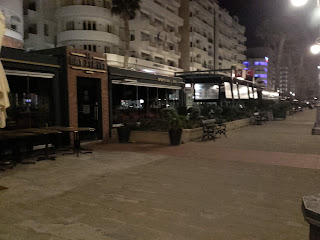 Back home, I checked the news sites again.  There are 46 cases of covid-19 in Cyprus now.

We usually watch a DVD on Monday nights, but neither of us really felt like doing anything so frivolous.  I started to feel as if we were stuck in a dystopian novel... not yet affected ourselves, but waiting for something to happen...

I woke up around 6am to very gentle rain, but decided to go out for my usual walk with my friend Sheila.  By the time we met, about half-way between our house and hers, it was raining a little more. We both had umbrellas, but didn't want to risk slipping on the Salt Lake trail.  So we walked down to the sea-front, and along.  The rain became heavier, so we headed back, then sat outside in our side garden, under the roof, and watched the rain pouring down...

Umbrellas, we realised as we were walking, are excellent tools for 'social distancing'. 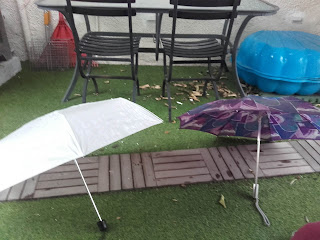 Around 8am the rain stopped, so Sheila walked home and I went in to squeeze oranges and prepare our breakfasts, then made some bread and some cashew milk. Normality as far as possible.  At 10.30 or so Sheila and her three daughters - aged 14, 11 and 9 - came over to hang out. We do so much with their family that we decided last week that there was no point distancing ourselves from them.  Unless, of course, one of us develops the virus.

The girls played with lego for a while, and we chatted, then we played a few games.  At first they couldn't agree on anything - perhaps they have been playing too many games at home in the past few days, with all outside activities cancelled.  But eventually we played some Boggle and Ligretto, two favourites that can be played by almost any number.

In the afternoon, I checked the news sites compulsively, and wrote some more emails.  I also checked to see whether my book was being downloaded in its free version, and was pleased to see that there were 49 downloads yesterday, and 11 (so far) today.  It even says it's number one in the free Kindle editions of books about parent participation in education.  I could, should I so desire, call it a 'best seller': 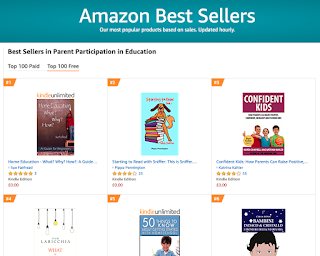 Mid-afternoon we walked to a meeting with two of the St Helena's ministers, to discuss communication with the congregation. In addition to the church website, and we had been thinking for a while about having a Facebook page. It seemed like a good time to start one.  So when we got home, I did so.

Three more cases of covid-19 in the Republic of Cyprus, taking the total to 49 now (plus about six or seven in the North).

I went out to the froutaria first thing, by a roundabout route that gave me a couple of kilometres of walking before I got there. We didn't need much, so I didn't take my trolley. It was quite chilly: only 7 degrees at 6.30am.  I wore my knitted hat for the first time in several weeks.

There was only one other customer in the shop at 6.30am, but one of the women at the tills told me that they have to limit the number of customers in the shop when it gets busy later in the day.  She was feeling concerned, wondering if the staff ought to be wearing masks, even though they're not recommended as protection against the virus.  But people go through the checkout lines all day, some of them coughing or sneezing.  There are still no confirmed cases of covid-19 in Larnaka, but that could change any day.

The government have announced that there will be no passenger flights at all permitted to land from March 21st (Saturday) for two weeks.  Cargo flights will still be arriving, and there may be empty planes arriving to remove any remaining tourists who need to return to their home countries.

And on an unrelated note: as it's been warmer recently (around 18-21 degrees in the daytime) our central heating has not come on at all for about three weeks.  Last night when the temperature dropped Richard went to see why it wasn't coming on, and it appears to be not working at all.  So today the house has felt quite chilly.

Since it should warm up again by the end of the week, and it's not VERY cold - around 15-16 degrees - we're probably not going to call in the repairman yet again.  We need a full service of our heating before next winter, so will try to remember to book it in about October, when - we hope - this pandemic will have ended, or at least have reduced, and workmen will be out and about again.

As well as checking news sites compulsively, I have updated my Cyprus-life site with a brief note about the current situation, and worked a little more on the St Helena's site and page.  The new reality is taking hold, but hasn't dramatically affected us yet.  Life goes on. Laundry and shopping and cooking still happen, and since we're both usually at home most of the time, things aren't so different for us. At least, not yet.

I was going to keep updating this until a week had passed, but this is long enough already.  So, just in case anyone reading this is interested in downloading my book about home education while it's still free for the Kindle, here's the link on the UK site: https://www.amazon.co.uk/Home-Education-What-Guide-Beginners-ebook/dp/B07N6NV822/  If your Kindle is linked to another country's site, you should be able to find it there using the same product code.