I originally called my last post a 'lockdown', but apparently that is incorrect terminology.  So I changed the title.  Some countries are observing 'lockdown' where nobody is allowed out of their houses at all, other than for essential errands.

It's not like that here in Cyprus. Not yet, anyway. We can still go out for walks, and - if we choose - see friends. Social distancing is expected, and the few remaining shops are required to be strict about numbers of customers and keeping them at least a metre away from each other. The supermarkets have started requiring customers to use hand sanitiser and gloves.

So far it hasn't made much difference to us, in practical terms. But there's an atmosphere of concern, just one topic of conversation.  It's hard to focus on anything else. Facebook is full of reminders that some people in the past had it much worse, during wars or occupations.  I wonder how long it will take for this to feel 'normal'.

Wednesday 18th March (continued)
In the evening, our friends came over for our weekly game of Cities and Knights. It was an auspicious occasion; Facebook had reminded me that morning that it was exactly ten years since we taught the game - as an expansion of Settlers of Catan - to Sheila.  It was a good game, rather longer than some, and Sheila won with rather an impressive 17 points: 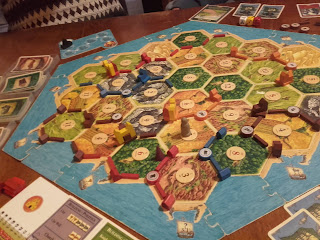 Another nine confirmed cases of covid-19 taking the numbers up to 58 in the Republic of Cyprus.

Thursday 19th March
I woke around 5.30am and got up despite the house feeling decidedly chilly. My phone told me it was only 8 degrees outside. But I decided not to take my woolly hat out with me; I knew that by the time I had walked a kilometre or so I would feel warm enough. I did wear gloves, though.

I walked to Sheila's house, and we then did our usual walk along part of the Salt Lake trail.  There were fewer people out than normal, but the roads were fairly busy.  I had done 10,000 steps by the time I got home, according to my phone, so that was a good start to the day.

However when I arrived back, I felt as if I were starting a cold.  A couple of sneezes, and some coughing. Normally I would barely notice, but of course every cough is a worry at present.  It wasn't even particularly productive, but was possibly triggered by the change in temperature.  I'm not coughing most of the time, just once or twice when I move to a different room in the house.  I'm not particularly concerned. I don't have a fever, as far as I know, and it's only an occasional cough.

We've been wondering if the general social distancing and extra hand-washing that's encouraged this year will lead to fewer cases of ordinary infections and seasonal flu.  I suppose that won't be obvious for a while; but somehow I've caught a cold, albeit a mild one, despite the extra care.

And it's cold.  After a sunny start to the day, it rained mid-morning. The house was down to 15C by lunch-time.  Since our central heating isn't working, Richard turned on our electric heater, and put our living room air conditioner on to heat.  It takes the chill off the house.

Richard spent an hour at St Helena's church building this morning, recording a short video by the Chaplain, explaining what's happening.  I spent much of the morning - and afternoon - updating things on the church website, and the Facebook page.  I did then write a book review - of a book I finished a few days ago - but it's so tempting to sit and scroll through Facebook, finding out how family and friends are doing; and, of course, checking the news sites compulsively for updates...

On the last three Thursdays I went out mid-morning to the St Helena's Lent discussion group, but prior to that my Thursdays were usually very quiet. I rarely left the house after my early morning walk.  So it shouldn't have been a hardship to stay in today.  But there's a difference between choosing to stay at home, and feeling compelled to do so.  I didn't particularly want to go anywhere, so it makes no sense.

In the evening we both felt very tired. Still, we had a short but encouraging Facetime call with family in the UK.

We also discovered that Cyprus now has 67 confirmed cases of covid-19, including three on one of the military bases, plus 33 in the North (30 of whom are German tourists).  100 cases is a lot for a small island with a population of around 1.2 million.  Only one is critically ill.  None in Larnaka, so far, and most of the new cases were in contact with other cases, or arrived from elsewhere and had been self-isolating.

Tomorrow is the last day that any passenger flights can arrive in Cyprus; after that, nobody - even Cypriots - can come here for two weeks, other than a couple of specially chartered flights to pick up residents who were stranded after a cruise.

Friday 20th March
Usually on Fridays we do some shopping or 'house admin' - at least, that's the theory.  We didn't need anything from a supermarket so I decided to walk to the froutaria via the Post Office where we have a PO Box.  That gave me a little over four kilometres' worth of exercise, and some fresh air. It was still quite chilly but the sun was shining.

I collected some mail from our PO Box (mostly books I had ordered about three weeks ago, for the local book club I have joined, which - of course - might not meet for the next few months.

Although there was less traffic on the roads than normal for the time of day (I left the house about 7am) there was still construction work happening, on various buildings, and this, near the Post Office; I believe it's going to be an indoor mall of some kind eventually: 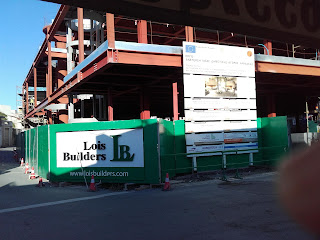 However, the town centre itself was almost deserted.  A lot of shops wouldn't be open at 7.30am anyway, but nothing at all seemed to be open today. 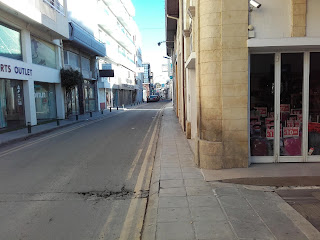 I saw very few people walking, until, almost at the municipal playground, I passed a man and - I assume - his son, who looked about seven or eight.  Unlike most other people I've passed in the streets in the last few days, they didn't move to the side of the pavement.  And just as I was about to go past, the boy started coughing.  Not into a tissue, or elbow, or even his hand, but into the air... and the man did nothing to try and stop him.

I'm assuming the  boy only had a cold, perhaps the one I've had for the last couple of days.  But even so, I was quite shocked that he was out on the streets with such a cough - which continued after I had passed - and that his father didn't quickly remind him to cough into his elbow, or a tissue.  I very much hope it was just a cold, since I had to keep walking along the street where they had been before I passed them!

I popped into the mini-market opposite the froutaria, and noted that there was still lots on the shelves, including toilet paper. I bought a couple of things, and then more at the fruitaria.  There weren't many other people there, but they had put red tape on the floor near the checkouts, a metre or so apart, and were telling people to queue behind the red lines. I dutifully did as I was told... and watched other shoppers ignore them completely.

Later in the day, I wrote a rather overdue DVD review, and worked somewhat on my home education website, and wrote some emails.  Then I cooked some vegetables and we walked to our friends' house for our usual Friday shared evening meal.  Perhaps that will be forbidden in days to come, but for the meantime we're continuing with this.

In the evening the government announced that the period from 6am-10am will be reserved for over-60s and the vulnerable in supermarkets and pharmacies. I'm not quite 60 and not vulnerable, but it's a minor inconvenience; I can shop at other times. I don't know if this apples to the fruitaria anyway.

We also learned that there are 8 more cases of Covid-19 in the Republic of Cyprus, taking the total to 75, and one extra in the North, making 34.

Saturday 21st March
Another sunny-but-chilly morning; another walk with Sheila. We saw even fewer people than on Thursday, but we did meet a couple of dog-walkers with large dogs. The dogs seemed extremely pleased to see us, unusually so. Perhaps social isolation is difficult for them too.

After we've walked, we usually sit on our side garden swing for a while, and at this time of year I often start to feel a bit chilly around 8.00am.  Today I felt, suddenly, very cold shortly before that time.  It didn't feel much warmer in the house, and despite moving around and organising breakfast, I continued to feel cold, almost shivery.  As Richard did a few days ago.  I put my fan heater on, and had a very enjoyable half hour or so video chatting with my grandchildren, who had woken early. And their parents, of course.

I usually clean the house and change the sheets on Saturdays, but I was feeling so cold that we turned on the living room air conditioner to 'heat', and I used my little fan heater too.  I did more online admin,  caught up with various things, didn't do anything particularly constructive.  Then suddenly, around 5.00pm I realised I was warm enough and felt fine. So I cleaned the bathrooms, changed the sheets and pillowcases and duvet cover, and did a few other bits of housework. Not as much as usual - I kept getting exhausted - but at least I did something.

Meanwhile, Richard has been preparing and checking equipment and software to enable a very short live-streamed service from St Helena's tomorrow morning.

Another nine cases of Covid-19 in Cyprus, taking the total for the Republic to 84.  It sounds from that report as if there are three in critical condition now, although the Worldometers site only shows one critical or serious.

So the first week ends.  Numbers are not increasing exponentially, but there have been another eight or nine confirmed cases each day.  We hope this will decrease with the strict measures being taken; whether that will happen remains to be seen.

We've been having much trhe same here in South Africa. On Sunday we had our church service at home with just the family present, but on Thursday we really will be going into lockdown, and our son will be staying home from work.