I can remember having an Advent calendar as a child. It was usually a cardboard affair, with a scene of the Nativity, or shepherds, perhaps, in bright colours, sometimes with glitter.  We opened one little window each day during December, with the final one being the 24th, usually - Christmas Eve - with a larger window, and a manger scene. It used to puzzle me why that didn't appear on the 25th until I realised that, of course, Christmas Day is no longer Advent.

I used to love my Advent calendar. Sometimes we had a family one, and took it in turns to open the little windows, but at least a couple of times I had one of my own. I knew what was coming, but I loved the anticipation, nevertheless: the reminders of the background to the Christmas story, leading up to the Nativity.

By the time my sons were small, Advent calendars had become more secular. We tried to get 'religious' themed ones, but it was quite difficult. Advent calendars were more likely to have jolly Santa figures, or Christmas trees - a countdown to Christmas, certainly, but really nothing to do with Advent.  At least once someone gave us one with chocolates inside, which seemed even more of a bad idea, giving extra sugar to children who were already excited about Christmas coming.

Nowadays, of course they have become almost entirely commercialised. It's possible to get Advent calendars with all kinds of gifts - with beauty products, or wine, or even cheese samples.  This, for instance, is a site that recommends the 'best' Advent calendars for 2020: I looked at the first few entries in the gallery, and the least expensive was over $30.

Advent is a Latin word for 'coming', and is used to indicate the arrival of an important person or thing. So I suppose it makes sense for those of a non-religious persuasion to think of it as waiting for the arrival of Santa Claus. Which is all very well for children, but those expensive Advent calendars with perfumes or wine are not intended for the young. I suppose they have become an excuse for yet more spending in the festive season - and this year, with so many shops struggling, it's perhaps a good way to make money at last.

Of course, most years Advent doesn't actually start on December 1st. And unlike Lent, Advent is not a fixed length of time.  There are four Sundays in Advent, so when Christmas is a Friday, as will happen this year, the fourth Sunday of Advent will be December 19th, and today - November 29th - is the first Sunday of Advent.

In the Anglican Church, which is in our background and where we're now established again, Advent is the start of the church year. We were wished 'Happy new year' this morning in the church service.  The cloths on the table - and the clergy stoles - had changed to purple, and there was an empty scene under the table, waiting for the Nativity scene. 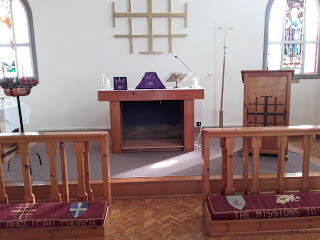 Naturally - it's traditional on the first Sunday of Advent one of the songs was 'O come, o come Emmanuel'. It's much loved by many, but I admit to finding it a bit dreary. On the other hand, I really like the more modern 'Christ be our Light', which was another of today's songs.
There was a new Advent service sheet too, and an Advent wreath, which just about shows on the left of the photo above, in the middle. It has four candles, and the first one was lit today.
All symbolic, of course, and not everybody appreciates symbolism of this kind. But I find it helpful, and I like the progression of the church calendar.  In Advent we think about the first coming of Jesus, the one that is celebrated in Nativity plays and Christmas carols, but we also think about the second coming  - the end times - something that feels all the more real towards the end of this extremely difficult year.
At home we don't currently have any purple candles, and I haven't seen any in the shops. I was thinking of buying a red one for Advent, but I couldn't find one I liked. Most candles in the shops currently are scented, and I really dislike candles with scents. They're not good for cats, either. But we had an unused white candle, so I put away the green one that's been on the table since we stopped using ceiling fans,  and started a new white one at lunch-time today: 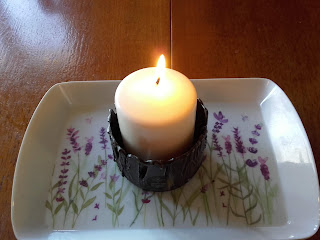 And as an aside, not relevant to Advent, today also happens to be a very important day in my family: my father's birthday. So my brother arranged a family Zoom call - the first time we've done this, though we plan to repeat it regularly - and it worked extremely well. 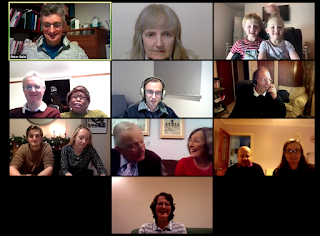