More Images of Autumn in Cyprus

Two weeks ago exactly I wrote a post with a few images I associate with Autumn in Cyprus.  Some fruit, a cat bed, a cloudy sunset, and a few fallen leaves in our side yard.

Since then the temperature has dropped somewhat; this morning I switched the thin duvet, which we started using just two weeks ago, for the warmer one. We're both wearing long-sleeved warm sweaters or jackets all the time during the day, not just in evenings. I have put both my pairs of summer sandals through the washing machine, and put them away for the winter.

And this morning I went out for a short walk on my own (since my friend Sheila is self-isolating with her family, hopefully just for a few days, after a Covid positive contact). I don't walk along the Salt Lake trail when I'm by myself, but today I did go through what we think of as the main part of the park area.  And since there was nobody to chat with, I observed the trees and foliage rather more than I normally do.

The first thing that struck me was how green everywhere was looking: 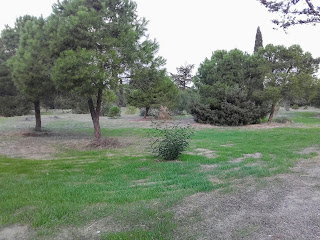 It might look a bit brown to those from rainier climes, but a month ago the soil was bare, other than a few hardy weeds.  Now there is grass springing up everywhere. 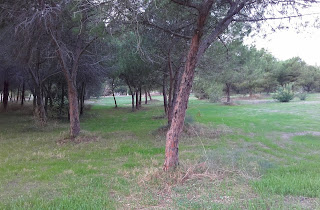 Most of the trees are evergreen; many are pines, of course, but there are others which aren't pine, but still don't seem to lose their leaves. 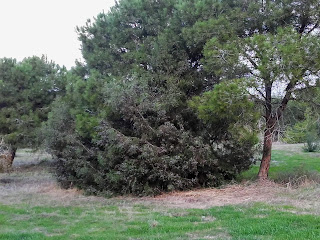 As I walked around the local streets, on a meandering route home from the park, I did see some evidence of plants that were changing colour, although they look brown and dead rather than red or orange: 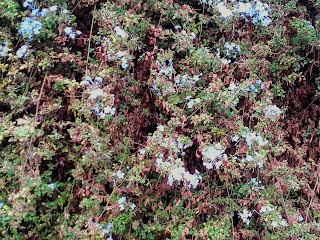 And there are citrus trees all over the place too. When we first saw these, twenty-three years ago, it was rather exciting. We had an excellent orange tree and several lemon trees in the back garden of our rental house, and it felt very odd  - and thrilling! - to pick fresh oranges and lemons.
Now, though we no longer have any of our own, we take them for granted.  The new season oranges and lemons are coming into the shops now, along with the satsumas I wrote about a couple of weeks ago. Trees like this are so commonplace that I tend to forget what a novelty they are to visitors from places that don't produce citrus fruit. 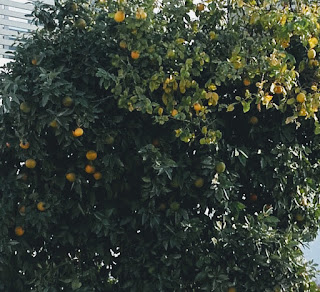 And then, as I was almost home, I finally spotted a climbing plant that actually looked Autumnal.  Possibly it's meant to look this way, and those are bracts rather than leaves changing colour - I know very little about plants - but I liked the way it looked anyway: 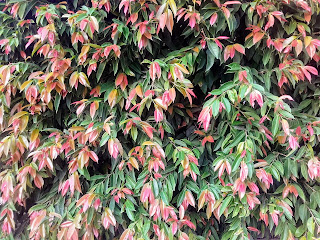 It's been good having some Autumn weather - too often Larnaka moves from Summer into Winter with very little in between. Tomorrow is Advent Sunday, and December starts on Tuesday. Today is supposed to be windy and rainy, although the sun shone for most of the morning and even now it's dry, albeit rather greyer. So we still don't know if our roof repairs have stopped our ongoing leaking!
Posted by Sue at 15:12