Shopping at Metro (and the froutaria)

At the end of last week, I wrote about a shopping trip to Lidl, and the disadvantages inherent in going there, as so many items are inconsistently stocked. So, in the interests of balance (and also because I'm beginning to run out of topics to write on...) I thought I'd write about today's visit to Metro.

Metro is the supermarket that we liked best when we first moved to Cyprus twenty-three years ago. It was the closest to where we lived, and seemed to be the friendliest. It's the only one that hasn't changed hands in the past couple of decades, and it's still our favourite. It's only a couple of kilometres from where we live, there's plenty of car park space around it, and the shelves are nicely laid out. They are not too high and the aisles reasonably spacious. There's a good choice of products - and, unusual in Cyprus nowadays, we don't even have to put a coin or token into the supermarket trolleys to use them.

We normally shop on a Friday, but Richard's busy tomorrow morning so we decided to go today. And while it wasn't yet urgent to go to Metro, there are rumours of more Covid restrictions to be announced tomorrow. So I thought we might as well go this week rather than next week. Since we only go around once a month, with brief forays into the local small Achna Discount mini-market most weeks, I made a list of the things which I knew were best value at Metro.

It was less crowded than on a Friday; everyone in masks, of course, and being careful to 'physically distance' around the shop. And we found all we needed, plus a few extra things on special offer that would keep.  And then, as we were about to join a checkout queue, I spotted a rare and unusual delicacy: dark chocolate Bounty bars! We first discovered them in UK airport shops, and have brought many back to Cyprus. But of course we haven't been to the UK for nearly a year, so we ran out of our dairy-free Bounties many months ago. There were seven on the shelf, so - rather selfishly, I suppose - we took them all. 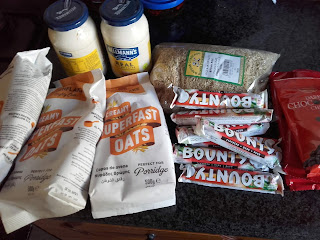 Hopefully there were others in stock elsewhere. And if not, maybe their rapid disappearance will encourage Metro to stock them again...

I don't think we're extravagant in our tastes, but it still surprises me how much more we typically spend in our monthly Metro shop than we do at the fruitaria over the course of a month.  Our bill did include five bags of cat litter (almost 20 euros) which should last us about six weeks. But even excluding that, our food, mostly store cupboard ingredients like rice, oats etc, came to 80 euros, for what didn't look like a vast amount of food.

Part of the problem, of course, is the refrigerated produce: protein food such as meat and eggs, and the vegan equivalents of processed meat, cheese and yogurt. 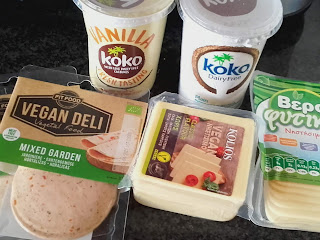 The variety and quality of dairy-free produce has improved vastly since we came here, but even though some of the 'cheese' was on offer, these are essentially luxury foods.

Dairy-free Flora and our favourite bread flour were also on offer so we bought extras of those: 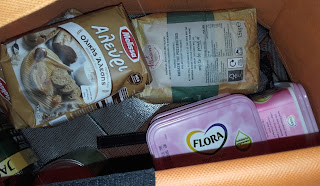 And some frozen peas, which immediately had to go in the freezer when we got home. We've tried many varieties of frozen peas since moving here, but unfortunately the cheaper ones are somewhat tasteless and lacking in texture. The only two brands which we really like are Findus and Birds Eye, so we usually get a kilogram or so of whichever of those is the least bad value.

Since the weather is somewhat cooler than it was, we were able to go straight to Achna Discount for a few other things that are better value there, leaving the cold and frozen items in a bag in the boot of the car rather than rushing to put them away.  We always get coconut milk and grape juice at Achna, for instance, and Lady Jane's wet food. 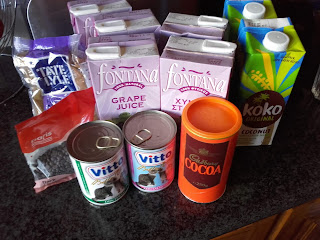 We also bought some paper towels and toilet paper - and that lot all came to a little over 18 euros.

Then over the road to the froutaria for a week's supply of fruit and vegetables. Or not quite, since we still had a few apples and carrots, a couple of sweet potatoes, a large courgette, half a head of broccoli and plenty of garlic from last week. 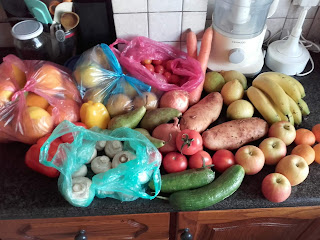 This fresh produce took up almost as much space as the food from Metro, but cost us a grand total of 15 euros. And since we'd parked by the fruit stall, which offers crates of slightly older fruit and veg at ridiculously low prices, I also spent a euro on some fresh peaches, rather surprised to see them at the end of November: 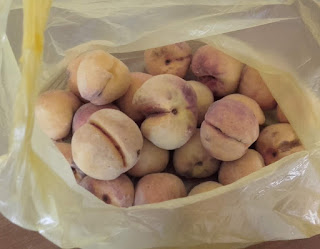 I will probably stew and freeze most of them.

As I said above, I don't think we're particularly extravagant in what we eat, but neither are we deliberately frugal. We eat chocolate, we use cocoa, and buy grape juice, all of which are considered (by some) to be non-essential. We eat chicken two or three times a week, and fish - which is surprisingly expensive for a small island nation - once a week.

In addition, we don't visit a lot of different shops to find all the best offers, and we mostly choose what we eat for nutritional reasons as well as enjoyment and taste. Brown rice and wholewheat flour are (usually) pricier than the refined equivalents, but we like them better. And since they contain much more nutrition, they are healthier, and thus actually better value in overall terms.

When people ask what the 'cost of living' is in Cyprus, it's impossible to give a figure, in part because there are such differing views on grocery shopping. We've known of people who use a lot more beans and lentils than we do for their protein, and spend no more than about 100 euros per person per month.  We've also known of people who buy ready-meals, or sauces in jars, and good cuts of meat, and might spend 250 or more euros per person per month. And that's not taking into account any take-aways or eating out.

I miss popping into the froutaria first thing, to buy just a couple of days' worth of fruit and veg, but doing everything weekly is probably more efficient. And it's always such a relief to have everything put away, and know that I won't need to do any more shopping for at least a week. Richard likes shopping, but I really don't.