Restrictions for the first half of December, island-wide

A couple of weeks ago, I wrote about the latest restrictions on travel, shopping, meetings etc in Cyprus. These were introduced in the hope of curbing the sudden increase in Covid numbers. Limassol and Paphos had stricter regulations than the rest of the island, but the only new thing that affected us was not being able to do any shopping before 10am. Which, in the scheme of things, is no more than a minor inconvenience.

Unfortunately, the number of new cases testing positive each day has remained in triple figures, mostly between 180 and 260. That's a lot when the population is only around one million. Equivalent to around 14,000-20.000 in the larger Western European countries, and they've had much stricter restrictions over the past month.

Here's how the overall case number chart is looking for Cyprus now, in bar chart form: 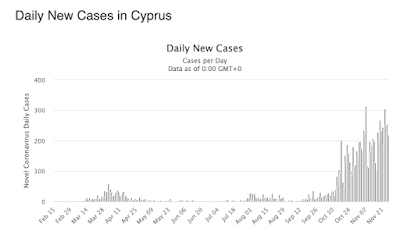 It's not good.
Part of the reason for the increase in positive cases is that testing has been increased quite significantly over the past couple of weeks.  But if the cases weren't there, they wouldn't be found. Many are asymptomatic, of course, which makes it harder to find them, particularly when people are casual about isolating, and reluctant or even unable to divulge all their contacts.
On a global scale, Cyprus hasn't done so badly:

Compare, for instance, to three of the worst-hit countries in the European areas:

(To read the statistics, you probably need to click the images to see them rather larger)
The significant figures are the total cases and deaths per million. The worst European country is Belgium, with nearly 1400 deaths per million. Of course different countries calculate statistics somewhat differently, and one has to take into account the age and general health levels of the populations. But those are unlikely to be significantly different in countries such as these.
Still, despite having done reasonably well overall, the recent increase in numbers in Cyprus is very concerning, and all the more so because the health system is beginning to struggle, as more and more people are having to be treated in hospitals each day.  A bar chart of the deaths doesn't look too bad - most days it's just one or two people, the majority with underlying health conditions. But each death is a tragedy for the family concerned. And the trend is not encouraging: 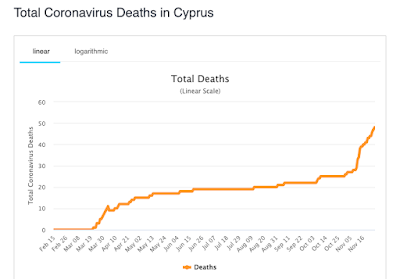 So, on Wednesday the health experts met with government advisors, and various scenarios were discussed, though no details were released at the time. Today there was another meeting, and the new regulations were announced shortly after 1.00pm.
Road restrictions to Limassol and Paphos have been lifted. The case numbers in Paphos have apparently improved, and limiting traffic to and from the cities was causing major traffic jams as well as a logistical nightmare, with everyone eligible to go to these towns needing to be tested for Covid first.
However, the entire island has a new, stricter set of regulations from November 30th-December 13th, in the hope of reducing numbers significantly. One that is going to affect us and our friends is:

That stops people having long drawn-out evening meals together (particularly Cypriots, who often don't eat until eight or even nine o'clock), and it will prevent us from our regular evening get-togethers for board games with friends, usually twice per week. But it's another minor inconvenience in the cause of preventing spread of the disease.
A slightly surprising new restriction is:

Restaurants to be open until 19:00 with the exception of take away and delivery.

Many restaurants don't even open in the evening until seven o'clock anyway. And even if one goes to an all-day restaurant at six o'clock for an early evening meal, it would be quite rushed to finish and be out within an hour. So this essentially stops people eating out in the evenings.
We were also surprised to see this:

It had been one person every 3 sq m, as far as I remember. This is going to make it more difficult to do any shopping - and we didn't think there had been any cases of people being infected via shopping. Hand sanitisation and mask-wearing have become 'normal' in shops, and people are pretty good at moving out the way of other customers, and keeping a couple of metres apart most of the time.
Other restrictions - the closure of gyms and casinos, public transport to operate at 50% capacity, and so on - don't affect us personally.  And, again, they're irritating to those involved, but in the scheme of things not a huge problem, particularly if it's only for two weeks.
We had expected a reduction of the number of people allowed in private gatherings in houses, but that's still set at ten. It doesn't even have to be the same ten people: there's no 'bubble' system operating here. We could theoretically invite eight people over one day, a different eight people the next day, and so on, leading to nearly fifty close contacts in a week.
We don't do that, of course. We normally see our closest friends a few times each week, and a limited number of other people.  But we were expecting some reduction in the numbers allowed for private gatherings, as those are where the transmission of the virus is most likely. Masks and distancing are not required or even expected in private gatherings, possibly because it simply wouldn't happen here.
As for what will happen from December 14th onwards, that will depend in part on the epidemiological situation. But according to this article on the Kathemerini site (right-click to translate, if necessary) they hope to return the curfew to 11pm rather than 9pm, and to allow restaurants to open until 10.30pm again.  Between December 23rd and January 1st, they plan to allow 15 people in private gatherings rather than 10.
Christmas is inevitably going to be very subdued this year. Maybe things will start to get back to normal in the spring: there's been some apparently encouraging news published about vaccine trials. But according to the Lancet, the results haven't yet been peer reviewed.  There's a concerning phrase in that article:

"How well the vaccines work in older people or those with underlying conditions and their efficacy in preventing severe disease are still unclear."

If the vaccines don't make any difference to those most at risk, then it's hard to see how we expect any semblance of normality within the next few months.