It's only three weeks since Christmas. That's easy enough to calculate, of course, but it feels like much, much longer. December - when we were still able to have up to ten people meeting at a time - seems like a distant dream.

Christmas Day was pleasant despite being unable to see any of our family. We were able to go to a church service in the morning, albeit in a masked and distanced way, and it was good to see people. Our closest friends came over for lunch, and games in the afternoon, followed by a high tea where none of us felt hungry, but all of us ate plenty. 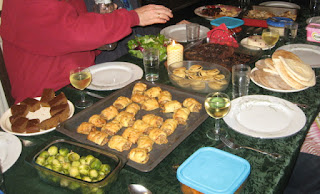 On Boxing Day we didn't do much; on the Sunday we had some other friends to lunch and mainly ate leftovers.

But the Covid numbers were climbing. On December 28th, there were 751 new cases announced in Cyprus.  That's equivalent to around 50,000 in the larger countries of Western Europe, or the UK. This is a small country, and while the hospitals weren't yet full, the authorities were getting worried. The restrictions - such as they were - from mid-December were due to end on January 11th. Schools were closed until then, and only two people were supposed to meet outside, although - bizarrely - we could still be with up to eight other people indoors.

On 29th December, after an emergency meeting, the government announced that people could no longer visit anyone else's home. That was in place until December 10th, we were told, but on New Year's Eve there was a relaxation of the rules. We could invite one other family to our home, and the curfew would not start until 1am on New Year's Day rather than 9.00pm as it had been the rest of the time.

So Richard took the opportunity of inviting some friends to sail on New Year's Eve; it seemed reasonable to be able to count his boat as part of our home, and was safer (from the virus perspective) since it's outside rather than indoors.  And as the wind was light, and the weather not too hot, I went too. For my first time on his boat Liza. 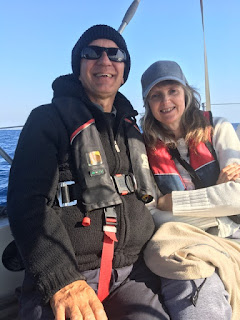 It was an enjoyable day, and I said I might even go again at the end of 2021.

In the evening we were the one household invited to our other friends for an evening meal and games; I just about managed to stay awake. I really wanted to make sure 2020 had gone... even though it took me a few days to catch up on the lost sleep. I don't do well with late nights!

So from January 1st we were back to virtual meetings only, with the exception that two people from different households are still allowed to meet outside for exercise. So I continued walking first thing with my friend Sheila. Sadly, although daily Covid case numbers dropped a bit, they were still in the four hundred range, so we knew the restrictions were not going to be relaxed on January 11th. Indeed, it was fairly certain that we'd be subject to another lockdown.

That has proved to be the case; it was announced last week that from January 10th until the end of the month we must stay at home, other than 'essential' outings, for which we must send an SMS request to the government. But it's not as strict as the lockdown last spring.  For one thing, we're allowed two daily requests rather than being limited to one. Somehow that makes an enormous difference.

We're also allowed to walk in parks or on beaches, as exercise is one of the permitted reasons for going out. And two unrelated people can still meet for exercise, though no more than two (unless one of them has under-age children with them).

The weather has been very mild, with no rain at all until Wednesday when there were several heavy showers. That meant that on Thursday morning, the flamingoes were much closer to the shores of the Salt Lake than usual. I didn't have my camera with me, of course, but was able to take a slightly better photo of a few of them with my phone: 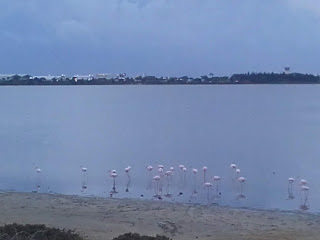 And I took a video, albeit not great quality, showing flamingoes walking, and some of them flying.  (If you decide to watch it, it looks better if you either use the full-screen option or click the YouTube option to see it there).

Walking first thing is not just good exercise, and a chance to spend time with a friend, it's a great start to the day, which gives me more energy and focus.  At least, in theory. It's not easy to get things done in this continued uncertainty. And while we had plans to do various things in the house, we didn't manage to get organised enough to buy what we needed before the current lockdown. All shops deemed non-essential are closed, although many more now offer online ordering.

So the first week has almost ended, and it hasn't been too bad. Perhaps it's easier because we've done it before. Maybe it's less stressful because we're no longer worried that the virus might leap up at us from the supermarket. We all wear masks, and of course we do wash our hands when we arrive home, as it's a good idea in general. But I often forget to sanitise my hands on the way in and out of shops, and it's not enforced. Nor is anyone wearing those horrible disposable plastic gloves that were required back in the spring last year.

And perhaps it's less worrying because, although the scope of Covid has been far, far worse than anyone imagined, the vaccinations offer hope, at last, that the elderly and the most vulnerable will be safe. Of course it's very difficult for many businesses, hard hit by last year's lockdown, suddenly having to close again. Some may never recover.

The positive case numbers have been a bit better - around 250-350 the last few days, reflecting the fact that we haven't been able to meet in other people's houses since the start of the year. We don't know what will be announced for February; perhaps 'non-essential' businesses will be able to open again, if the numbers stabilise and the hospitals stop being over-crowded. But I doubt if we'll be allowed to get together with friends inside for some time to come.