I have written a post each year for the past decade on - or close to - Christmas Eve. So as Richard is currently carving the turkey, with the doors closed to keep the cats out, I thought I might as well continue the tradition.

The previous posts have started with an illustration of our Christmas cake, each one pretty similar to all the previous ones. I iced this year's cake yesterday, using home-made icing (with aquafaba rather than raw egg white) and since we had almost an entire tub of glacé cherries, I put some of those on, just to make it slightly different from previous years. 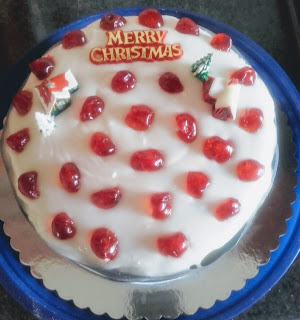 This is not, of course a typical Christmas. We miss our sons desperately, particularly Tim who has spent every Christmas with us, other than one, until this year. But travel from the UK is difficult at present, with Covid-test requirements, and now seven days of hotel quarantine. There's no guarantee of being able to get back again, either. So, sadly, it didn't make sense for anyone in the family to come out to Cyprus this year.

The case numbers in Cyprus have been getting worse, but - so far - we're still allowed to gather with up to eight other people in our home. Church services were cancelled, so everything moved online, including last Sunday evening's carol service. But the government has made a concession to the Orthodox Archbishop and has allowed congregations to meet (so long as they are masked, distanced and no more than one person per three square metres) on Christmas Day only. So we will be able to attend a live service tomorrow, rather than just streamed.

Our local friends who usually join us for Christmas will, unless some disaster strikes, be coming for lunch tomorrow. Which means that, despite wanting to keep it simpler than usual, I found myself baking and cooking far more than will be eaten in two meals. I like to over-cater - much better than running out, although there has never been a danger of that. Besides, if there's too much food, then I don't have to cook anything much else for several days, and that's always a good thing.

It's been a long and depressing year, and I realise that it has been considerably worse for many others than for us. Our hearts go out to those who have been bereaved, or who have suffered badly with the virus and its after-effects. We hope and pray that the vaccines will be effective, and that, gradually, more normal life can resume in the spring. 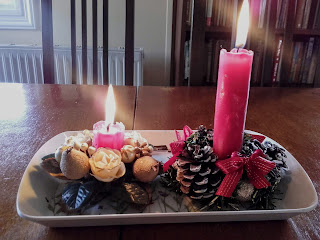 As I said in the last post I wrote, we only sent six Christmas cards this year, and didn't expect to receive many. Until yesterday we had received eight, two of them giving to us by local friends. Then we went to the Post Office to check our box, just in case there was anything... and there were thirteen cards, all from the UK, posted between November 30th and - astonishingly - December 17th.  And one card arrived in our letter box outside our house.
So in addition to last year's cards, which we always put up as part of our regular decorations (since the majority arrive in January), we have MORE new ones than usual before Christmas this year, displayed on a couple of bookcases: 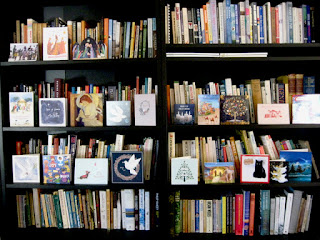 Rather than rambling on for longer, I will end this post with a photo of our living room a week or two back when Richard put a fire - complete with crackling noises - on our television. 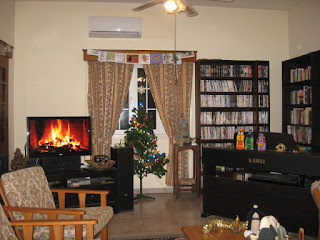 It almost made the room feel warmer:
Wishing peace and blessings to all for this most unusual Christmas season.
Posted by Sue at 16:38

Sue runs her tv fire regularly, not just now, but all through the winter.

I'm glad that you have come through unscathed, directly at least, by the virus.