A Long and Detailed Post about a 'Typical' Day.... part 4 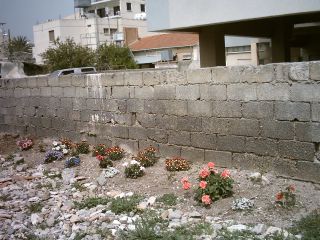 (The flowers at the far end of the garden with yet more weeds between the stones... the plants are doing better than they were a week or so ago so that's encouraging)

10.45 - Decided to do a bit of weeding at the far end of the garden, before it got too warm, so managed about 15 minutes weeding around the flowers and also amongst the stones which are just in front of the flowers. I've no idea how weeds grow so fast in Cyprus: it hasn't rained for two weeks, and the ground is extremely dry other than where I've watered, but the weeds keep on growing....

I do hope it will rain at the end of the week, otherwise I'm going to have to start watering the trees - and March seems far too early to start that routine.

By just after 11.00 the sun was on the patch where I was weeding, so I emptied what I'd pulled onto the compost heap, and came inside to have a quick wash and a glass of water. Then switched the computer on to check for mail, and made our bed while waiting for it to boot up. The computer is currently in our bedroom where we moved it before our last guests. Usually it lives in the study but someone else is coming to stay in a couple of weeks so it didn't seem worth moving it for that time, even though I prefer in theory not to have a computer in the bedroom.

11.15 - downloaded mail from my three addresses. Nine in my oft-spammed address, of which four were genuine and five were spam. I use Mailwasher to blacklist the spam and it does seem to be working. I'm not currently getting any of the really nasty stuff, and only about five a day rather than the thirty or forty I used to get.

No mail at all in my family-and-friends personal address, and 81 in my lists address, of which four were non-serious spam that I deleted instantly. Decided to type up what I'd been writing down so far about today, and that took half an hour to this point!

Read list email... replied to one quickly but nothing else. One of the lists is so big I may have to unsubscribe, I keep deleting messages unread from it. Just reading about 40 messages took 25 minutes...

Noticed that the washing machine had finished its last spin again so went to hang out the towels and sheets etc. Had to bring in the used towels as the lines were crowded (and they were quite dry anyway). Dan arrived back after his performance of 'The Little Man', saying he felt exhausted. Ah, maybe he hasn't been taking the vitamins and minerals (including iron) that seemed to be helping him. It's so difficult to remember every day...

Having finished with the washing machine for the day, I decided to make some yogurt. In our kitchen (as is fairly typical in Cyprus) there are only two power points... one has a multi-way extension thingy which powers the fridge, the microwave, the coffee machine, the food processor, and has one slot which is used by the kettle or the toaster or the ice-cream churn or the small hand mixer as required, since those are only each on for a short time.

The other power point is mainly for the washing machine, but on top of that live the steamer and the yogurt maker. Both of them tend to be used for longer periods than the kettle etc, so plugging them in the one spare slot makes life complicated; particularly the yogurt maker, which has to be on for 4-6 hours and mustn't be moved or jogged when it's working. So I use them when I'm not using the washing machine, and they're out of the way enough that they don't get disturbed, so it works well.

Anyway I'd noticed earlier that we were into our last pot of home-made yogurt, so I used what was left of that as the starter for another batch. I use evaporated milk (with a bit of water to make it up to 800ml, the quantity I can make at one go, and some dried milk for extra thickness) so I don't have to do any cooking - the whole process only takes about five minutes. So that's on and should be ready late afternoon.

Dan says he has a drama rehearsal for the youth play 'Mugged' this evening from 7pm - 9pm, so he won't be able to go to karate - however he will be able to eat beforehand, which does make life simpler. Sometimes he doesn't eat until he gets back from karate about 10.30pm.