(Note: if you found this page after searching for information about Cyprus insects, you might like to look at cyprus-life.info/cyprus_insects.html. The post below is about my personal experience of insects in our home in Cyprus)

I am not a fan of insects.

That was an example of the Great British Understatement.

When we lived in the UK, this wasn't really a problem because most insects are outside most of the time. I could deal with small spiders in the house, after all they catch other insects and eat them, and when a wasp came in I had no problem squashing them with rolled-up newspaper. I thought these were about as bad as it gets... how wrong could I be?!

Here in Cyprus, I have to defend the house methodically during the summer. In fact it starts in the spring when I clean out the food cupboard and spray them with Biokill (what a wonderful substance it is - fatal to insects of many varieties, but perfectly harmless to warm-blooded creatures such as humans and cats). 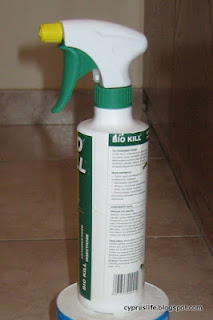 When the cupboards are dry, I replace all the food - which is, of course, stored in airtight glass or plastic containers anyway. This is my defence against ants, which can appear any time from about March onwards, marching in through some previously undiscovered crack. Or indeed through the window. So far we haven't had any ant trails in the house this year, but it's only May.

Around the same time of year I start plugging in a mosquito repellant device in the early evening, and ensuring all the windows are shut by about 7pm, other than those which have mosquito netting over the shutters. Yes, mosquitoes are rife in this country, although thankfully they don't carry malaria or any other nasty disease. We don't even feel their bites now, we seem to have become immune. However they can be a major nuisance in the night buzzing around our ears keeping us awake, so I prefer to keep them out of the way altogether. They're a problem in Spring and Autumn, but not during the Summer. Probably it's too dry for them then.

Spiders are an unexpected problem in that there's a breed which bite. We didn't realise spiders could bite until we lived here. Oh, we'd heard of nasties like black widow spiders in the USA, but this is Europe... unfortunately, though, there's a brown kind of spider which jumps, and also bites. Not very big, and I assumed they were entirely harmless when we first saw them, until we realised that several whitish bites in one area means a jumping spider rather than a mosquito. The spider bites last much longer too and itch like crazy. So I sweep spider webs out of the way, and spray Biokill on the window-sills.

Fleas are perhaps unavoidable with cats in the house, and while the thought used to horrify me, they're the least of our worries these days. Cats who go outside will get a few fleas, and there's not much that can be done about them. We did try collars but the cats hated them. Biokill on the carpets and furniture, and regular vacuuming (as well as annual carpet-washing) seems to take care of most of them. Cat fleas don't bite humans, or very rarely.

Last but unfortunately not least, my most dreaded insect is (shudder) the cockroach. I had never seen one before we moved here. They're not huge ones - or so I'm told - and they're not a serious problem since we don't find the floors crawling with them at night. Just as well or I don't think I could possibly have stayed here this long! Mostly they live in the septic tanks out of harm's way. However, during the summer we do get a few of them venturing inside the house in the evenings. Another reason for biokill on the window sills, and windows being closed before it gets dark. Yesterday I also sprayed biokill on the outside walls below the windows, and I've bought the roach traps which I put in suitable places in the kitchen and bathroom.

The first one of the year came in last night, hence this post. Daniel found it in his room, and one of the cats tried to chase it. Richard got rid of it; if he isn't here we usually just stick empty litre-size yogurt pots over them to stop them scuttling around the house. I don't know why we find them so awful - they don't bite, and don't actually choose to come near people. They seem to stay on the floor mostly, although I used to find the occasional one in a cupboard before I started spraying the Biokill around.

But they are so, so disgustingly gross. For the first couple of years here I couldn't even say their name. At least I don't scream when I see one any more... but I seem to spend the summer evenings in a low-key state of dread, glancing round at the least rustling noise just in case it's a roach.
Posted by Sue at 15:57

There is one other insect that you haven't mentioned. I hope you just didn't met it. It is a tiny midge. It is about 1.5-2.0 millimeters big. It doesn't fly for too long, rather jumps distances of about 1 meter at a time. It is very difficult to spot. It makes no sound. But it bites like a dog. The bite of such a midge is much worse than from a mosquitto. It itches and stays longer. And it is alo much more painful when the medge actually bites. Yuck.

I've been told that they live in the dry grass, but we don't have any around our house. Still, when we get one of those inside, noone sleeps and everyone is hunting the damn thing.

you sound like you need deliverance for that phobia, Sue ;)

Ah yes, I've come across tiny midges, I think they call them no-see-ums because they're quite difficult to see. But we've only been bitten by them up in the Troodos mountains during the summer. Mosquito repellant seems to work quite well to keep them away, and lavender oil is good to ease the itching.

Of course I also didn't mention wasps, which can be a nuisance but only rarely like in the UK, or flies of various sizes, or woodlice which congregate in the compost heap... or indeed ordinary non-biting spiders. But I don't have much of a problem with any of those.

I love your example of British Understatement, you definitely ggave me a chuckle.

Moving to Austin has given me a whole new appreciation for incests. Last week we had a two inch cockroach walking across our ceiling. It gave my husband quite the start. (That's my American Imitation of the Great British Understatement))

I was in Paralimni 2 weeks ago, we found, outside some extremely large insects, well only 2, but on seperate occasions. I dont know what they were. They were about 4 inches long, grey/green in colour. Flying away only when pushed withthe broom! And when it hit the car it went with a 'thud'. My sons friend lay down on the floor and stoked it!! Oh how I wish we had taken a foto.

We've been here since sept 09 and I've so far I've found in my house a trail of red ants so small I needed a magnifying glass to be sure that they really were ants, on my kitchen drainer I found a preying mantis, and this evening I had a large rhino beetle fly in through my back door! oh and my cat brought in a millipede! the garden is a place I don't really poke around in too much having said that though I have spotted a small snake out there!

Interesting that Leonid mentioned a tiny midge. We live next to a forest, and since the last week of April the house has been swarming with midge type flies- they don't seem to bite that we have noticed, but I have seen them jumping. But they go for wine or beer in a glass, and swarm around citrus fruit, especially oranges that we used to keep in a basket..not any more. These blighters munch through the orange peel en masse. They are all over the kitchen surfaces and collect inside the waste bin.

Has anyone any idea how to get rid of these insects? Fly spray does work, but I get through a can each day. Help!

The large insect in Paralimni sounds like a praying mantis!

I lived in Cyprus for over 2 years and had I known what little beasties there were out there, I probably wouldn't have gone. I was told I'd probably not see a snake, well the venomous one anyway ... took me 3 months to find one slithering up to me with my back turned!! I have to say my daughter found this hilarious as she had never seen me move so fast. We had a black one living in our front garden but this was harmless. We never had ants as we put a british copper coin on each windowsill as I was told this would keep them away and it did. Cockroaches we had a few (big ones too) that my visitors found terrifying but by this stage it was getting quite tedious so I calmly disposed of it. Centipedes were really bad, they could fight back quite well but I found an enornmous book that you jumped up and down on did the trick. The chicadas were so loud and you don't want to stand under the tree they are on because they go wee wees and you get very wet. The prosession caterpillars were amazing but mustn't touch as OUCH!! However, what with all the above, having bearded dragons in your garden is amazing to watch and even the odd chameleon was awesome, well worth the other 23 hours of the day you are twitching wondering what evil awaits you in the next room or under your bed covers!!! Would do it again without a doubt

I had a similar experience moving from a colder climate in Canada to California. The insects are invading (especially the ants!) We don't have as many mosquitoes though.

Im moving to Cyprus in less than 2 weeks and im itching all over just thinking about all of this im so scared now im a massive bug fobia and im worried about my 12 month old son???

Mosquitoes are a problem at this time of year, but you can get various sprays to keep them away. And Biokill is still available to spray furniture, doorways etc to keep spiders and other bugs away.

It's not as bad as it sounds - or perhaps we've just got more used to them over the years. Most countries have bugs and insects of some kind, and it's usually possible to keep them under control.

Hi, came on here as just returned from the troodos mountain area and covered in fairly large bite marks. Not that painful and didn't really feel the bite but itchy at times. No see ums were mentioned in a previous post and someone there mentioned these. Feels like I've brought one back as bites still appearing. Guess I'm going to have to ride this out and maybe I will wear some sort of repellent next time. Spoilt the holiday. Did spot a couple of very small mozzies. The worst I've ever been bitten while away and pretty certain it wasn't mozzies. There were cats, a dog and walking along a stream most days. Any input appreciated. Was really pleased as didn't get bitten at all at the start then loads at the end.