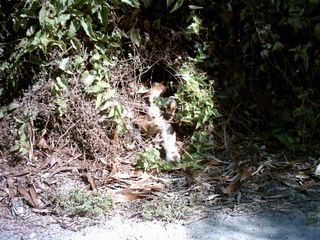 Why are kittens so adorable, and their mews so plaintive?

We have four cats, the youngest of whom is quite territorial, and have turned down offers of many others - delightful though they were. One cat per human is plenty.

But this morning as I went outside to do some watering, I saw some tiny kittens, about two months old I suppose, emerging from a climbing/creeping plant that grows against our boundary wall, near the street. They looked reasonably healthy for feral kittens, and there were seven of them, mostly ginger or brown-and-white. That solved something that puzzled me last night: I heard a high-pitched squeaking several times, and thought perhaps a kitten was stuck in a tree. Or had ventured too far from its mother and got lost. But the mewing had stopped by the time I was going to bed, so I guessed the mother had found the kitten again.

However there was no sign of any mother this morning. Perhaps she had gone hunting, or simply needed a break from her noisy family. I did scatter a few of our cats crunchies - the only food they eat, at our vet's recommendation - but they took no notice. Still, I thought perhaps their mother would appreciate them when she got back.

There was still no sign of her later on, and this time when I went out three of the kittens came towards me, evidently wanting something... very unusual for feral cats, who are usually frightened of humans. I gingerly stroked one of them, but didn't want my scent on them, which might potentially scare their mother.

They were still there by the time Dan got home from the theatre for lunch, and he was very worried to see them: apparently a day or two ago he saw a dead cat in the street, which had similar colouring to these kittens. I wouldn't have thought they would survive very long without their mother, and he couldn't remember exactly when it was, but suddenly I realised we might need to do a bit more for them.

Saturday is early closing day in Cyprus, so we couldn't go and buy any Lactol, so I tried giving them a tiny bowl of milk. They had no idea what to do with it. Then we tried yogurt, and they simply walked through it. We tried putting tiny bits on our fingers, and they sucked it off, but still didn't get the idea of actually eating it form the bowl. Evidently they're much too young to be without a mother.

Our neighbour over the street, who likes cats (unusually for Cypriots) came and saw them, and said we should move them away from the road since they seem inclined to follow anybody they see. Not that it's a particularly busy road, but then most people around here aren't very fond of cats. So he brought us a big box, and we moved them further down our driveway. I tried giving them tiny pieces of bread soaked in milk and that was slightly more successful, but it's not exactly ideal kitten food.

They're still mewing, and there hasn't been any sign of their mother yet, so I'm afraid Dan might be right. Not quite sure what we can do, though. I don't suppose they're old enough to pee on their own, and they certainly don't seem to be washing themselves - and now they have yogurt all over their faces. I guess we'll have to take a little sponge and some warm water outside later and try to wash them and encourage them to pee.

We don't know anyone who wants kittens at present... last week some friends had found just one kitten, rather older than these, but couldn't adopt it because they have dogs. They took the kitten to church, and did manage to find someone who wanted a kitten, but only one in probably a hundred people...

I just got of the phoe with Humane Sciety here in Austin and this is what they said (I haven't read your new post yet, because I want to get this down while it's still in my head)

She said that cow's milk and milk products are very hard on cat's digestive systems. I don't know about goats. There is a special kitten's milk available in the US, but I don't know if you'd be able to find it Cyprus.

She said that if you don't have kitten's milk it would be better to just give them water and cat or kitten food. You can soak the food in water to make it easier for them to eat and to relase the aroma.

She recommend putting a hot water bottle in their box with them. If they seem unsettled to put some type of clicking clock in thir box to calm them. At this young age they are best left together for social development. Kittens seperated from their mother at too young an age can turn quite nasty as adults

Thanks for the comments and for going to that trouble!! There's a brand of kitten milk here called Lactol, but shops are closed Saturday afternoon and all day Sunday, so I can't get any till Monday. A friend who has reared kittens came over with some soft cheese and they had bits of that; I also gave them some warm yogurt. I realise it's not ideal but they need to have something, and only two of them seem able to lap so far. Our friend thinks they're no more than three weeks old, so I'm not sure what their chances are but we'll do what we can. Suppose I should blog about it more, actually!