I think Summer's really here now. It feels hot and sticky. Our air conditioner still isn't working, so my computer is still in the study, where at least there's a breeze. The weather site tells me it's currently 32C in the shade, with 46% humidity, which is a little disappointing: I thought it was more humid than that. It means there's still a long way to go till it reaches 80% humidity and more, as happens in July.

Richard spoke to the a/c repairman yesterday. He wasn't terribly hopeful: it could be that the compressor has gone. In which case it would be better to buy a new unit altogether, since the cost of the compressor is about three-quarters the cost of a new air conditioner. Maybe we'll do that, since we really do need one for the computers. And for a place to go to cool down when the humidity is high. The problem with a/c, of course, is that it makes everywhere else feel even hotter by comparison, and the kitchen feels like an oven even when nothing is cooking. When we have our own house, air conditioning in the kitchen is a necessity!

We're thinking about ceiling fans too. A catalogue for the Kleima Electrical shop shows them much less expensive than they used to be. We need to change the light fitting in the dining room anyway, and we now have a ladder long enough and stable enough for it to be relatively easy for Richard to fit some ceiling fans. They wouldn't reduce humidity, but at least would move the air around much better than a regular fan. We might even think about having some in the bedrooms, too.

This morning I cleaned Daniel's room, since two people will be sleeping there from the end of this week until the middle of July. He did a lot of tidying and organising before he left for Africa last week, but there were still bits and pieces lying around. It didn't take too long although it still needs vacuuming. Probably tomorrow morning since afternoons are so much hotter and stickier, and our vacuum cleaner gives out a lot of heat. 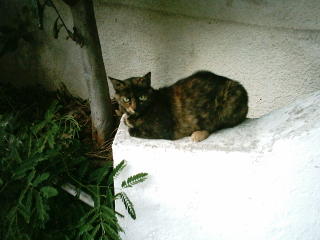 Sophia, Daniel's cat (or rather, Daniel is Sophia's person) sat on his windowsill this morning and talked to me quite a bit. That was encouraging. She's been very quiet the last couple of days, evidently missing him. On Saturday she sat outside on the step, as she does when waiting for him to come home from the theatre group. On Sunday we barely saw her at all. Yesterday she did appear briefly in the morning, and again in the evening, but other than that wasn't about. However it seems as though she's accepted the situation - he did tell her he was going away for two months, and she's remarkably good at understanding him. Cats are amazing animals.
Posted by Sue at 15:45

Very similar to temperatures and humidity in southwestern Ontario today.

Go for the ceiling-fans, Sue. I spent ten years in and around Toronto, where most of the summer involves temps in the 80s and 90s, and humidity in at least the 80s (sometimes in the 100s - I never did understand that - doesn't that just mean "wet"? LOL). All of those years were spent in houses without air-conditioning, and that was okay, but without ceiling-fans, I don't think I'd have coped. My great-aunt lives near Atlanta, Georgia, where *winter* temps are in the 70s, and summers are often over 100 - and she rarely turns on her a/c, because the shade of the trees surrounding her house, plus her ceiling-fans, is all she needs. - Deb W

That photo of Sophia is wonderful, you have been making me so want a cats again.

Our weather patterns are similar to yours and I find it difficult to imagine surviving the summer with out air conditioning. We also have ceiling fans and only just installed the one in our living room a few months ago. They really do wonders.