So... this morning we took Daniel to the airport. A pretty sociable time of day, really, given the number of night-flights that happen from Larnaka. We got to the check-in queue about 8.45am, for a flight at about quarter to eleven... 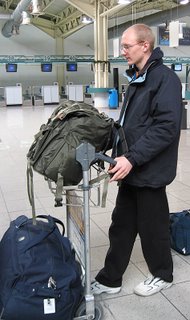 His luggage was rather overweight on our bathroom scales when he finally finished packing last night, but didn't register nearly so much at the airport. We think the case wasn't fully on the conveyer belt... whatever the reason, his bag (which we thought was nearly 5kg overweight) was checked in easily. Not that they tend to quibble on Cyprus Air about a few kilos. Dan's backpack (his hand luggage) was about 12kg but they didn't weigh that, or query its size.

It's not been an easy week, counting down to today. Dan's said goodbye to dozens of people, some of whom he might never see again if they leave Cyprus before he returns. He didn't finish tidying and organising his room, but I can do that in the next few weeks, a little at a time. Sophia, his cat, has been quite disturbed all week, but when the rest of us got back from the airport this morning she was asleep on our bed and seemed reasonably content. She was all right when he went away for two months last summer, other than being a bit more attention-seeking than usual.

But two years is a lot longer than two months, and I'm not sure it's quite hit home to any of us just yet. I've been tearful most of the week, particularly yesterday and first thing this morning, but now feel almost numb. Life has to go on, of course, but - as I always suspected - the 'letting go' phase of parenthood is unquestionably the most difficult so far.
Posted by Sue at 12:10

Oh, Sue - I'm all teary myself thinking about our babies leaving home!

(((Sue)))
I know how you feel-I was dreadful when Dd1 spent a couple of months away in the summer, sailing with another HE family. We were thrilled for her and missed her terribly at the same time!Goodness knows how I'll be when they leave for longer or permenantly.