Since Tim is now 18, and wants to learn to drive, the first step is to learn the rules of the road (what we call the 'highway code' in the UK) and take a theory test. So he paid £2 for a copy of the Cyprus 'road traffic act' in English. Not particularly good quality printing, but never mind, so long as it contains what he wanted...

It starts out fine. A little formal and convoluted in places, but that's often the way with translations from Greek. Pedestrians are told how to cross roads, and drivers are warned to be careful of pedestrians. Interspersed in the text are the kinds of questions that might be asked: for instance,

When you see a ball rolling in the road what should you do?
You should stop because children are probably playing with the ball and a child may run after the ball in order to catch it.


That shows rather nicely, we thought, the way that pedestrians and children really are (mostly) treated courteously and considerately by drivers.

Some of the instructions seem a little obvious - such as making sure there is room to open the door before doing so, but then some people do take the law literally. The first indication that perhaps the translator was getting bored (and thus a little careless) is on page 10, when we read:

What must you remember before leaving your vehicle?
- You must be sure that you have pulled up the hand brake, stopped the egging and locked the doors.

Most people don't bother to lock their doors around here, but we really don't know whether they stop the egging....

Then we were a little puzzled (on page 13) by this question and answer:

What are the safety discs and where to we find them?
- These are small stones (reflectors) and are found upon small pillars on the left and right of the road, on corners or turns and where there are obstacles in the road. 'Those placed on the left are red and those on the right white).

Small stones on small pillars sounds like some strange religious rite, but we think they're just talking about reflectors that show up after dark.

There are then a few pages about hand signals (are those used any more?), traffic lights, and the standard triangular, circular and other international road signs. Including, oddly, a whole page about those for level crossings, controlled or otherwise, despite there being no trains in Cyprus, and thus no level crossings!

By page 29 we're getting to motorway and area signs (some of which are called 'sings' in this booklet) - then out of the blue is this question:

When you come face to face with another vehicle what must you do?
- Do not insist that the other vehicle goes off the asphalt.

It does go on to say which should give priority on hills, and that heavier vehicles should give way to lighter ones.

This is followed by this rather bizarre set of instructions, which we're quite sure nobody obeys:

Quite apart from the fact that very few people can remember the pre-decimal 'feet' measurement, and that cars generally drive a great deal closer than 120ft, we've no idea how they would divide, as if in a dance, to form two groups as soon as a seventh car joins them!

On page 34, I think somebody more mathematically inclined must have taken over the translation. I'm not entirely sure what this means, but it's right beneath a diagram of a T-junction:

Horizontal marking: What does it means and what must the driver do?
- The sign STOP is complemented with a white line vertical to the axis of the road and with another white line in the middle of the road and lengthwise. It indicates the position at which the driver must stop his vehicle before entering the main road....

Then, right after more complicated lessons on road markings, is this unrelated question:

Up to this point, the guide was wordy, complex and muddled, but we could at least make sense of it. Then we got to page 40, which I had to photograph for the full effect. Click the small image to see a full-screen version: 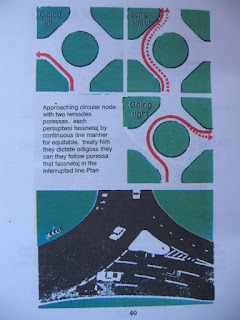 If anyone can interpret this, please do let me know...

That does seem to be the only page in total gobbledegook, but there follow instructions - a page each - on how to turn left or right, and how to make a three-point turn, complete with diagrams. Then this slightly strange instruction:


... so, if we see a sideboard on the street, we must go back and collect it.

Underneath is an even stranger instruction which sounds excessively dangerous:

This is a country where people drive on the left (or are supposed to, anyway). So they're saying that if you're on a main road, driving on the left, and see a turning on the right which you should have taken, you should drive onto the WRONG side of the main road, then reverse into the side street.

What's really worrying is that this one doesn't appear to have a typing or comprehension error. The accompanying diagram suggests that this is exactly what they do mean! Sure enough, it's something we've seen several times. No hint that they should drive ahead until there's a safe place to turn, and then drive back on the other side of the road so as to make a left turn!

After this, we barely blinked at such instructions as:


The examines [we think this refers to the student taking the test] must know:
- How to dive carefully....


And felt quite moved by this:


Look upon the motorcyclists with sympathy and protect them. The dangers they face are many more, because they rely only on two wheels, the chassis of the motorcycle doesnot offer them any protection and they are exposed to the weather conditions.


But I did feel a little perturbed by this question on the final page:


When we notice from the indicator panel that the motor is overhead, what are the usual causes?

Um... wouldn't we notice if the car was upside-down without having to check the indicator panel??

Fortunately we realised from the answers (such as 'not enough water in the radiator') that 'overhead' was simply a typing mistake for 'overheated'.

So... all Tim needs to do is learn the contents of this book so he can take the written exam and get his 'learner's licence'.

Our visitor, meanwhile, enjoyed the booklet so much that she's going to buy several of them to take home for family Christmas gifts!
Posted by Sue at 15:40

Loved this post - chuckling over it kept cheered us on the way to a hospital appointment.

I loved it too.

At least the diagrams give a clue!

holy crap! I live on this island for more than 3 years but that actually took my words away :) welcome to a unique and beautiful island!

It explains a lot, I had tears rolling down my face. But what I really want to know is Did Tim pass his test???