Richard's mother arrived on Wednesday evening. We didn't do a whole lot on Thursday - popped into the town, chatted, sat in the sun, played some Scrabble in the evening. It's been mostly sunny in Larnaka, though no warmer than about 22C, and quite chilly after dark.

Friday was my birthday. Not that birthdays are a big deal these days... but I had some nice pressies and some cards. We did our usual weekly supermarket shop in the morning, and drove past the site of our old house, which was knocked down four months ago. The site was completely cleared, as the photo on that post showed, but with a wet winter plenty of weeds have grown back. And now, apparently, it's being used as a car park for the people in the street: 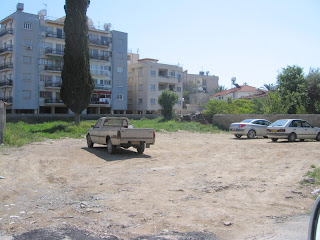 Tim baked me a delicious lemon cake, though it didn't rise as much as he had hoped. Probably because the tins were a couple of centimetres bigger than they should have been for the recipe. He forgets that cake ingredients have to be multiplied by one-and-a-half if using even slightly larger tins. And the icing was a little too wet so it drizzled over the edges. But it tasted very good, anyway! 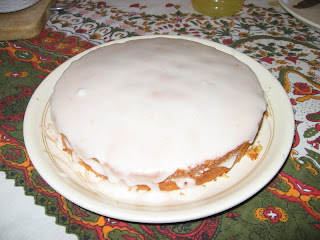 In the afternoon Richard's mother and I went for a short walk to the Salt Lake Park: 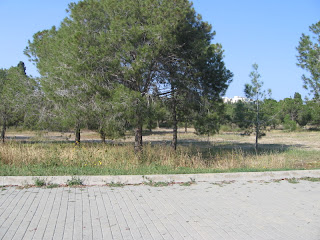