We heard rumours it would happen...

On Saturday, we even saw one.

But we didn't quite believe it would happen to us.

Then today, amongst the Christmas cards, bills and junk mail in our PO Box, there was a medium-sized yellow envelope: 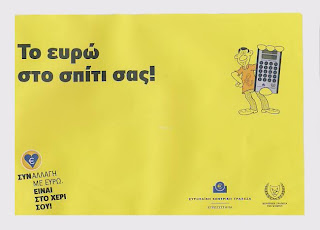 At first, I thought it was just more junk mail. But I opened it anyway. Inside, there were lengthy descriptions (in Greek) showing the pertinent parts of euro notes: 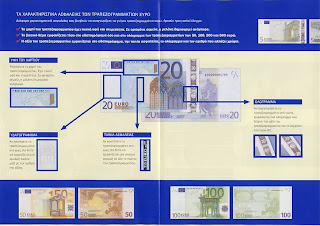 There were two cards showing 20 euros on one side, and 50 on the other. They were that strange kind of material where bits appear and disappear as you hold it in different ways towards the light.

I've no idea why there were two of these.

In fact, I'm not even sure why there was one of them. I have no idea what it's for. But this is what it looked like, as close as the scanner can get it: 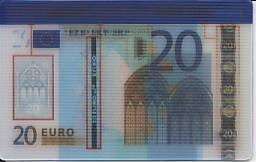 Most exciting of all, was this blue box: 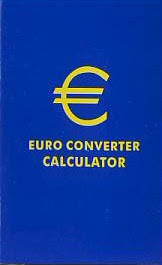 Yes! Finally we had one in our house. A special Cyprus pound/euro calculator: 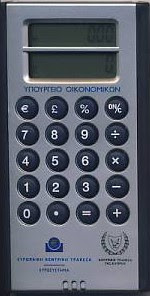 There were some instructions to use it, too, just in case anyone couldn't figure it out. Basically, you select either euros (€) or Cyprus pounds (£), then key in an amount which appears in the lower window, while the conversion (in the other currency) appears in the top screen.

Well... kind of. I'm not actually sure why we need these, since we can always use regular calculators. You can't do anything useful (like add Cyprus pounds to euros), or what shopkeepers will need in January (such as calculating change in euros when paid in Cyprus pounds). And although I suppose it's quite fun to see instantly whether or not the dual labelling is correct, it seems a bit sad that they didn't produce these before all the shops went around working out the euro price and putting the stickers on.

I'm also not sure who paid for these gadgets, and ensuring that every household on the island receives one...

If you'd like to read all there is to know about Cyprus changing to the euro, and much that there isn't to know, I can do no better than to direct you to this excellent post about euros, on the Letter to Larnaka blog. I must say I hadn't thought about the scenario in clubs and pubs around the island, celebrating on New Year's Eve... suddenly, on the stroke of midnight, they will all have to start accepting euros as well as Cyprus pounds, and change will have to be given in euros.

It's almost worth staying up late and going out to see if it happens.
Posted by Sue at 19:23

I thought about your envelope for the dustmen with the Cyprus Pounds in for Christmas 2008! Foiled again!

Oh, my goodness! You are so right... I hadn't even THOUGHT about that.

Thank you for mentioning it!!! I might have had that envelope sitting there all year...

You sound keen on the change to euros. Isn't there any resistance to losing the Cyprus identity or are pounds regarded as 'foreign'?

I don't think national identity has anything to do with currency - it's just what we use to buy things with, after all. And each country has its own style of euros - the Cyprus ones will feature various national symbols such as the moufflon.

It's much more practical switching to euros since we have so many European visitors here, and so many Cypriots travel frequently to Europe - particularly Greece - and other countries where Cyprus pounds are unheard of. To travel in Asia one has to take either euros or US dollars anyway - so it'll be much more convenient having euros as the regular currency.