Jemima is still missing - in Larnaka?

It's now a week since we realised that Jemima, the third of our four cats, was missing. I know I saw her on Saturday night, last week. She sat outside the guest flat on a windowsill while I made up a bed there. She was in good health, as far as we know, and being friendly, curious to see what I was doing.

I don't remember if she came in that night. Of all the cats, she's the one who was most likely to stay out at night. I would find her outside my study door in the morning, and she would then come in, have a bite to eat, and sleep on one of the comfortable chairs for most of the morning. However she would sometimes sleep in Tim's room overnight, or on a sofa. Sunday mornings tend to be rushed, and I simply can't recall whether or not I saw her in the morning last week.

We noticed her absence at lunch-time last Sunday, but didn't think much of it. It wasn't until the evening that I became anxious, realising that I hadn't seen her all afternoon. We went outside and called for her, opened all cupboards and balconies and other places she might have got shut in, wandered around the neighbourhood to see if we could hear her calling to be let out of some shed... but nothing.

In some parts of Cyprus, even of Larnaka, cats get poisoned. But in our street there are several cats and dogs. People here seem to like animals - it's one of the many things that drew us to this neighbourhood. We did wonder if Jemima had got run over - but she's always been very nervous of cars, and we haven't seen a run-over cat around here. Any of the neighbours would have told us if they'd found her. We stand out as the only Brits in the street, and our cats are all black or tortoiseshell, unlike the other local ones which are mostly ginger, tabby or white.

We wondered if she was accidentally shut in some building project that was closed on Sunday. We really thought she would appear on Monday - but she didn't.

On Wednesday, in a patch of waste ground not far away, I caught site of a black tail hiding beneath a large fig tree. It's owner hid right in the middle of a thicket as I approached. Perhaps, I thought, Jemima was hurt, or sick, and thus hiding from everyone, even us. But subsequent searching didn't reveal her. It was probably another cat.

We wondered if she had decided to visit our old home, and been shocked that it's now flattened. I'm not sure why she would do that eighteen months after moving, but we were grasping at straws. Cats can apparently find their way 'home' from long distances, and we're only about 2km from where we used to live. Tim went and looked around the site, but there was no sign. Besides, we have friends in that road who would let us know if she did appear.

Yesterday our neighbours over the street here, who have several cats, said that one of theirs went missing around the same time. They think it was stolen. Not for nefarious purposes - there are many stray cats around restaurants and beaches, after all, which could easily be bribed by food to be captured - but because they are 'nice' cats. It seems bizarre to me that a cat-lover would steal a much-loved cat from its home, but then again, cats here don't generally wear collars, and if they were out at night, potential cat-kidnappers might have assumed they were homeless strays. Or possibly abandoned family cats.

It seems unlikely, since Jemima is a private sort of cat who never goes to strangers. But it's the best of the possibilities I can think of. I just hope she isn't shut away somewhere, or suffering in any way. I miss her.

She's not even particularly photogenic, and I didn't take many photos of her this year, but here are a few - just in case anyone in Larnaka happens to catch sight of her.

Here she is on our bed in the early springtime, enjoying a snooze and wishing I would go away with that horrible flash on the camera: 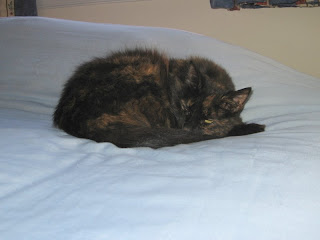 Here she is in April, on the patio of our guest flat, looking at some new plants we had bought: 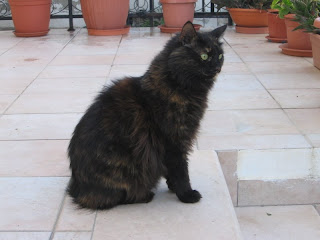 Here she is in the early summer, apparently writing some email at my computer: 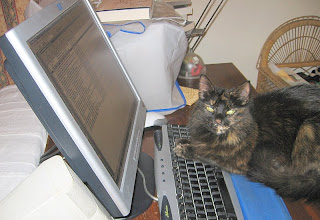 Here she is, again in the summer, deciding that the cabinet with printer paper was a good place to sit: 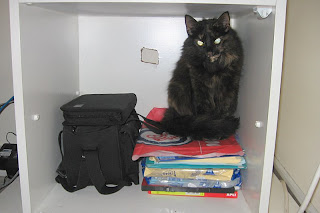 And here's the most recent photo I took of her, just a month ago, on one of our comfortable sitting room chairs. Remarkably unflattering: 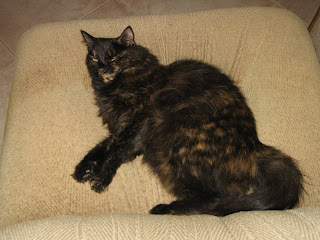 Aw, I hope you find her or she comes home.

It is a terrible thing to lose a pet - hopefully she will turn up. ec

Could you put up 'wanted' photos in the neighbourhood with your phone number on?

Thanks for the good wishes.

Yes, I guess we could put up 'wanted' photos but I'm not sure it would work in Cyprus. And they'd likely blow away or get wet, if we get some rain. Thanks for the thought, though.