Yesterday - Sunday - was my birthday. It was also Daniel's last Sunday in Cyprus, as his furlough ends tomorrow. So we decided we would spend most of they day in the Troodos mountains, one of Dan's favourite places in Cyprus. He had wanted to go when he first got here, but time rushed by...

The boys and I went to church, since Dan needed to say goodbye to various people, and we left Larnaka around 11.30am. The roads were pretty clear, and the way through Limassol is very easy now the flyover system is working. A few years ago it could take half an hour or more to travel a few kilometres between the roundabouts, but now it's just five minutes or so.

We decided to have lunch on the road from Limassol to Troodos. I was sure I had seen several tavernas there, and sure enough we passed some. Unfortunately, most of them looked closed. I suppose they're mainly open during the summer - or perhaps it was too early, since it was only about 12.45 and Cypriots tend to eat lunch around 2pm. Or perhaps, as Tim said, because it's Palm Sunday in the Orthodox Church, people were starting to fast more seriously.

Still, we saw several signs for 'The Waterfall Restaurant' - not very well made, but there were so many of them we decided we might as well find it. And sure enough, we eventually got there. It looked pleasant enough, so we stopped for lunch. 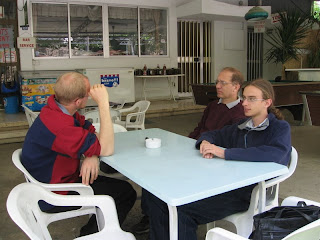 The menu was fairly basic - sandwiches, omelettes, pies and chips - but we didn't want a big meal, so we opted for pies and chips. I thought they would come with salad, but they didn't... and the pastry was a little soggy, but they were pleasant enough, and certainly filled a gap. They were rather expensive for what they were, but then this place is probably meant for tourists.

We didn't go to see the advertised waterfalls next to the café since we'd have had to pay another five euros each, which seemed a little high - about as much as we spent seeing the pyramids last week! - and with the extreme water shortage, we didn't suppose they would be very exciting anyway.

As we drove on, up the winding road, we were a bit shocked to see that vast regions of the forest looked totally burnt: 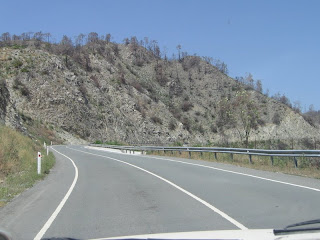 Eventually we remembered hearing about serious fires in the Troodos district last summer. We had not realised there would be so much damage - there were miles of the roadside that looked like that, although we didn't see any damaged buildings. It was a relief to get to the more normal views, albeit not as green as usual: 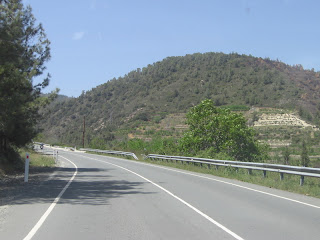 When we finally reached Troodos village, we found it was only a degree or two cooler than Larnaka. But the air felt very pleasantly fresh, and there was a lovely breeze. We parked the car, and went to sit on a park bench.

I had not had time to open my cards and presents before leaving, so we took them with us. I started with Daniel's; he always takes more trouble than anyone I know over his wrapping paper, often creating it himself. This time he made rather geeky wrapping, using white paper and masking tape, with a few labels (click the image to see a bigger version if you can't read the print) : 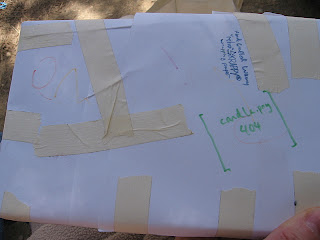 Here's a bigger view of one of the side labels: 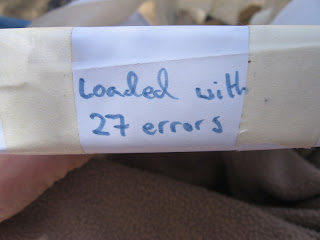 Inside was the newest book by Bill Bryson, which I hadn't even heard of: his biography - The Life and Times of the Thunderbolt Kid

- in which Dan had written, 'Dear Mum, I couldn't remember if you liked Bill Bryson.'

I do indeed, and look forward to reading it!

There were a few other parcels that had arrived: 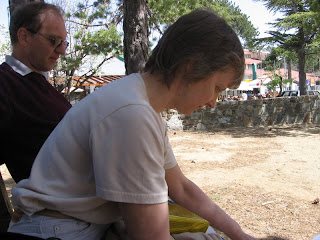 So I opened them, and found some books and a DVD from my wishlist, all of which I shall enjoy. 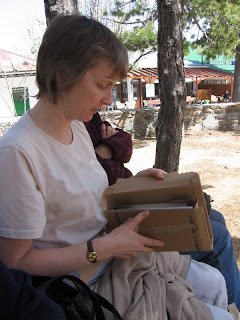 Then I wondered aloud if the swings were suitable for adults... and saw some other adults on some of them. I love swings, so I decided as it was my birthday, I'd have a go: 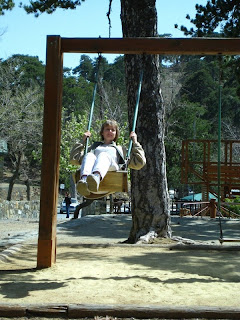 They were very good swings indeed!

After that, we decided to take some family photos - something else we had been thinking of for Dan's entire furlough. I was pleased with this photo I took of the boys: 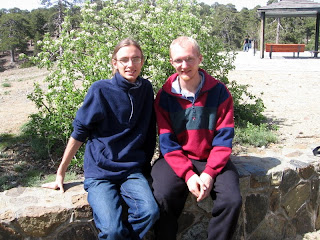 And we set up a tripod, with Daniel's camera on timer - and managed to get several good photos of the whole family, one of which I plan to order prints of: 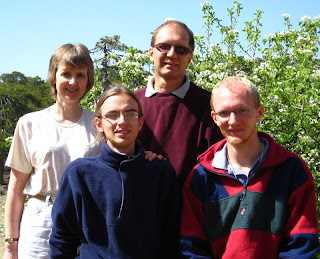 After we'd done that - and Richard took some photos for some other tourists - we found a little café selling ice creams, again at rather high prices, but they were very good. Then Dan and Richard had some coffee, and we read for a while, then went to wander around the tourist shops, which sell a mixture of fairly nice things and tat. At least, three of us did. Tim, who had been out all day Saturday at an island-wide youth sports day, and didn't get back until after 11pm, was exhausted and went to sleep in the car.

Dan bought a few boxes of 'Cyprus delight' to take back to the Doulos, and eventually around 5pm we decided to get back.

In the evening we went out to Aztekas, which is probably our favourite restaurant in Larnaka - it's Mexican, with a good choice of authentic dishes, all offering either meat, chicken or beef filling.

All in all, a very nice day.

Slightly geeky postscript: I am now 48, which seems rather a tidy sort of number. Lots of divisors, and since the month and year are 04-08 it seems particularly appropriate. Oh, and it means I'm now 30 in hexadecimal.
Posted by Sue at 17:34

Hello Sue, Happy belated birthday and great post..You'll love the Bill Bryson book...it's laugh out loud great. I'm sad to hear of the fires last summer and the dryness you're experiencing. Glad to hear of better connections between Larnaka and Limmisol. We're due to return to return to the Troodos mountains/Rocky Point Camp this summer. We were there in '06 and got to know Tim. It's been good to follow him and we wish him well in school next year. It's good to see Daniel too. We've know of the Doulos and it's ministry over the year. Hope to meet you this summer. Suzanne

Happy Birthday. It sounds like you had a great time and it was nice to see your family photos. The weather looks much better in Cyprus than England, surprisingly. (Thunder storms forecast for this afternoon.)

Thanks for the birthday wishes, everyone!

Suzanne - hope to meet you too, if you're around when we are in the summer (mainly August, probably).

Buffy - Cyprus is usually rather warmer than the UK - it's only rarely that the UK has a heatwave while Cyprus is having a chilly spell.

Sue, I love your swing picture - the perfect way to stay young at heart!
Inspires me to go and find a decent playground to run around in, hehe

The weather in Cyprus is by far better than in England. At current the tempreture in England is 18oC and in Cyprus it is 28oC.