Last night was Daniel's last evening in Larnaka for (probably) at least two years. Tim said he would cook, and Dan suggested they make some Korean style food, which he's enjoyed eating on his travels on the MV Doulos. So Dan directed operations and made a chili-tomato sauce and washed salads, while Tim made an 'omelettish thing', and some chicken coated in soya sauce, and fried halloumi, and boiled some rice, and also made some of our favourite Mediterranean style roast veggies.

Dan was worried it might not be enough, but I think we could easily have fed at least two more people by the time it was all ready: 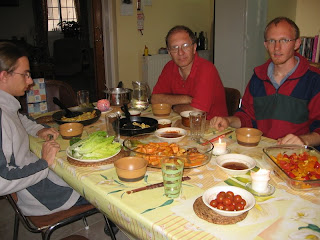 Daniel explained how to take a piece of lettuce, and then add some rice (using chopsticks) and other pieces of food, dipped in a sauce: 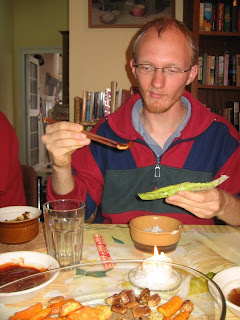 Then you're supposed to wrap it in a parcel and eat with fingers. Tim and I both gave up and started using forks after a while, but it was all very tasty. When we'd eaten what we could, we froze some of the leftovers for another day.

Then we played a couple of rounds of mah-jong, one of the family favourite games which needs four players. We hadn't played it since Daniel got back three months ago. 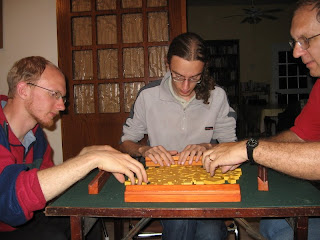 This morning, Daniel's flight out of Cyprus was at ten past ten, a very sociable time. So he had to be at the airport shortly after 8am. It was a pleasant day, quite sunny but not too hot as we arrived. He doesn't have as much luggage as he did when he first left, two years ago: 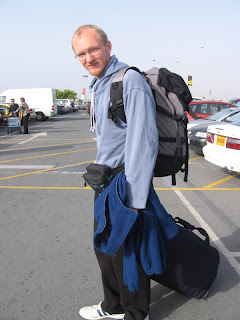 I also realised that I've got much more used to digital photography since then. Instead of taking two or three careful photos, thinking about prints, I take dozens and then select a few. Here's Dan heading towards Larnaka airport, pretty confident about travelling these days: 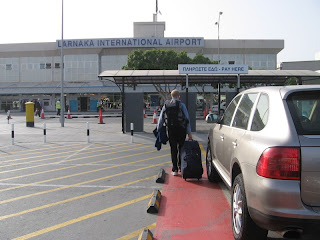 And here he is just inside. It wasn't too crowded at all, and although there was a huge queue for Cyprus Air flights, they were managing them very efficiently, and we only had to wait about five minutes before he was checked in. 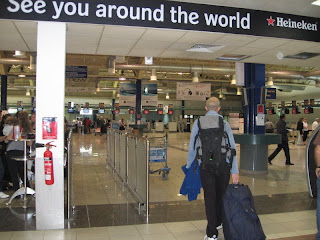 So we went and sat in the outdoor part of the restaurant outside for a while. None of us wanted anything to eat or drink, so we hung out for a while... we watched a woman hosing down the floor, which was a bit shocking considering how very low the water supplies are in Cyprus. She didn't wash the part where we were sitting, but left the hosepipe running, so the water started running around our feet. 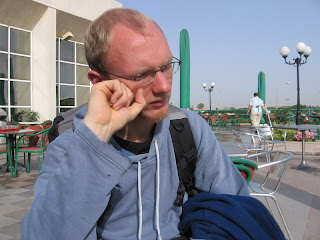 So, around 9.15 we headed back inside, and said our goodbyes. I thought it would be a lot easier this time - we've done it before, and Dan's flying to England for a couple of months to start with (to Carlisle where he's doing some audio-visual/media training and work). I haven't felt so tearful in the past week - not more than the odd moment - but I still found myself crying as we hugged him once more, and said goodbye. I wonder if it will ever get any easier.

I don't know if we'll be able to go and visit him again; two years seems such a long time. I'm very thankful for email and instant messaging and mobile phones, which at least mean we can stay in touch. I have no idea how parents coped in previous decades, when leaving for another country meant no communication for months at a time.
Posted by Sue at 16:16

Althegal left home about ten years ago, but I still get a little misty-eyed when we say goodbye.