I'm not sure exactly when the building work started, in Larnaka Town Centre. Well, not exactly the centre of the town, but the focal point: near St Lazarus Church and the fort. I walk down there most Mondays, to collect mail from our PO Box; it's about a mile away from where we live. So you would think I would have noticed when the major road-digging began.

However, there are a lot of roadworks in Cyprus. Drains are being installed, slowly, as per EU regulations. Cables frequently get laid down. And roads need re-surfacing pretty often, probably due to the long, dry summers. So we barely notice when a stretch of road is cordoned off, and there are obvious road works going on.

But I do remember that this major work started at least six months ago. According to a friend, a pedestrianised area is being built, so that people can sit outside and drink coffee, with St Lazarus Church in view. It's apparently been planned for about fifteen years, but kept being blocked for various reasons. And even when it started, it didn't seem to be progressing terribly fast. For several months there were diggers and a large hole, and then we saw new drainpipes appearing.

Last night, we went out for a meal with some friends. We parked near the Post Office, and then walked the last 100 metres or so to the sea front. The non-accessible area had changed, and most of the large holes appeared to have been filled in. Instead, we saw this: 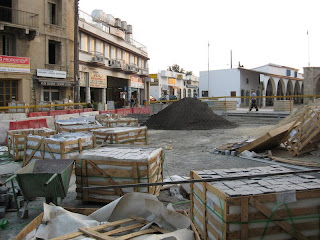 - those piles of bricks are, we assume, for more pedestrian surfaces. They've already done some: 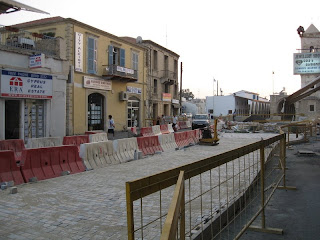 .. although we can't yet walk on this area.

There are also big changes at the seafront itself. Some of the restaurants near the fort had put up extra buildings along the beach itself, which had operated for many years. But apparently they were illegal, and have now been pulled down. We're not entirely sure what's going to go in their places, but the seafront road is being re-surfaced, and the restaurants on the other side of the road now have a much better view of the sea. 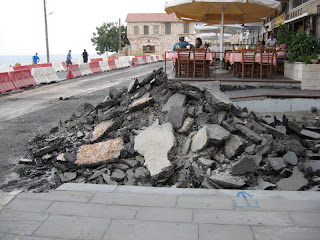 My name is Claire. I found your blog online today and I would like to invite you to list it on our Expat Women Blog Directory (www.expatwomen.com/expatblog). It’s free. We would just love to have your blog listed on our site!

I also invite you to join our ExpatWomen.com community (www.expatwomen.com/sign_up.php). Membership is free and enables you to receive our monthly, inspirational newsletter, plus ensures your name is in the running for all of our ExpatWomen.com promotions and giveaways.

Thank you very much and my very best wishes to you,

thanks Sue for the pics and jogging my memory about walks in '06 around the Lazarus Church. We didn't get there this year.
You continue to inspire me and I invite you to visit my blog.
It is www.finishingwellaquestionorstatement.blogspot.com/