Cyprus meze at a local taverna, and some Scrabble

Last night, we were taken out to eat at a local taverna by some new friends. After perusing the menu, we decided to opt for meze (pronounced something like MEZ-ay). This is a Cyprus speciality, consisting of about 15 or more different items, brought to the table a few at a time. It usually starts with salads, then small pieces of different sorts of meat, vegetables, the ubiquitous chips (aka french fries), pasta and cheese, and more.

We knew, from previous experience, that meze meals tend to be HUGE. So suggested that we just order two mezes rather than four. This was fine with the waiter - he said that we could always ask for extra individual dishes if we wanted more.

The food was excellent, and as we expected, it kept coming. Even with just meze for two, we couldn't manage it all. 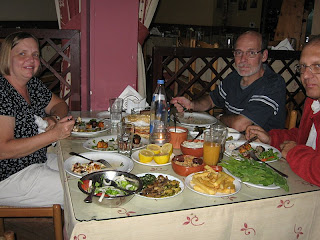 Afterwards we went to our friends' apartment to play Scrabble. I have recently been playing a lot of Scrabble on Facebook, where of course there's a button to check whether or not words are valid. Moreover, it's possible to try out several possible moves to check what the scores would be, and there's usually at least 24 hours to think about each move, if one wishes to.

Richard hadn't played for a couple of months. And for some reason, he confused it with Rummikub at first. He was supposed to start... he glanced at his hand, said he couldn't go, and picked up another tile from the bag!

I pointed out that he didn't need to make thirty points, he just needed to make a word of some sort over the centre pink square. So he did something I have never seen before: 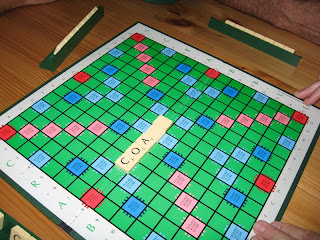 Yes, he had both blanks in his initial hand, and used them both in his opening move!
Posted by Sue at 17:43

If you like Scrabble you really ought to come to porkies barn.