Eleven years since we arrived in Cyprus

October 26th was a Sunday back in 1997 too, when we travelled to Cyprus as a family for the first time. I was incredibly stressed. I really didn't want to leave our reasonably comfortable home and lifestyle in Birmingham, and the whole process of packing up the house, and deciding what to take was something of a nightmare.

I didn't have a blog back in those days - I don't think they even existed - but I did keep a journal of sorts, and then transferred the contents to our family website - you can read my thoughts and feelings of the time from October 1997 on the RSDT site which still exists, even though I no longer write on it.

We only came for two years, initially. I was going to educate the boys at home, in accordance with the National Curriculum of the UK, for up to nine months before putting them in school. And I was quite sure I would never get used to the heat, or putting toilet paper in bins rather than down the loo, or the mosquitoes.

And here we are, eleven years later. We sold our house in the UK in July 2006, and bought one here. The boys never did go to school; they were home educated until they were eighteen. Far from being socially isolated or backward in any way, Daniel (now 22) is currently living in a community of 350 on the MV Doulos, working as the audio-visual manager. Tim (20) is in his first year at Newman University in the UK, and already has two part-time jobs as piano accompanist to choirs.

We got so used to the toilet paper bins that it's a bit of a surprise not to find any when we're in the UK. We got used to mosquiotes, too. I'm pretty good at catching and killing them in my hand, even - bizarrely - at night, when I apparently manage to get them by sound alone. We no longer react to their bites; they don't even itch any more, but the bzzzz at night is a bit irritating. We have an ultra-violet zapper that gets rid of most of them before they get to the bedroom.

Most surprising of all, at least to me, is that we've acclimatised somewhat to the heat. I suppose it's about 25C today, but rather than feeling hot, it feels very pleasant. There's a breeze coming in my french windows at present, which is almost cool. Not cool enough to put on a sweatshirt, but we're using a thin duvet at night, and I've put away my shorts for the winter.

The day we arrived eleven years ago was the day when the clocks went back in Europe, just like it was today. But whereas this year I could enjoy the extra hour in the morning, I hardly noticed it back in 1997 when we had to change time-zone anyway.

For years, Birmingham felt like home. But since we moved to our own house, Cyprus feels like home at last. Most of the time, anyway.

Here's what our first (rented) house in Cyprus looked like shortly after we moved in. We were only supposed to be able to have it for two years - in the end we were there for nearly nine. 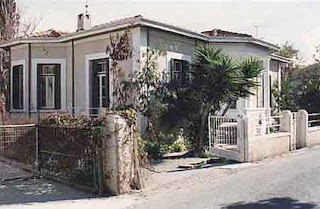 Here's what we looked like in the summer of 1997, shortly before we flew to Cyprus: 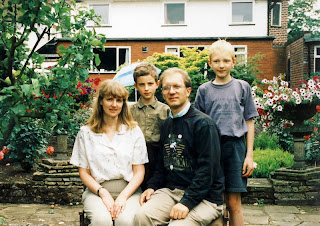 ... and here's how we look now - taken in April this year, the last time we were all together for a while: 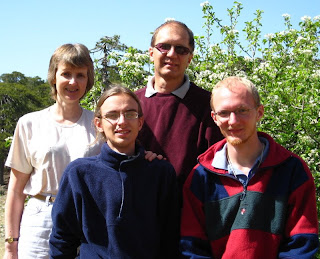 For once some nice Cyprus History. Keep it up

And I remember how when you were in Colorado Springs you gave us your British reactions to US culture on the BBS conferences.

I still remember Richard's response to a US minister saying that parents should not allow their boys to play "girly" games like soccer, and should rather encourage them to play manly games like netba... I mean basketball.

Sue...I'm catching up on several of your blogs....these are great...Tks. so much..fun pictures. You help keep Cyprus memories very alive for us!