Today, a friend and I did the Larnaka Walk.

No, it's not a Cyprus version of Monty Python, or even a slow barn dance. It's a guided tour around part of Larnaka town, offered every Wednesday at 10am, free, by the Cyprus Tourist Organisation.

I did this with one of our guests some years ago, but apparently it's a bit different every time, depending on the guide. I know Larnaka fairly well now, of course, after eleven years, but I thought it would be interesting to do again.

The tour starts at the CTO office, where we had an introduction, then we walked a few metres to Europe square, where the fountain was playing: 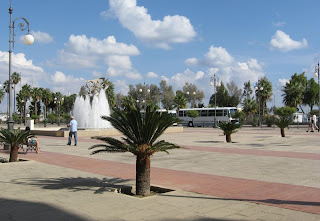 Then we saw the various old buildings which now house museums and art galleries: 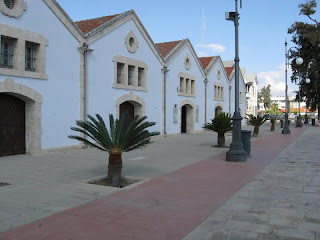 We were given a lengthy explanation about the Cyprus problem, then walked a little way along the Finikoudes sea-front to see the statue of General Kimoni, who died at the beginning of an important battle, but his troops didn't know, so went ahead and won: 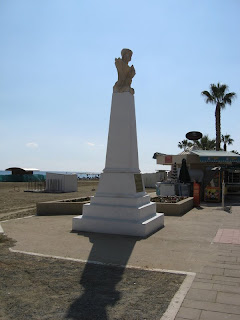 We walked past the stage where the concerts and dancing take place during the Kataklysmos Fair in May or June: 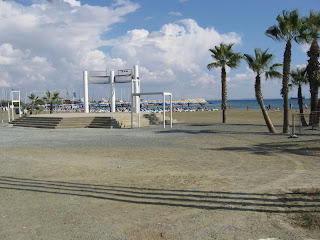 Then we walked down one of the side-streets, and saw an old-style house with a covered balcony: 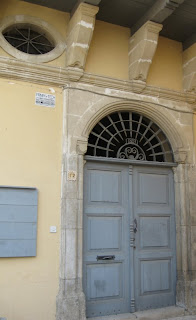 I didn't take any more photos after that. We walked to the market area, and into a candle-maker's shop area, then past some of the chair-makers and other local craftsmen.

I knew it was all there; I knew most of the history we heard... but it was still an interesting morning.

I was surprisingly tired this afternoon. It was a twenty minute walk to the town, and another twenty home... I think it was the two hours of the tour that were really tiring, though, as we walked fairly slowly and there was quite a bit of standing still listening, which somehow is much more exhausting than brisk walking.

The CTO also do a tour around the potteries in the Skala area, on Friday mornings, but I don't think I'll be doing that one again. Not for a while, anyway.
Posted by Sue at 18:42

The walk looks great...I love musical fountains...wish I was there with you.

Oh, a language confusion there! It's not a musical fountain, just a regular one. When I said it was 'playing' I just meant that it was going... switched on... not sure what other word to use! Sometimes there's no fountain going, hence why I mentioned it.