A year ago today, Richard celebrated his 50th birthday, and Daniel his 21st. Since Daniel couldn't get back for the occasion, the rest of us had a holiday in Malaysia, so they could celebrate together.

Another year has rolled around. Tim has now left home, too. So, for the first time in twenty-three years, Richard and I are alone for his birthday. He said he didn't want to do anything special, or go out anywhere. Fifty-one is a strange kind of number; the card sent by my sister caught the mood perfectly: 'Another birthday? Weren't you old enough last year??'

I don't remember what we used to do about birthdays in the BC* years. He couldn't think of anything he wanted as a gift, either, so I resorted to buying some books from his Amazon wishlist.

I said I'd make a cake - perhaps even two cakes, so he could take one into the office in the morning, and have the other at home. And then I realised a further problem: I haven't made a birthday cake in years! Tim has been our family cake-maker for at least four or five years - perhaps longer.

In Cyprus, the regular self-raising flour really doesn't work. So, on the recommendation of friends, we've been buying pricier brands, recognisable from the UK.

However, I hadn't used any self-raising flour for at least three months. And when I had a look at it yesterday, even though it was in a plastic container with a sealed lid, it was crawling with flour bugs - something that happens fairly often in Cyprus. When I popped out yesterday to our local Orpanides Express for a few bits and pieces, the only self-raising flour they had was the local version.

So I decided to use plain flour and baking powder. I guessed at the quantities, using two 17-cm tins. I just made a basic sponge recipe with added cocoa powder (the one known as 'pound cake' in the USA, although I only used 160g each of flour, margarine and sugar to go with three eggs).

They rose beautifully, but I made the mistake of opening the oven too early, and both cakes sank in the middle. Ah well. I filled the middle with apricot jam, and made a basic plain chocolate icing for the top, and then arranged some chocolate chips on top. It didn't look too bad: 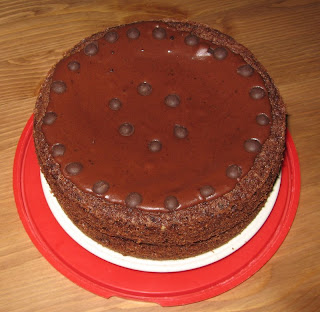 Apparently it tasted reasonable, too. Perhaps some of it will come home this evening. I made Delia's chocolate coconut slices for the lunch-time cake.

This evening we're going to have a quiet meal on our own, and then watch the DVD of 'Parenthood' - which I suppose is appropriate, since it's the 22nd anniversary of the day we embarked on that state.

In the morning, after Richard opened the various parcels and cards awaiting him, we phoned Daniel. There's a satellite link to the Doulos now, so the number we have to call is in the USA, even though he's actually in Australia.

I hadn't thought Dan would have anything to open; I'd sent him a parcel from Amazon about two months ago, and some small packages with chocolate and fruity tea bags every two or three weeks. None of them had arrived last time I saw him on Instant Messenger, but apparently there was a lot of mail yesterday, and they all arrived. Along with a couple of other parcels from relatives, which he was pleased with.

Daniel had asked us to phone before 10am our time, because he was scheduled to do the long afternoon and evening shift for the audio-visual team today.

The reason he was doing this long shift on his birthday was that the person doing the scheduling had forgotten that it was his birthday. This would not have been surprising, perhaps... except that Daniel himself is the person who does the A/V scheduling now.

Perhaps he, too, is feeling that he was old enough last year!

Congratulations to your Richard and Daniel....my time does fly...quiet birthdays are nice.