We very much enjoyed having our friends Brian and Ruth to stay for a week in our guest flat, with their youngest son. We hadn't seen them for about fourteen years, so it was great to catch up, and hang out together. They rented a car for three days and went out to see some of Cyprus a little further afield than Larnaka; they also managed to get to the beach every day while they were here.

The time rushed by, and all too quickly they had to pack up again and say goodbye: 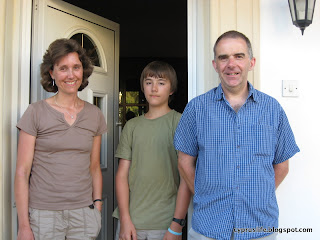 Richard took them to the airport. Richard was sporting a new bi-coloured face style, apparently developed on Friday when teaching some friends' children to sail. He was wearing a hat, standing in the sea for some time. He did have sunscreen on his face, but apparently not quite enough to keep him from catching the sun. If the line on his forehead isn't clear from this small picture, you can click on it to see a larger version (as you can with all the photos on this blog). 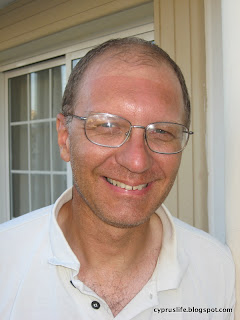 Richard's colleague John is here, staying in the office guest flat. We learned a few days previously that he's a great fan of Settlers of Catan, so our friends Jörn and Sheila invited us all over for a meal and game in the evening: 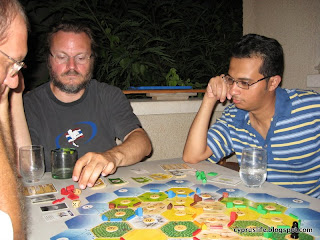 We have played often enough that we have got used to the same colours for each game. Jörn is blue, and he won this game. Sheila is always brown. Richard is always red, which is his favourite colour, and I - for some reason - am always orange. John was green in this game, and at one point it looked as though he would win. 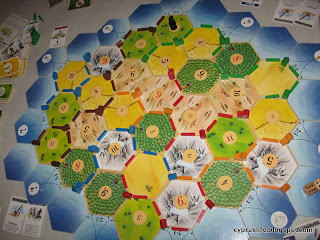 Playing with five people means we use the 5-6 player extension, which makes it more interesting. We play to 12 points. It was a close game, right to the end. Jörn had his 12 points on the board, which is impressive. John, obviously, had the longest street card, and also had victory point card, so he had 11 points and was very close to winning. I had played four knights, so I had the largest army, meaning 10 points in all. Sheila had 9 points on the board, Richard had 8... but at one point, we all had either 7 or 8 points, so it wasn't until near the end that we had any idea who would win.
Posted by Sue at 16:18