A non-typical Saturday on a hot Cyprus day...

Yesterday was what might be called an interesting day. One that I hope will not be repeated any time soon. I didn't get to bed until about 11.45pm, which is long past my usual bedtime. When I got up this morning, the house was not as tidy as I would have liked it to be...

Here are some clues to what happened yesterday: 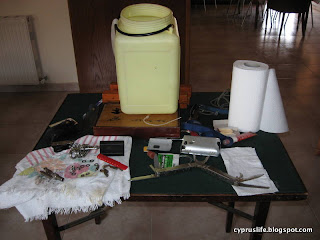 Yes, that's our rather rickety old card table. Our mah-jong set is there, near the back. On top is a plastic box, supposedly waterproof. There's a roll of kitchen towel, too. And several other apparently random bits and pieces. To see a little closer: 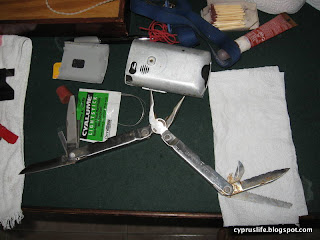 Yes, that's the outer protective casing of a phone. A multi-tool thing. Some sunblock lip gel. Some matches in a soggy box. 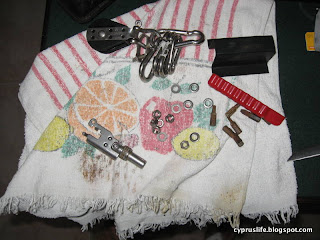 .. and here is an old tea-towel, with various bits of metal and some mini drill bits.

Going into the kitchen, you would see this: 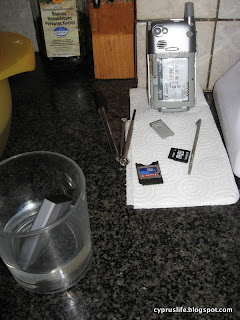 Yes, that's the inner part of a phone, standing on end. Another part of the phone (I think...) in a glass of water.

Then there's a radio, sitting in one of my mixing bowls: 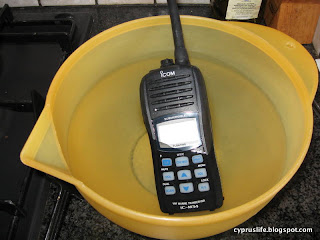 .. while on the draining board sits an empty slow-cooker (crockpot) inside pot: 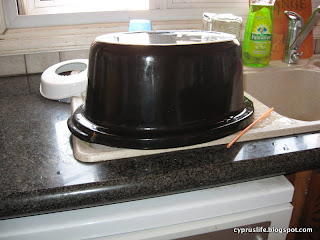 Back to the living room, there's a mysterious looking black plastic rolled up item on the sofa, with a ruler behind it, and a small white towel draped neatly over the arm: 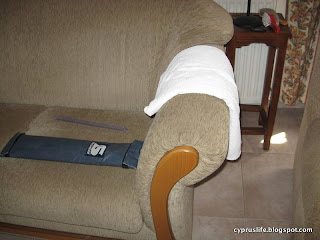 On the coffee table, are three children's books, a long piece of lego, and a toy from McDonalds left behind by one of our visitors: 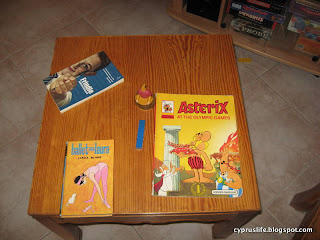 In my study, there were several lego models lying around the floor, but I tidied those away before I thought of taking photos, and although I considered getting them out again, I decided it wasn't really worth the effort.

Oh, and if you happen to look outside our kitchen, to the utility balcony, you would see, in addition to regular items such as a double sheet, an empty picnic cool-bag, and - perhaps most mysterious of all - a very small pair of pink panties: 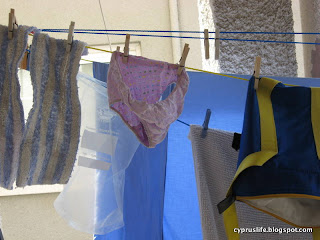 I'm tempted to stop right there, and see if anyone can guess what happened yesterday.

Short story: Richard took three people sailing. I spent part of the morning preparing an evening meal for ten, including the four who were sailing. Five of the other people expected to dinner spent the afternoon with me. After the meal, when most of our guests had gone home, four of us played a few games of mah-jong (hence the late night).

That explains the crockpot, the card table and the mah-jong. And, given that four of the people who spent the afternoon with me were children, it also explains the lego and the children's books.

Those were the expected parts of the day.

It's said, sometimes, that accidents come in threes.

About 5pm, our youngest guest (aged 11 months) managed to spill a half-empty glass of water on the floor. A minor irritation at most.

In fact, we barely noticed the spilt water, because a couple of minutes earlier, her just-four-year-old sister had an accident of the type that small children occasionally do (though it's very rare for this particular little girl). That resulted in a different kind of liquid on the study floor, where she was just going out in an attempt - perhaps - to get to the loo. The children had just watched 'Pollyanna' on DVD, so her mother and I reminded ourselves that there was much to be thankful for: we were glad, for instance, that she was not sitting on the sofa at the time, and that we don't have carpets.

Thus the towel (since a shower was required) and the little pink panties on the line. I managed to find a very old pair of one of my son's underpants which, with the aid of a safety pin, sufficed for a few hours.

As the children's mother was mopping up the mess, the phone rang. It was Richard, letting me know that they were going to be later than expected... because his boat had capsized. For the first time ever. It was quite windy yesterday, but no worse than the week before. He didn't want to tell me about it on the phone... but assured me that everyone was fine, and had been rescued.

And rather than give the details here, anyone who wants to know exactly what happened can read Richard's official Mayday report, which he posted on his Wayfarer blog.

In a nutshell: the 10-year-old child he took with him was brilliant. He remembered all his training, didn't panic, and behaved impeccably. His father was fine, but tired, and having problems with his blood sugar. And the father's friend was - well, let's just say he was not fine. He didn't listen to instructions, he kept asking where he was supposed to go when told to change sides of the boat (as if there are a lot of places one CAN go in a smallish boat with four people on it!) and when the boat started to tip, he not only hadn't moved when he was supposed to, but didn't think to throw himself to the other side to stop it going over.

Everyone was rescued pretty quickly. The life-jackets (technically buoyancy aids) did their job, the water in Cyprus in August is warm enough that nobody was going to suffer hypothermia, and the masthead buoyancy thing (that black plastic object, which is explained on Richard's blog post) pushed the boat to horizontal rather than totally upside down in the water.

The boat was recovered, as were the items tied down in it including the blue cool-box which had contained Richard's lunch, and the yellow 'dry box' which unfortunately was not as dry as it should have been. Possibly the lid was not on firmly enough. Whatever the reason, Richard's phone has clearly suffered and he has no idea if it will live again. He's currently using my phone with his sim card (which is still working).

Unfortunately, the camera Richard takes with him, and its waterproof case, had not been tied to the boat because of a previous incident earlier in the day. And the two adults had, for some reason, taken wallets with them but had not put them in the dry box, so they too are missing, along with their car keys. And shoes, which they had taken off.

There is some damage to the boat, which we hope is minor, and apparently some items have been salvaged by both the Larnaka and Dhekelia sailing clubs. So Richard and one of his regular sailing friends have gone out to see what they can find, and discover exactly what damage the boat has sustained.

The most important thing is that everyone is unhurt.

But I hope to return to my usual unexciting Saturdays in future!
Posted by Sue at 14:53

you tell a wonderful story
thanks for that
i bet the 4 year old was hanging on till the end of the dvd ... !

Wow what a day. We enjoyed Richards account of the day. Thankful all are safe!