After a cold few days in Cyprus at the end of January and beginning of February (cold enough that on a couple of mornings we heard of people having to scrape ice off their cars if they were up early) and a few very wet days at the start of last week, it's suddenly become warmer. It almost feels as if Spring might be around the corner, although I know that March can also be very chilly in Cyprus.

On Friday morning, in the early hours, some of our friends who had been away for six weeks returned to Larnaka. On Saturday I had a text saying they were going out for a walk in the Salt Lake Park, and wondering if I'd like to join them. I had an hour available in between various things in the kitchen, so I grabbed my camera, decided against a jacket, and went out. It was just Sheila and the three youngest children, so we didn't walk particularly fast or far. The day was grey, but really quite pleasantly warm - around 18C, I believe.

Lukas insisted on taking an umbrella, although we didn't need it. I hadn't been near the Salt Lake for a while, so we were all surprised to see how very full it was looking: 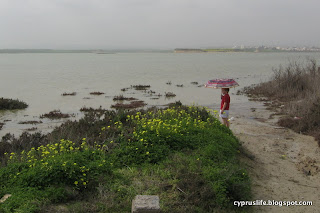 There were flamingoes - lots of them - in the middle of the lake. Even with my camera on full zoom it was hard to see much - and the day being grey, the colour doesn't show at all. But this is what we saw: 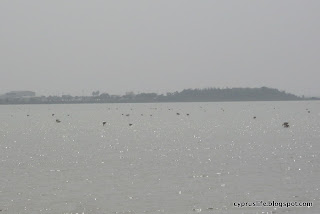 You can click the image to see a bigger version, where it's possible to see that the blobs on the water really are flamingoes!

I was more interested in chatting with my friends than remembering to take photos of the extensive greenery that usually follows heavy rains during a Cyprus winter. But this photo shows how tall the weeds are, and how some of the yellow flowers have already started appearing: 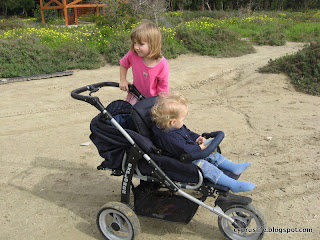 Great to see the salt lake so full, and the flamingoes back

The next ones will be the huge bushy things which I have no idea of the name of but grow pretty much everywhere around the eastern coast and have little yellow buds on them ready to pop open anytime. lovely to see compared to the dry brown barren landscape we'll see in a few months.