Daniel's mailbag of books arrived in Cyprus at last

Long ago, in the annals of history, when Daniel was still on the MV Doulos - well, three months ago, anyway - he was online, chatting about the vast amount of luggage he was going to have to take with him when he flew to Carlisle. He had at least 100 books, none of which he wanted to leave behind, but thought he might need at least one or two items of clothing. And of course he had his clarinets, and his guitar, and his computer, and various CDs, and his espresso maker...

'So, why not send the books via mailbag?' I suggested. And then had a look at the Singapore Post Office online, learning that he could, indeed, send out parcels of books and other printed papers at a very reasonable rate. They would take 2-3 months to arrive at their destination, but the cost would be FAR less than taking as excess baggage, or shipping via other methods.

He liked the idea so much that he made arrangements for other Douloids to do this too. And in the midst of rushing around packing and helping to take apart the furnishings of the ship, he managed to stagger to the Post Office with 20kg books to send back to Larnaka.

I'd almost forgotten about it, until he asked me in an email, recently, if it had yet arrived. It hadn't... but I was very glad he had reminded me. When I went to collect our mail on Tuesday, there was a little slip saying that there was a parcel awaiting us, too big for the box. I nearly went in to ask for it, noticing just in time that rather than 'small packet' the postmistress had ticked the box for 'mailbag'.

So I told Richard about it that evening, and on Wednesday morning we drove as close as we could to the Post Office. I'm very glad I didn't try to take it anywhere. It was a large and somewhat battered bag that took up quite a bit of space in the back of the car: 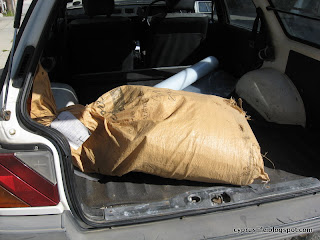 When we got home, I suggested unpacking it there and then, so we could carry armfuls of books up our stairs. But Richard said he could manage the whole thing: 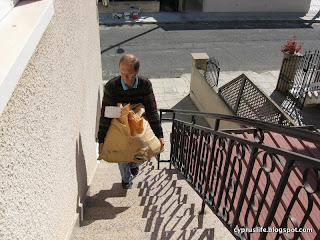 The bag really wasn't in good condition at all, but then it had been sitting around in ships for the past three months. There was a hole near the bottom, although all that we could see was cardboard, so I don't think anything had fallen out: 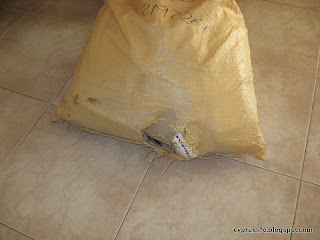 Apparently Daniel had packed all his books in one large box, which had pretty much fallen to pieces by the time it arrived. So Richard pulled out all the books first, then we had a look at the box, assisted by Sophia, who thought it smelled VERY interesting: 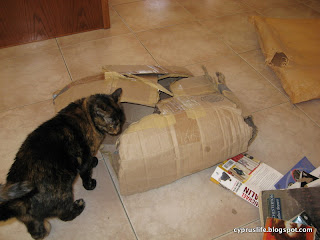 When I asked him why the books were all in one box, he said they were only allowed one box per mailbag. And yes, he realised he should probably have packed three smaller boxes inside the large one, but since the majority of the ship's company were sending out similar mailbags of books, boxes were in rather short supply at the time.

I don't know if it was 100 books, but it made quite a pile on our coffee table: 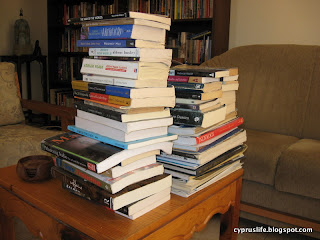 It was a nicely eclectic mixture, from Augustine to Adrian Plass, from Shakespeare to Terry Pratchett. Rather typical of our household, in fact. And a fairly large amount of clarinet music, too.

The mailbag itself provided some entertainment for the cats. Cleo loves boxes and enclosed spaces of any kind. Sophia was clearly fascinated by the scents. Daniel was her 'person' - almost exclusively - so it's entirely possible she could smell him somewhere around. She kept rushing to the front door and looking outside before returning to the box and bag, until I finally squashed them up and threw them out. 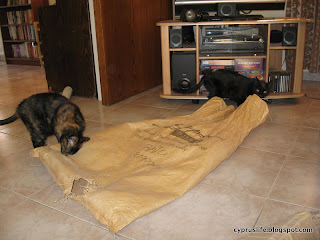 None of the books was actually destroyed, but several of them looked distinctly battered: 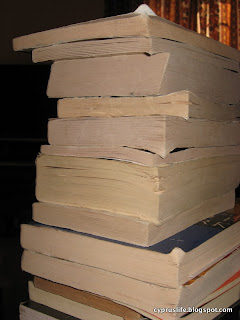 I hope they'll all still be readable, anyway. 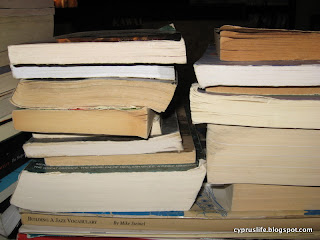 The next question was where to put them, since they couldn't sit on our coffee table indefinitely. Nor did I want them to fade into our subconsciousness and stay there unnoticed, so I thought I'd better find a home for them immediately.

The bookcases in Daniel's room are already fairly well packed with books. Some from his teenage years, some are already retrieved from his time on the Doulos from his furlough two years ago, and even a few brought back by us from our visits: 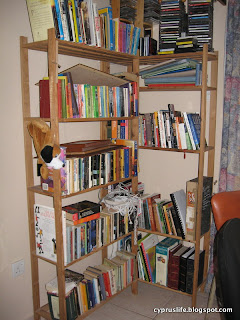 So I cleared a bit of space on the bookshelves built into the end of his bed, and put them there: 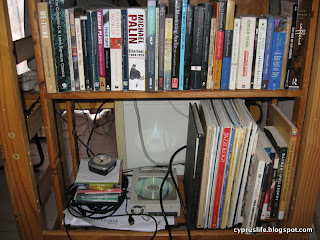 good job mom.....I know Danial appreciates all your help....It's too bad the cost of so high in mailing between countries. We just mailed off 55 pair of used eyeglasses, some with cases, to Cyprus. The cost went from $200.00+ down to $58.00. It definitely pays to look around.

What a wonderful bunch of books. I love books but I also want to get some new ones. I have an awful lot of them so I separated the ones I know I want to keep and they turned out to be only a few. Then I started reading what was left, actually I hadn't read a lot of them, and they are going as fast as I read them to our church library. They are all Christian books.
It's quite a chore but I do love books and it is the only way I know to separate them!!!
Best to you and yours,
Betty G

What a wonderful bunch of books. I love books but I also want to get some new ones. I have an awful lot of them so I separated the ones I know I want to keep and they turned out to be only a few. Then I started reading what was left, actually I hadn't read a lot of them, and they are going as fast as I read them to our church library. They are all Christian books.
It's quite a chore but I do love books and it is the only way I know to separate them!!!
Best to you and yours,
Betty G