Cleo is our mostly black, still not entirely domesticated panther-like Cyprus cat. She's about 12 years old now, so she isn't quite as active as she used to be. Then again, now summer is approaching, she's a lot livelier than she tends to be in the cooler months.

Cleo has always liked to take naps in unusual places. The top of a bookcase - preferably a tall one - is so common that we barely notice it any more. I sometimes see her stalking around on neighbouring flat roofs, too. It worried us when she first started sitting outside on the exterior air conditioner units - but she hasn't yet fallen off, even when having a wash, and seems to like surveying the neighbourhood from a position of safety: 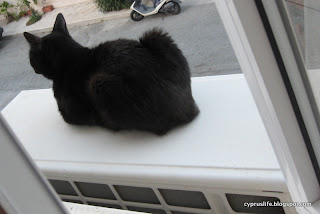 She likes radiators for their warmth in the winter, and as a place to sit in the summer: 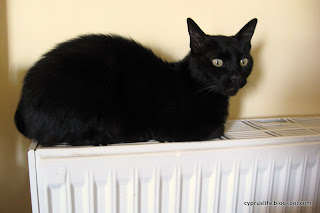 But this year she seems to have discovered several new places to sleep, or at least to rest. This one probably doesn't look too unusual: 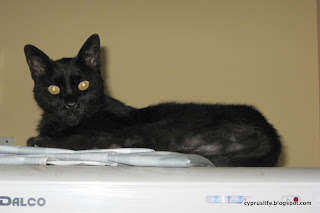 - until you realise that she's actually on the top of our tall freezer: 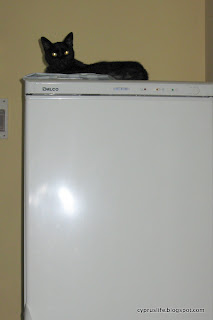 This one is very weird - she likes to sit in the sink of our outside utility area: 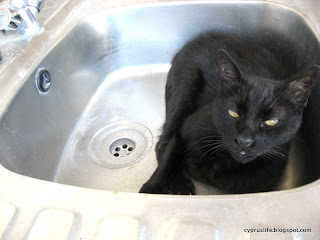 She's always liked squashing herself into boxes, so we shouldn't have been surprised when we left a game, just started, and returned to find her in one of the lids: 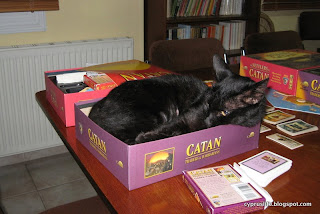 - here's a close-up; I wonder if she deliberately chose the lid labelled 'Traders and Barbarians' rather than the regular CAT-an game: 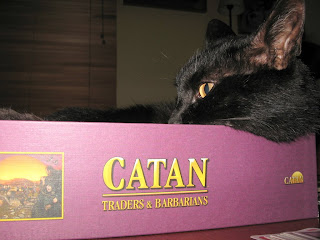 And here's her most recent spot for a nap: Daniel's electric guitar case: 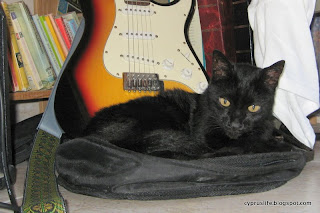