A few hours in Nicosia, crossing the border at Ledra Street

Becky hadn't been to Nicosia, and Daniel - who had been there, many times, during his teens - wanted to walk down Ledra Street, the border to the North that was opened to the public back in the spring of 2008. So as Thursday was forecast to be a sunny day - for a change - and we had nothing else happening, we drove up to Nicosia late morning.

We didn't take a map, but Daniel and Richard both have a great sense of direction, and we soon arrived at Ledra Street, which is a fairly typical small pedestrianised road full of shops. I was a little surprised to see a Peacocks store - I almost forgot that we were in Cyprus: 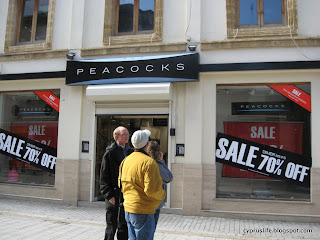 And of course we sighed when we saw the ubiquitous Starbucks and McDonalds: 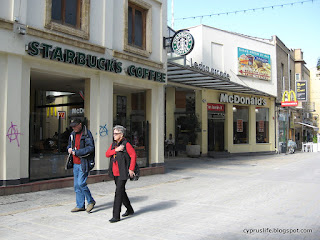 Still, the clear blue skies, fruting orange trees and occasional Greek shop names did remind us that we were, in fact, in Nicosia: 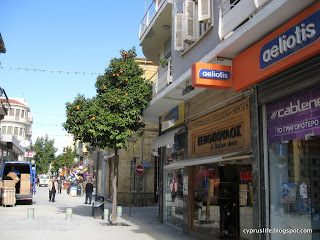 I think something must have got lost in translation with this shop, 'Pull and Bear': 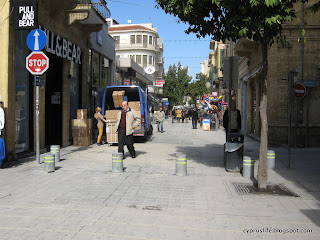 At last we reached the area which used to be boarded up, with armed guards ensuring nobody crossed. It didn't exactly look very enticing: 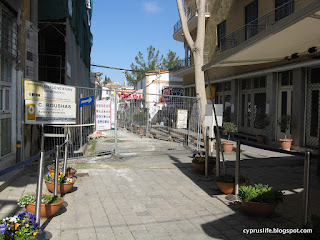 We had to take our passports to some rather bored looking officers in booths, and get our free visas which are on separate pieces of paper. Fortunately we didn't have any counterfeit or pirated goods with us... 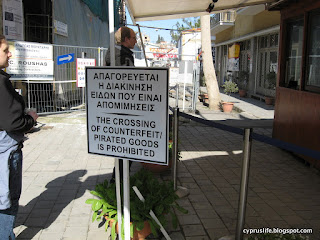 Just in case we had any doubt as to where we were, this helpful sign reassured us: 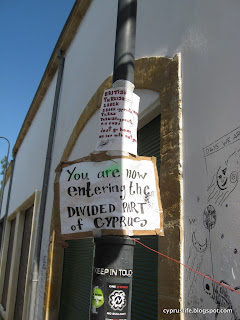 There was a great deal of graffiti, random signs, and 'occupy buffer zone' posters in the short area between the South and the North: 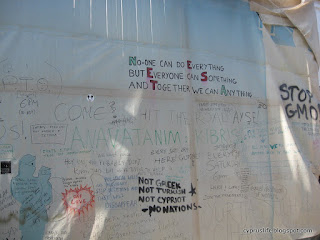 At first, things didn't look too different in the North - there were jewellery shops galore, a surprising book shop full of old hardback British books (and some others) and a coffee shop, the only difference, of course, being that signs were in Turkish rather than Greek: 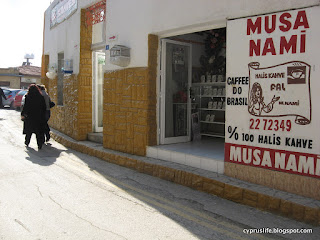 However it all quickly started looking rather run down and generally unkept. Not really a good way to entice tourists to explore and spend money. We wondered about having lunch somewhere in the North, but didn't see anywhere particularly appealing. 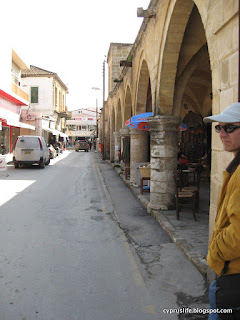 At least the sun came out again, for a while: 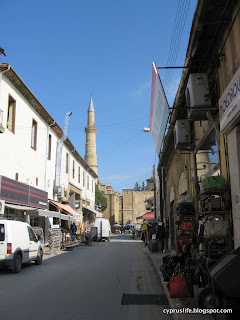 We didn't really have any planned route - we wandered around, and came across a church that was being restored, slightly to our surprise: 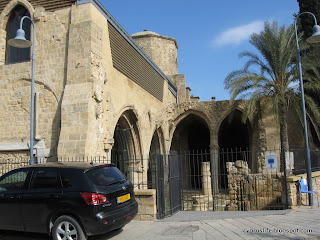 By this time I was feeling distinctly hungry... only to discover that we were lost. Richard and Daniel did manage to take us in the direction of the border, but of course there are only a few places where it can be crossed. Cyprus mobile phones don't work in the North, so Richard could not use his GPS, but we managed to find a useful sign: 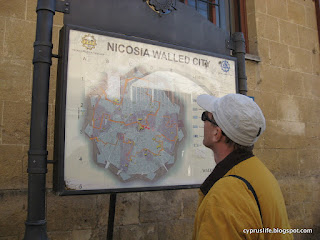 Well... it wasn't that useful; we found ourselves in a covered market, with no way out, and had to retrace our steps. But eventually we found ourselves back on the Northern part of Ledra Street, much to my relief. We had to show our passports twice - once on leaving the occupied North, and once on re-entering the Republic of Cyprus.

It was strange, but as we walked back into the South, it felt as if an oppressive cloud lifted from the top of my head.

I was surprised and pleased to spot a Holland and Barrett, newly opened - but a quick perusal of the prices showed that it's still better value to order online from the UK: 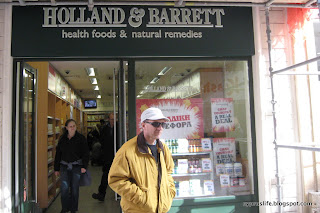 By the time we reached the small café which Richard knew of, it was nearly 2.00 and I was excessively hungry. We had a good lunch with halloumi and salad, then walked around a bit more looking at the various tourist shops. However the afternoon was starting to get a bit chilly, so, rather than doing any more sight-seeing, we returned home to Larnaka.
Posted by Sue at 16:01

I went to the North about 18 months ago. It is generally like that through most villages and centers due to an EU regulation that says nothing is really allowed to be changed. I think general maintenance is okay but not sure to what degree.