When we first moved to Cyprus, someone explained to us that the older houses - and some of the newer ones - suffer from rising damp. Because of their construction, the kind of damp proof treatment that we knew of in the UK was not possible. However, we were assured, it wasn't a huge problem. With the long hot summers, everything dries out nicely, and it's easy enough either to rub down and repaint each year when damp showed in the walls, or to have a kind of hardboard layer in front of the walls to stop it showing.

That was all very well in the house we rented, which we knew would eventually be pulled down. And those were the drought years in Cyprus. But then we bought our own house ten years ago, and there has been more rain. Moreover, since we use our downstairs floor as a guest flat rather than living in it all the time, a musty smell developed in several cupboards. Guests in the warmer months have opened windows and doors and let fresh air in, but those staying in the winter have experienced problems with mould growing on walls of one of the bedrooms, and the bathroom ceiling. It was fairly easy to wash off with some vinegar, but we started talking about what we could do to decrease the damp and condensation.

Doing some research online, we both came across the site of 'Dr Damp'. This is a company who claim to do the only reputable damp-proofing in Cyprus, and to have gained a good reputation across Europe. So, at the end of January, we arranged for them to come and do a survey. Richard went around the guest flat with the guy who came, watching the damp meter and learning about the method they use. We were told that we did have a damp problem: not yet a serious one, but it could become one in the next few decades. The system is guaranteed for twenty years and it sounded entirely reputable, if rather expensive.

Since it's Cyprus we wanted a personal recommendation rather than just affirmations on the website, and a friend remembered that some other friends had had a damp-proof system installed a year or two previously. I got in touch, and we were assured that the Dr Damp team do a great job, and are friendly and professional. It all seemed like a good thing to get done, and we inherited money from my mother a couple of years ago... so we booked the treatment for the second week of February, knowing that the flat was going to be empty from then until almost the end of the month.

Despite the company being based in Paphos, the men arrived fairly early on the Monday morning, and the house reverberated with power tools for several hours as they drilled out the rectangular holes that form the first part of the process for all the external walls.  These are what we saw, all around the outside of the house, by the end of the first day: 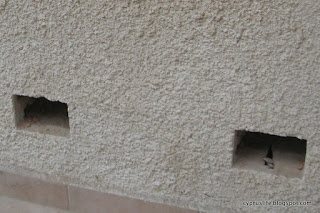 They don't go right through to the inside so it's not going to create draughts.

By the end of the second day, the special system was in place - here's a different part of the wall, showing how they had to cut away some of the paintwork to install each one. 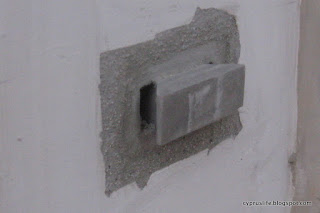 The men were indeed very friendly - even helping to rescue our cat Alexander when he got stuck up a neighbour's tree - and cleaned up all the mess they had made, roughly plastering over the worst of the bits of wall they had hacked away.

There were some internal walls that were damp too, and they had to be treated with chemicals, so we had to move everything out of the way so they could do that: 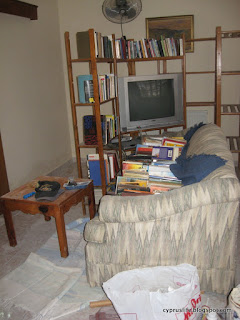 If you think that really doesn't look too bad, this is what the guest flat kitchen/dining room looked like by the time furniture and various other things had been moved to enable the damp proofing: 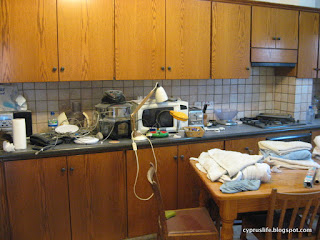 After three days the Dr Damp guys left, and we paid our teenage friend Jacob to do the plastering and repainting, and some other painting that was long overdue.

Here's the first stage, around the new system. Of course it was important not to fill in the holes around the triangular stone things: that's where the airflow, in and out, removes damp from the walls. 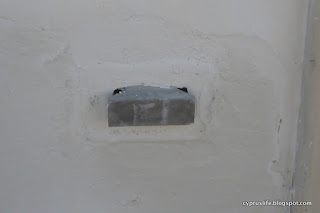 Unfortunately, in rubbing down and sanding some of the exterior paintwork and plaster, more pieces fell off, showing that the damp had indeed taken a hold in places. So Jacob worked rather more hours than we had anticipated, but did an excellent job.  By the time he had finished, the damp proof system looked more like this: 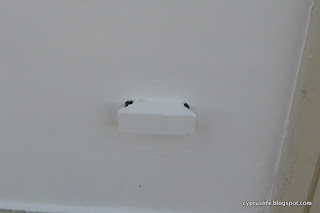 Once the sanding and necessary inside painting was complete, we had quite a job to clean the guest flat, which by that stage was covered with a fine layer of dust. So we removed and dusted all the books (only about a thousand of them, but still... quite a task), and I washed every single piece of bedding that I could find, and all the towels and curtains too.  The washing machine was in use at least a couple of times every day - thankfully it was good drying weather - and I also used our carpet shampooing machine to clean all the mattresses.

We swept and dusted and mopped several times, and I also sorted some of the kitchen cupboards, cleaning away any mould that had grown, washing all the things inside, and getting rid of some bits and pieces that had evidently never been used.

And, at last, the living room was back to its usual self, albeit rather cleaner than it has been for a while, in preparation for our end-of-February visitors: 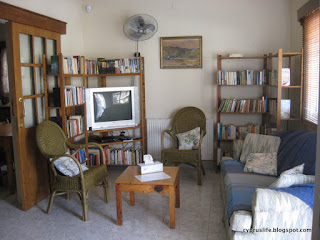 The kitchen, too, was clean and sparkling, the windows freshly washed, the floor reflecting the sunlight: 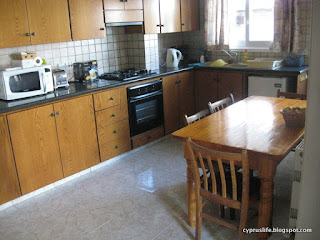 We were told that it could take two or three months before the damp smells vanished entirely, but the bathroom cupboard - which was very bad - smelled fresher within about a week, and the kitchen cupboards are a great deal less musty than they were, although not yet perfect.

This won't entirely solve the condensation problem: however, Richard is going to install an extractor fan in the bathroom, and we hope that the reduction of damp in general will make the master bedroom less likely to grow mould on the walls too.
Posted by Sue at 14:31

Nice post. We are looking at buying an older property, so this might come in handy! x

We have the same issues at my house. How is the situation one month after the installation of the system?

All good so far, but then April has been very warm and Summer is approaching so we would not expect damp problems right now. We'll know more after the next winter. However internal cupboards do smell less musty.