Our son Tim has been living in Cyprus for the past three years; initially with us, and then, for the past couple of years, in a flat he was renting close to his workplace. However he's now accepted a job back in the UK, and will be moving there in about ten days. So he and his cat have moved into our guest flat, temporarily, and the last fortnight has been spent clearing out and cleaning his flat. His landlord bought some of his furniture, some has gone into storage, and some has come to us.

I was particularly keen to have his three bookcases: two large black Billy ones which he bought from Ikea, and a light brown one which I think we probably bought at the thrift store some years ago.

I can never resist bookcases, but we did already have quite a few and are running out of wall space. We had some ideas about where to put three more, but it took most of last weekend to get them sorted. I posted on Facebook that I was 'assimilating bookcases', and someone queried the term; it sounds, after all, rather 'Borg' to assimilate something. Yet the word simply means adopting, taking as one's own, absorbing into oneself - or, in this case, into our home. Indeed, I realise it's the term I used five years ago in one of our previous acquisitions of bookcases.

The light brown one was the simplest. At least, I thought it would be. There's a space in my study where I used to have one of my bookcases, and I had decided I wanted to keep the photo albums there, rather than on a high shelf in our dining room. I am still slowly scanning through old negatives, and kept having to dash to and fro to check dates in albums.

However the one from Tim's flat was a little narrower than I had thought, so I decided to make that into my recipe bookcase at the end of the kitchen: 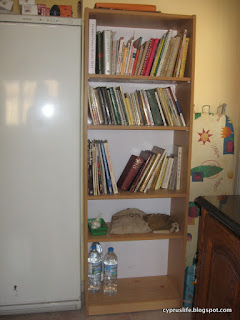 That meant that the one which used to hold the recipe books, which was a bit wider, could come into my study.  I already had a matching bookcase which held the fiction books I'm planning to read soon, my writing books and some other reference and useful non-fiction that I refer to often, so I moved those into this bookcase: 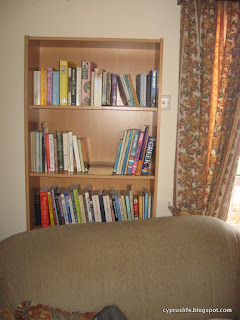 And the photo albums then went into the matching one by my desk, making them convenient to check quickly when scanning: 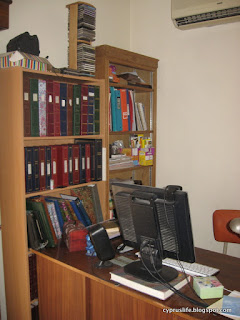 So that was the first bookcase sorted and assimilated.

We knew that we wanted one of the black Billy bookcases in our living room. But that was even less straightforward. We had a pale brown Billy bookcase that held all our DVDs, but it was - metaphorically speaking - bulging at the seams. There was no room for any new ones at all.  We had a couple of old-style dark brown Billy units that we bought from friends ten years ago, which are 90cm wide rather than 80cm, so I decided to use one of those for the DVDs instead, to give some extra space.

So the DVDs came out of the old light brown unit, and the books came out of the dark brown Billy, and that went next to the window in the living room to house our DVDs, with space for more: 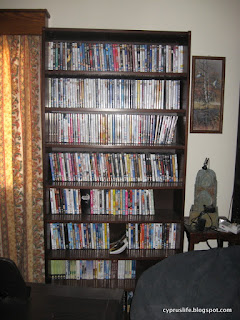 The new black Billy went in the gap where the wider one was previously. I had to move some of the books it had held into the one in the corner, but I managed to move other things around to allow for that.

Unsurprisingly, this new arrangement leaves a 10cm gap, and eventually we'll probably take the books out of the one on the right and move it up, but it's not urgent. 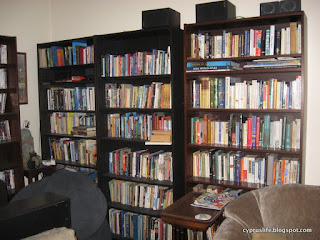 The light brown unit which previously held the DVDs was then moved up to the room which used to be Tim's, and where he will sleep on future visits from the UK. It's housing some of his theology books at present, since he's flying with just a couple of suitcases, staying in temporary accommodation until he has longer-term plans. 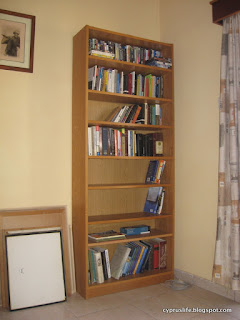 As for the other tall black Billy bookcase, I realised that could go in our dining room; or, rather, the place between the dining area and kitchen, where we had a shorter Billy that held my teenage fiction. We had the place mats and a few other bits and pieces on top of it, so it was easy enough to replace the books in the tall bookcase, and put the other things on shelves: 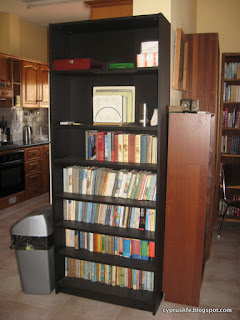 That left us with a short black Billy which sat in the living room for a while.  Eventually I realised that that could go on a convenient gap in our staircase, where we had another shelving unit that held tall art books, old computer manuals, and some folders of music that isn't currently used (piano, guitar and clarinet, primarily) but which might be needed at some point.

It fits nicely and looks much better: 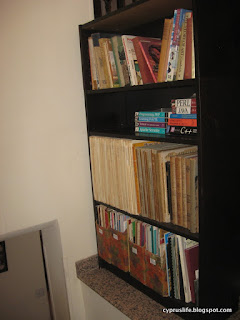 But then we were left with the slatted shelving unit which previously held all these books....

No problem; I wanted something taller in the unused shower cubicle in my study, where we keep beach equipment, cool bags, my shopping trolley and a few other random things that don't go anywhere else.

So I cleared out the old unit, which was much shorter, and replaced it with the tall one, making everything easier to access: 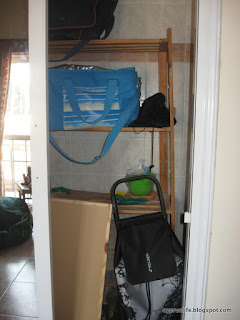 That left me with a smaller pine shelving unit... and it didn't take long to realise that it would go quite nicely in our main floor loo, where there was an ancient white (and rather tatty) unit.  It felt a little awkward at first, but looks a great deal better: 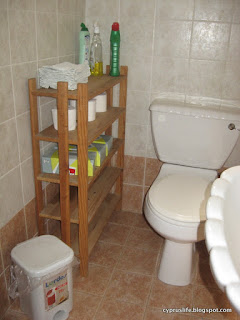 ... which left a small white unit, and I realised today that it's gone. I have no idea where.

I think 'assimilation' is definitely the correct term!