Three weeks out of Cyprus

On August 20th, I flew to the UK for a three-week visit to family and friends. This was partly prompted by the need to get out of Cyprus for a few weeks in the hottest part of the year, partly by a wish to see the family again, and partly so that I could deposit a cheque in our UK bank account which, if successful, would actually pay for the flights! (see note at the end for explanation)*

The flight took me to Gatwick arriving around 10.30pm so I had checked into a Travelodge nearby, which I reached via the useful shuttle bus. I slept well, had a good breakfast, and then returned, also by shuttle bus, to the airport. That's because the next part of my journey was by train. While I am very comfortable with buses, and reasonably so with aeroplanes, I didn't grow up using trains, and find them a little nerve-wracking, at least until I'm safely seated and have had ample confirmation that I'm on the right one.

The train was on time, and I even thought to take a photo of a station that we passed through; living in Cyprus for so long, even railways stations strike me as interesting: 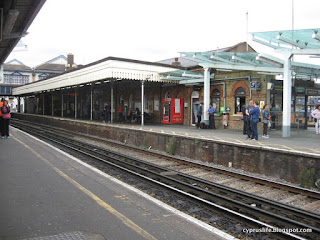 Tim met me in Surrey, where he's now living and working, and I checked in at a very nice 'airb&b' place about a mile and a half from where he is now staying. We had lunch out, and during the course of the day did rather a lot of walking - seven miles in all, he calculated - which unfortunately left my knees very painful for a while. Perhaps middle age is finally hitting me; arthritis is on both sides of the family.

So when it was time for me to return to my b&b, he introduced me to 'Uber taxis', which he booked and even paid for via his phone. Inexpensive, efficient, and quick. Technology is sometimes a good thing.

On Monday we caught a local train into Epsom, so I could bank my cheque. And while I'm not a great fan of shopping in general, I do like the variety of big UK stores, so I popped into several, becoming gradually aware that Tim was hustling me on.  I then discovered that he had a terrific surprise awaiting me: 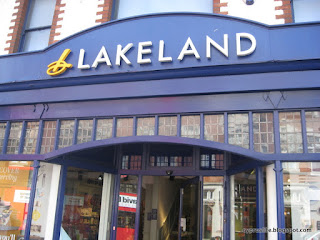 Yes!  A Lakeland shop waiting to be browsed!  I was so pleased.  Not that I bought anything, since I recently had a delivery to Cyprus from their website, but I do like looking around.  Other than bookshops, Lakeland is probably my favourite of all UK shops.

By using trains and another Uber taxi, my knees were fine by the end of the day. But we were both tired, so we decided to spend Tuesday in a large park about mid-way between where we were both staying. The weather was warm, the benches inviting, and we both had our Kindles.  There's a small library in the park so Tim joined it and took out his first book. 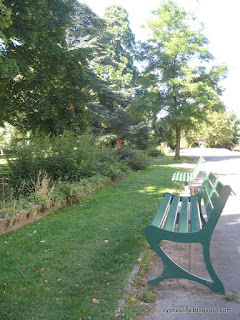 We had lunch at a nice little cafe set around the back of the library, and in the afternoon I was able to meet up with a university friend who lives just a few miles away, and whom I had not seen for 34 years. It was very good to catch up. 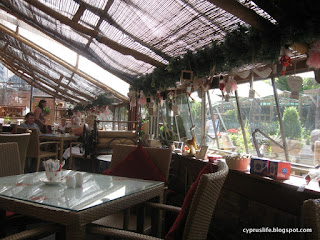 On Wednesday we caught more trains to go and visit my mother-in-law who lives about an hour's journey away, and on Thursday we decided to hang out in the park again and have another quiet day. We watched the birds on the lake: 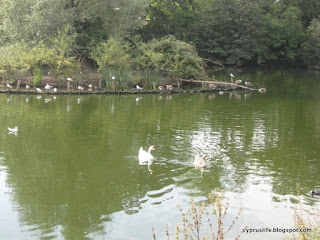 ... and I had a sudden craving for ice cream. Joy of joys, the little cafe sold Magnums: 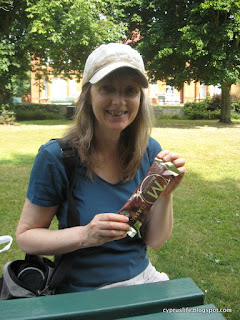 Tim, being dairy-free, had to have a Calippo, and we were a little startled to notice that one of the three languages on the side was Greek: 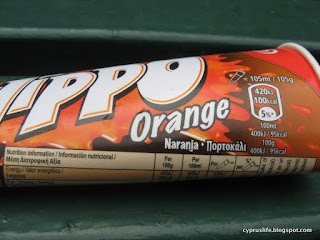 We had dinner out, in the evening, with my aunt and uncle who are also about an hour's journey away, and then on the Friday I got on another train to travel to the Midlands. Actually it was four trains in all: three normal ones, and one London Underground. I was particularly nervous about the Underground as I'm not at all familiar with it, but was reassured to learn that it was a fifteen-minute journey, and I had an hour between my two trains.

I was met at Stratford by my father and his wife, in good spirits and, happily, good health, and after we arrived at their house my sister and niece arrived for the day.

We had a delicious lunch, which included this wonderful looking (and even better tasting) cheesecake: 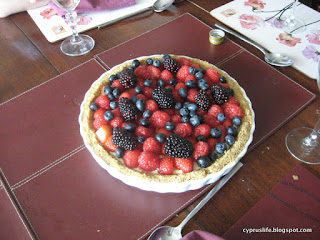 On Saturday we spent most of the day with some step-relatives, on Sunday we went to the local church and had a peaceful afternoon. On Monday, which was a public holiday in the UK, my two brothers and their wives came for lunch and the afternoon, and when we went for a walk we took some carrier bags so that we could collect some local blackberries: 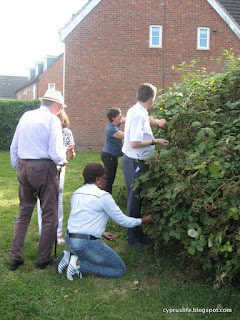 The following day we drove into Stratford so my father could buy a reconditioned laptop, and it was a beautiful day: 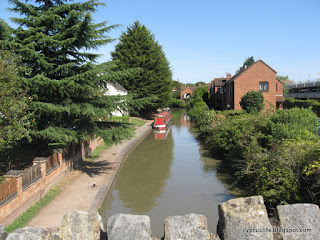 Among other things we popped into the Stratford Lakeland - not a surprise this time, as I knew it was there, but still interesting to see: 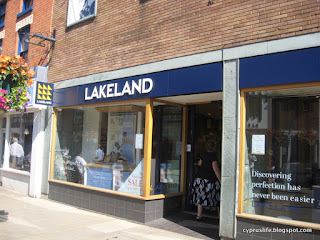 And here's the obligatory photo of Shakespeare's birthplace: 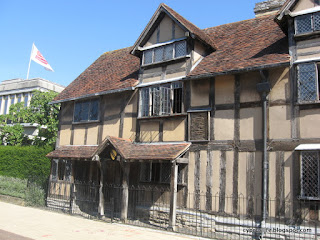 The rest of the week passed peacefully with local walks: I was very interested to see this telephone box. It's not exactly a tardis but nonetheless a great deal bigger on the inside than it appears, since it functions as a local free library/book exchange: 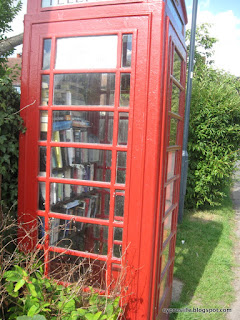 The week passed happily, doing a bit of gardening, and on Friday I caught another train, this time to Birmingham. I was met by one of my closest and longest-standing friends who treated me to lunch in the Art Gallery, and we then looked at some of the painted benches that have been part of a schools 'book' project. I particularly liked this one portraying Alice in Wonderland: 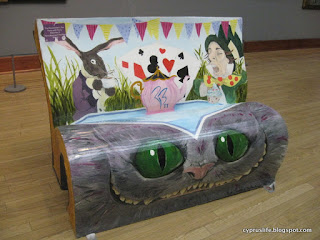 Outside, Birmingham seems to have endless construction work; it's different every time I visit (which, admittedly, isn't all that often!) 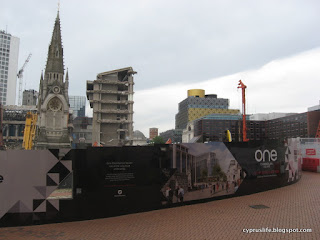 I stayed for the weekend, spending lots of time catching up on our lives and families, and also meeting my friend's new grandson - the son of my goddaughter - who is delightful.

And then, at last, another train, up to Carlisle to see Daniel, Becky, and my wonderful grandson David who has just turned two-and-a-quarter: 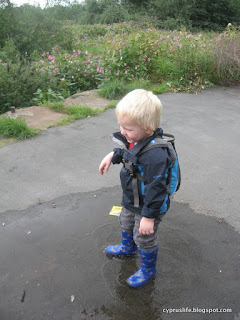 The weather wasn't nearly so good as it had been further south; but then September had started.

David is very lively so we went on lots of walks: 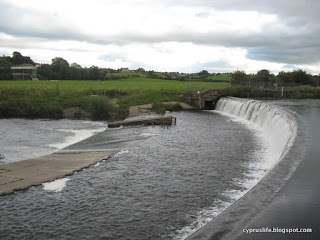 He's interested in everything, but most of all anything technical or mechanical. Here he is, pausing to look at some diggers... 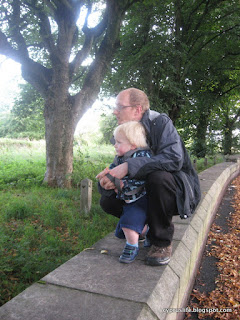 The time went all too quickly, and on Saturday I caught yet another train to Manchester Airport, and flew back to Cyprus. I wasn't prepared for the humidity, but at least it's a few degrees cooler than it was when I departed three weeks earlier.


*I mentioned back in April that my flight to the UK then was delayed by 24 hours. We put in a claim, and within a few weeks of my return I was sent a cheque for 400 euros. I was surprised at how easy it seemed to be, from a budget airline that isn't renowned for paying out compensation claims quickly.

The first problem arose when I tried to deposit it in our Cyprus bank account. At the bottom was a note saying that the cheque could only be deposited in the UK. Bizarre, I thought, since it was a euro cheque, but Tim was flying to the UK in May, so I signed the back and made sure he had our UK bank account details, and passed it to him. When he tried to deposit it, he was told that I would have to authorise the commission charges and exchange rate, so it could only be deposited by me.

Since the cheque was going to expire within six months of issue, it was the final push I needed to check details and arrange to visit various family members for three weeks in August.