Time and Trust in Cyprus

A couple of weeks ago, I wrote a lengthy post bewailing modern technology as it gradually takes over life in Cyprus. Things are no longer as simple as they used to be.

To summarise the post: I couldn't pay our van tax because it needed an MOT, and when the MOT was done I couldn't pay it because my debit card had expired. When I went to collect my new card from the bank, they had returned it because I hadn't collected it in December, despite not knowing it was there. Meanwhile I couldn't pay our PO Box fee because the 'system' wasn't working, so I left the money with the postmistress who assured me she would do it the next day...

There's something about starting a routine, or habit, which makes it become easier as the weeks go by. Those two Fridays in January, I made sure I had things to post to motivate me to walk to the Post Office. It's only a mile away, and it wasn't as cold as it had been some early mornings when I walk with my friend Sheila, but I didn't much want to go out. However, Richard was away, and I don't drive.

I decided to combine the trips to the Post Office with my usual Friday shopping at our local froutaria... 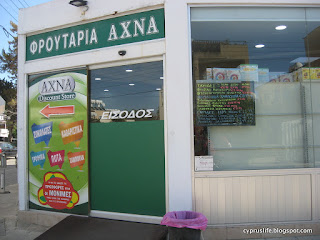 ... and the connected mini-market over the road from the froutaria: 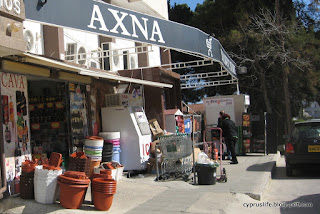 The Post Office is about a mile from our house, near the sea-front. It's another mile or so in the other direction to the fruitaria, and then a short walk home. Quite a pleasant outing, once I was out in the sunshine, even if it was rather chilly.

So each time I took my Lakeland shopping trolley (one of the best purchases I have ever made): 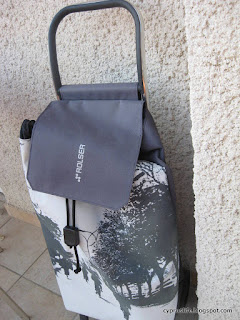 A few days after my foray into the bank, they phoned me to say that my card had arrived.  I could have gone to collect it at once (the bank is perhaps half a mile away) but decided I would leave it until the Friday, and do another round trip.  There was no urgency to pay the road tax, and I didn't need the debit card for anything else; I generally use cash at the froutaria and discount mini-market.

PO Box Rental part 3
So on Friday, just over a week ago, I walked down to the Post Office once again. There was no receipt in my box, so although I didn't have anything to post this time, I went inside.

Once again there was only one postmistress there, not the one to whom I had handed over the cash for the box renewal. She remembered me from the previous week. I asked her if, perhaps, the other lady had done the renewal and forgotten to give me my receipt. She checked the system, and said that no, it wasn't renewed.

However, she told me, I wasn't the only customer in the same situation. Apparently the other postmistress had been off sick, and had put the money for the PO Box renewals in some account which her colleague couldn't access.  She assured me it would be done on Monday, and they would phone to let me know.

Perhaps I should have ensured I was given a receipt for the cash when I paid it; or, even better, kept it and said I would return another time, since I did in fact keep on returning every week. But trust is important in Cyprus, and I couldn't imagine they would try to cheat me, or insist that I hadn't in fact paid anything. So I said it was okay, and I would wait.

New Debit card part 2
I quite like walking along the main shopping streets of Larnaka, occasionally popping into a shop, or looking in the windows, but my next stop was the bank.

I stood in the queue, as usual, and when I got to the front was told I needed to go to one of the desks further inside the bank. I eventually found it, and instead of just handing over my card (in a thick envelope) and asking me to sign for it, the man at the desk had to access my account, and spend several minutes entering things and eventually succeeding in printing a form. Then I not only had to sign it, I had to enter my passport number. I have no idea why, but it's a good thing I carry it with me. It would have been very annoying to have got that far and been unable to collect the card.

The design of the card is different - it's yellow rather than red - and it's equipped with contactless technology, which always slightly scares me. But we keep our contactless cards in little metal-lined folders so they can't accidentally (or maliciously) be triggered.

Car Tax part 4
I got home, and logged into the jccsmart website, and - at last! - succeeded in paying the year's tax for the van.

Side note
A few months ago, when we realised we had to write off our two old cars, the mechanic agreed to deal with the scrap merchant, and harvest any parts that could be used. They said we might possibly get €200, and that was only because one of the cars had fairly new tyres. They were supposed to let us know when the transaction happened, but we didn't hear anything. Then we went away shortly after Christmas, and hadn't thought much about it.

When Richard got back from his travels, ten days ago, he went to collect the van after its MOT.  They had had to sort out one or two things, and did a full oil change too, and - including the test certificate - the bill came to €70, which seemed quite reasonable. Better still, they said that our old cars had in fact fetched €250, so rather than having to pay anything, he was given €180 in cash as well as the van with its up-to-date MOT.

PO Box Rental part 4
There was no phone call on Monday, but on Wednesday I had a call from the Post Office! They wanted to check the details, then went ahead and renewed our box rental for another two years.

The receipt was awaiting me when I walked down to the Post Office yesterday.  So everything is now done. It might take much longer than it should, but I should have trusted that it would work out correctly.
Posted by Sue at 19:01